Share All sharing options for: Bari 0 – Inter 3; Wesley, the Return 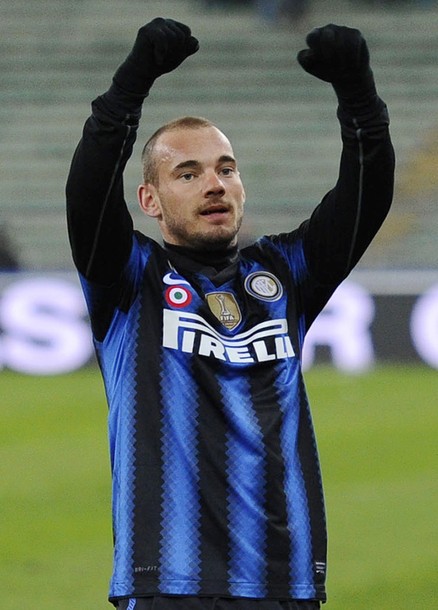 I just want to say this: Ranocchia and Pazzini are still rotting on the bench.

This was an important trip for the good guys in black and blue. All the teams that they were tied with or were above them in the standings either lost or were held to a draw. Inter were able to make up some squandered points on Napoli and Lazio.

So the win was important for several reasons. We took advantage of this opportunity. The next step will be to try and make it meaningful by not losing ground. 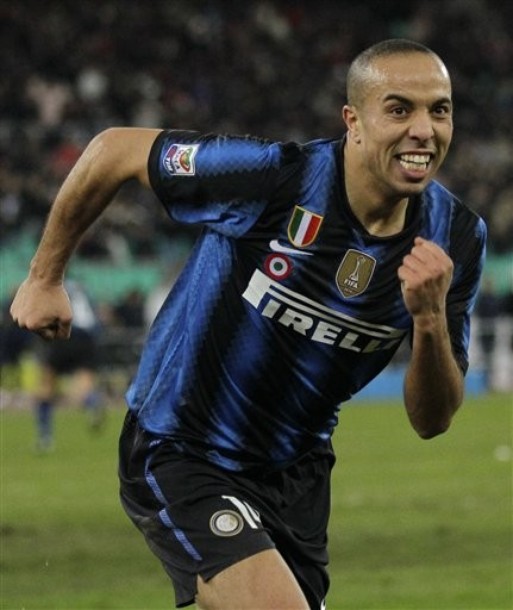 Julio Cesar: The Lizard King is a good Serie A goalkeeper. But he never had the range and aggressiveness of Cesar. In past games I was urging Castellazzi to get off his line. Cesar saved 2 goals that with a lesser keeper would have gone in. Nice clean sheet Weepy. 8.5

Maicon: I thought Maicon had a great game. His passes weren’t always there and he shot when he should have passed twice, but he essentially ran the offence from the fullback position and he hustled up and down the sideline. I can’t ask for more than that in a mid week. 7.5

Ranocchia: Froggie did a-solid game, and he did ride, uh huh (I couldn’t find the Dylan version). Generally he was the cool head in the back and no matter how hairy it got he did very well to get his body in front of the ball, which is always job one. A very solid performance. 7.0

Materazzi: Everyone, including me, panicked that Matrix was in the game. It turned out that Leo knew more than we did. Matrix did his job and did it solidly. He got a yellow for getting to the ball first and getting kicked in the process, without freaking out. The kid back there makes him calmer and more thoughtful. 6.5

Chivu: Well, I don’t really know how to grade Cris. He was solid and even contributed to the attack a little. But, The Black Out Stupidity kind of taints everything doesn’t it? 4.5

Zanetti: The Captain took his time making his presence felt, waiting until the second half, but he did show up. Can Javier finally be feeling his age with all these games on top of each other? 6.0

Motta: There was discussion in the LiveBlog about whether or not Motta is a good fit for the 433. I contend that he isn’t because he doesn’t have any range and needs to be right in the middle. Others contend that he’s a good fit because he can set up 3 attackers from deep. If we had an in form Cuchu and Mariga, I’ll concede the point. Otherwise… well, we did better later in the game with more midfielders to take up the slack, didn’t we? It was Motta who sent Pazzini clear on goal. 7.0

Kharja: The New Guy ran his ass off today, all day, and people know that means a lot to me. His first half was even – he ran and pressured well but didn’t pass well. After the half he played better and the goal was totally deserved. The assist for Wes was very classy. 7.5

Milito: Not a good game for Milito, who could have used a day to rest. As it is, he only played an hour, but it could have been 15 minutes too long. 5.5

Eto’o: I didn’t think that Eto’o had a great game but he still made runs at the defense and he made some nice passes. I think he had one nice shot. It was a pretty assist he had to Kharja, though. 6.5

Pazzini: Nutso was by far the most active forward going today. He also was knocked down about a dozen times before he got one call in his favor. But when it counted he was around the ball and the net. He’s showing a real nose for the opportune strike – dare I say like Milito last season? 7.5

Yes, it was terrible. I don’t know why he did it, it sounds like he doesn’t know either, but I don’t really care, either. It’s done. He’ll get suspended for multiple games – anyone who thinks that he won’t because he plays for Inter is a moron (remember last season, Cuchu was suspended for a fight that no one – including the members of the other team “supposedly” involved in the fight – admits to actually happening).

I bet that he gets at least 5 games. Here’s the incident:

At the end, you see Matrix talking to Rossi? He’s telling Rossi to calm down otherwise he’ll get thrown out on top of being punched. Cesar was very smart pulling up his snood while talking to Chivu so that his lips couldn’t be read.

Morons and people who can’t read will probably think that posting the televised apology that Chivu made to Marco is somehow excusing Chivu for his actions. Other morons will try to paint all the supporters and players with the same brush. It’s okay. That’s what morons do. Chivu will get his “enforced vacation” and he’ll deserve it. The world will continue to spin. Gravity will still be there in the morning. 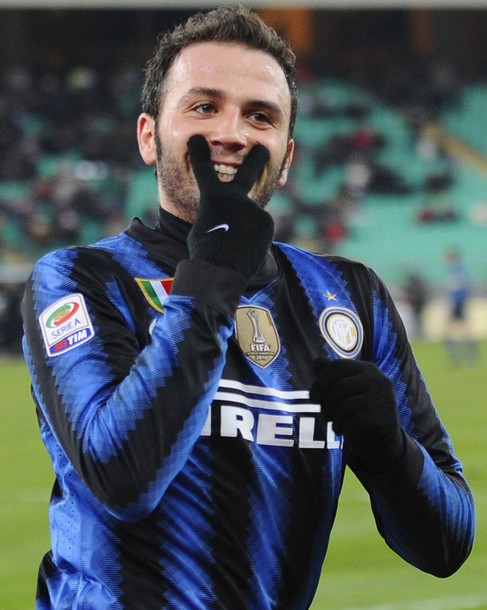 It was a game of two halves.

Okay, sorry about that, but it could have been worse. I also considered starting: It was a dark and stormy night.

Seriously, the game had several elements to it that were interesting.

Post-Wes the team had a roving check-to person who was able to get anyone out of jam or screwed up the defensive zones enough to allow someone else to make a run. That person was always looking to advance the ball and make the easy pass. It was nice to see him play again. He’s like a little Tasmanian devil spinning here and there leaving chaos in his wake.

Another element to the game, but not as nice is how the players reacted to playing the 433. It often seemed as though we were out manned in the midfield. I still content that we need lung busters who have range like Cuchu and Mariga to harry the passing lanes in the middle of the field and tackle in front of the defense so that Motta or Sneijder can have enough energy to make tight passes and advance the ball. 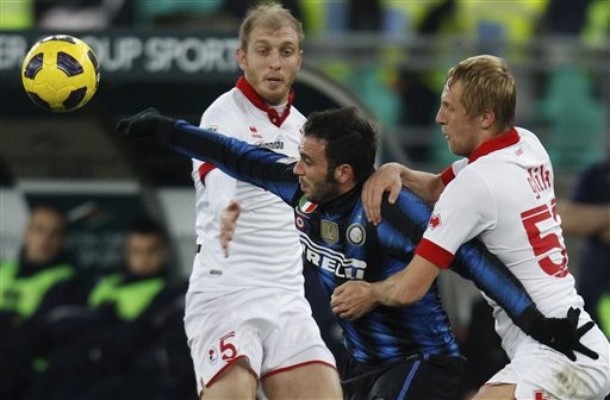 Today we were outmanned with too much pasture – and I am not kidding about ‘pasture’, did you see that field? - to cover. I thought that Kharja did well, but Zanetti, a converted fullback, isn’t going to thrive in this set up. And Motta was too deep doing too many things to be effective passing the ball forward.

Plus, I thought that our forwards got in each other’s way, especially Milito and Pazzini. It doesn’t help matters that they are similar in that they are both very opportunistic looking for the same opening or the same pass up the field. Eto’o stayed wide and cut into the middle. Both Milito and Pazzini kind of hovered around the middle a bit.
Another element to this game is the new signings. Starting from the beginning Ranocchia, Kharja and Pazzini had a huge impact on how this game ended up. How about Branca bringing in exactly the right type of player to fit into this team? Compared to all the other teams in Serie A, the Inter winter transfer market looked like the one that actually had a plan or some organizational forethought. Everyone was young-ish. Everyone could start right away. Everyone could help the team for years to come if things worked out well. And it was cheap. Very nice.

Going forward with Wes looking good and Deki supposed to be back in two weeks or so we might finally be in a decent position to rotate players and use the depth for something other than emergency use.

This one was easy for me. Julio Cesar kept us in the game until we got Wes into the engine room. Like I said before, Castellazzi is a good, solid Serie A goalkeeper, but Cesar is special and you can tell the difference easily. He’s the best keeper in Serie A and has been for a couple years now.

Congrats to Maryam1908 and dvdlll here’s your money! 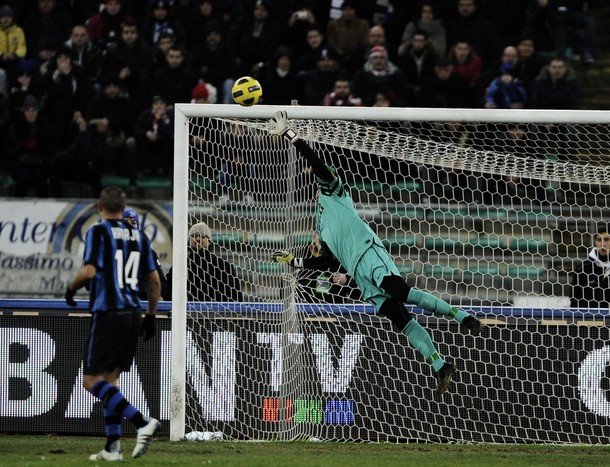