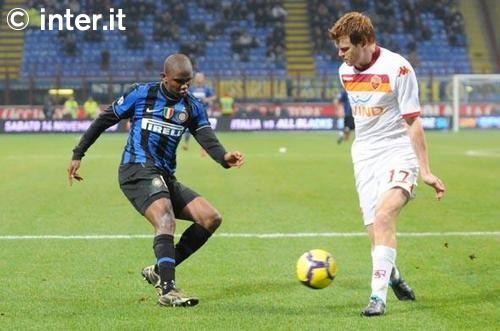 This game fills me with dread. Inter has had a terrible run of injuries recently and I know both teams will fight tooth and nail for the three points on offer. As if the squad wasn't tired enough.

What: Inter v Roma,
Where: San Siro, Milan
When: Sunday, February 6, 8:45pm local time (11:45am pacific, 2:45pm eastern)
How to Watch: Live of Fox Soccer Channel, or one of these channels, or find a stream (MyP2P, Rojadirecta, Ustream, and ATDHE.me).
Liveblog: Abso-freaking-lutely. Fifteen minutes before kickoff. Be there or be square.

This match is going to be one of the toughest Inter will play all season. Despite the club's financial difficulties, Roma are a pretty good team. Certainly, they have been a thorn in Inter's side for a few years now. The stats look ok (79 Serie A games: 42 wins, 25 draws, 12 losses; 149 goals for, 78 allowed) but what they dont show is that Inter hasn't won this fixture since 2005 (thanks to a brace from Mihajlovic). That game was followed by two losses and three draws.

Last season, the game finished a strangely subdued 1-all. Which is strange because usually this match brings out the best in both teams. As I recall, the most interesting thing that happened was that DeRossi got injured (fractured cheekbone, I think - I cant be bothered to look it up). It could be, though, that the previous two years games were so exciting (a 3-3 and 1-1) that they just overshadow this one.

Anyway, here are the highlights:

I am not going to take a whole lot of time here as there is a very well run Roma board here. I am sure Chris will have a preview up with everything you could want to know from a Roma point of view. Basically, all we care about is that they they are just two points behind us on the table (at 39) and a win will give us a bit of much needed space.

As for possible lineups, Mexes is suspended and Adriano has some shoulder issue so neither of them will be there. Too bad about Mexes - I really enjoy his pouty, stompy, little girl tantrums he pulls out when things are not going his way. Totti didn't even make the trip to Milan. He has the flu. The sad thing is, the squad may be just fine without him - they may not even really need him. It sort of feels like we are at the end of an era with him. 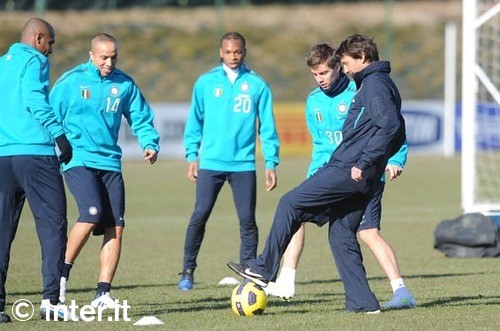 Leonardo goes back to basics: "This is a football. You kick it with your feet."

Leonardo has called up the usual suspects:

Stankovic, Lucio, Mariga, and Samuel are injured. Chivu is, of course, suspended. Interestingly, Maicon will play his 200th game for Inter tomorrow (we are all agreed, he will play, right?). All I can say is that it is nice to finally have the real Maicon back. 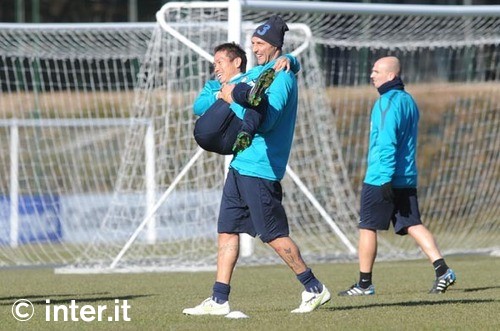 Now for a limited time only, you too can have your very own life-size Nagatomo action figure. Available only at the Inter store while supplies last.

As for others who in the lineup, I guess the real question is whether or not Leo will throw Nagatomo to the wolves or not. Perhaps it would be more prudent to start with Zanetti back there. This just seems like an awfully important game and experimenting with defense scares me a bit. I know, many of you say he Yuto is good, but, frankly, it is one thing to beat Australia, quite another to take on Roma at the San Siro (no offense, Australia).

La Gazzetta thinks he will start. They predict:

And aside from my previously stated worries over Nagatomo, that lineup looks pretty good. Certainly, I trust Cordoba in defense. Sure, he is old, but he is a good balance for Ranocchia. Of course, if you think you know better, I invite you to post your line-up below. You could be the next Grand Imperial Poobah of All Things Inter. 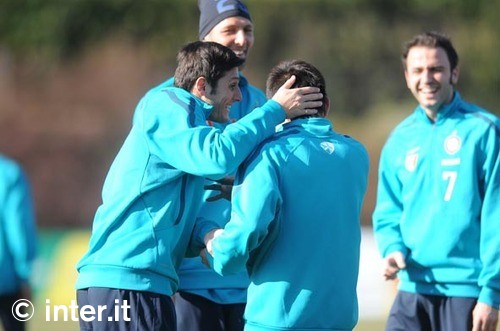 Even Zanetti is taken with Nagatomo.

I think it is fair to say that I really want to win this game. Not only do we need the points (a quick look at the fixture list shows relatively easy opponents for Milan and Napoli), but there is something satisfying about beating Roma that transcends simply three points. Oh, and there are only three champions league spots (the fourth is for suckers), and, with Udinese creeping up the table, six teams who want them. Taking down a direct competitor is a must for those who will end up in one of those spots come May.

Really, lets just win this one.