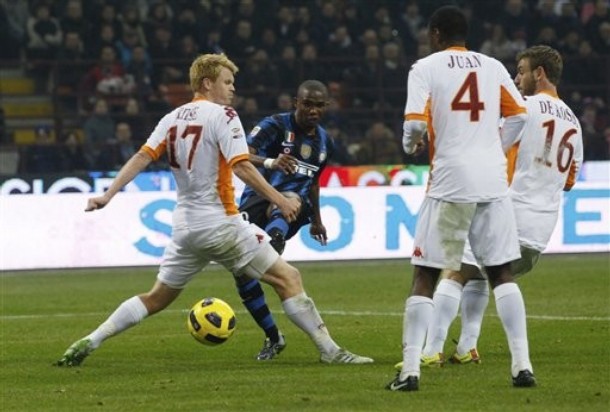 Was Jon Arne Riise beaten today like a red-headed step child, literally? Anyone know the marital status of Jon's parents?

Inter now possess the league’s best attack (in case you were wondering, 8 teams have let in fewer goals so I guess we can forget about “reliable defense”). Scoring 23 goals in the 8 (nearly 3 per game) games since Jan 6 as Inter has, will go a long way to doing that. The form sheet looks like this from Jan 6: WWWWLWWW. Basically since the winter break we have 21 out of 24 points.

In my opinion this is about Champions League qualification. As of right now, there still is no Scudetto race. We are in 3rd place, 5 points adrift. Napoli and Milan are the only teams that can open any race for the Scudetto by dropping points. We are in the driver’s seat for a Champions League place, but that’s it, as of right now. If we finish the season with anything more than this, it’ll be gravy. Right now, with the hole we dug ourselves earlier in the season I think that, sensibly, a Scudetto fight would be a nice bonus.

Maicon: It took all of 15 minutes for Inter to find, like water, the easy path to goal. Maicon helped make Riise's day miserable by attacking him wave after wave time after time. I thought he should have done better at the first Roma goal though. 8.0

Ranocchia: Very solid. He looked a little nervous at first but looked great in the second half. This much is certain, he’s never had a game this big or tense before and I didn’t spot a real mistake. 7.5

Cordoba: He had 2 shaky moments in the first half that others, Motta and Cesar mostly, had to bail him out of. It was mostly okay. 6.5

Zanetti: Roma’s first goal was set up by their right fullback going down the field to Inter’s penalty area without anyone picking him up but Javier, who was marking someone else, moved to pick him up too late. After that, Roma got nothing on the left while Javier was there and when Javier moved to midfield he was a monster there too. Javier always seems to have a good game against Roma. 8.5

Cuchu: I thought Cuchu was good, not great. He was able to cause a lot of trouble further up the field with Motta hanging back. The goal was awesome. I love watching him celebrate, it’s like he wants to hug the whole stadium! 7.5

Motta: He scored a goal. He took a hand to the face that somehow wasn't a foul. He took a Riise free kick in the stomach rather than allow Riise a chance at a cheesy score. He deflected what looked like a sure goal with a last minute intervention that had the ball deflect, hard off his back. And this is the best part… he celebrated the deflection like he had just scored. He’s got balls and he’s smart as a whip, if you know what I mean. Every team needs a guy like him. I now dub him Dirty Harry Motta (at least for my reference), because he does all the shit jobs. 8.5

Kharja: New Guy was totally screwed by the ref today. Kharja’s job today was to play defensively and cover for Maicon. In the first half Kharja made 2 He-Man tackles in which he got ball and were totally legal. Of course he was called for a foul and then cautioned. In the second half he continued his mission of good defense and was able to keep from getting sent off. Only negative on the day was that Vucinic was his marker on the free kick for a deflection goal to make it 4-2.7.0

Sneijder: What a game from Sneijder. He was the roving outlet pass for the entire field. He was the option at the top of the area and scored a wonderful goal. He passed the ball to Pazzini to send him through on goal. He makes the cross that Eto’o heads to Dirty Harry Motta for a score. He was beautiful today. 9.0

Pazzini: Nutso was virtually invisible for three quarters of the game. When he woke up, he set up a legitimate pk and sent Burdisso, correctly off the field. The man has a direct hand in 9 points that this team has earned this winter. Not bad at all. 7.0

Leonardo’s decision before the ball was kicked at 2:45 Est. U.S. was for Inter to attack the weak Roma fullbacks. Pazzini and Eto’o set up widish and fullbacks Zanetti and Maicon came up to give support and join them. Cambiasso, Kharja and Sneijder filled in just outside the penalty area and smushed a bit in the middle third of the field lengthwise.

Pass the ball around the outside prodding here and there trying to make space for someone in the interior channels to get a good look at the net and this is how Inter attacked the Roma goal. I said this at halftime on the Liveblog, but someone, Leo or Beppe, on purpose even moved Eto’o to the right so that he and Maicon could terrorize Riise together and take advantage of the fact that: 1. Riise is an average defender at best 2. Whoever was playing infront of Riise was making matters worse by not coming back to help on D. It seems like such a small thing to take advantage of, but it was seen clearly and as bright as day ridiculously early on in the game.

I wish I could easily detail an equally intricate plan for Inter’s defense that I observed. As far as our defensive failings go, we have Lucio out. We have Samuel out. Ranocchia is proving himself as an argument to the discussion Who Will Be Our Starting Defenders Next Season but he’s young and he’s never been on a team that HAS to win every time they step on the field. Cordoba and Matrix look past it, of course.

The team is also risking more going forward. It’s like a Newton’s Law thing. You can’t decide to attack more and especially attack more out wide-ish without a reaction. That reaction is going to be teams counter-attacking more and in more dangerous position. As they counter, we would have to overrun the ball and try to control the center – as one would do at all times. Combine that with not having a lot of continuity with Cordoba, Motta, Ranocchia and Lucio; keeping goals out is going to be an issue.

Thank goodness we have that whole #1 attack thing going otherwise we wouldn’t have anything to hang our hat on.

Using Kharja as mostly defensive cover was a good decision. He has excellent range and for what I always considered as an attacking midfielder type, he has an excellent tackle. He was the possible match against Vucinic, who is a very mobile forward, that we had available. He was very much hosed by our old "friend" Tagliavento when he called two fouls on Kharja in which both instances were just good tackles. In the second half, Kharja had to shadow more than tackle since he was on a yellow, but his good range enabled him to do so and stay on the field.

I was skeptical to see Motta in the DM role again. I have been having worry spells about this because Motta doesn’t cover a lot of ground in the same way that Cambiasso, Mariga (remember him?) or Kharja do. But keeping him tethered to the center of the defense meant that Roma had to also attack the channels. Leonardo and Beppe must have been happy to see Roma try over and over again to try and attack the middle of the defense only to have to turn away or turn it outside over and over. And let’s be frank, Roma only scored once from open play – the other two being a freaky free kick deflection and a corner. The defense really did their job in open play. We just need to work on those set pieces more… and more and more and more and more and more…

[EDIT] I was going to include something but I completely forgot about it, so here it is: I wanted to give some kudos to the home supporters in the stands on Sunday night for waving the toilet paper or the cloth or whatever it was they were waving at Tagliavento. He deserves all that and more. 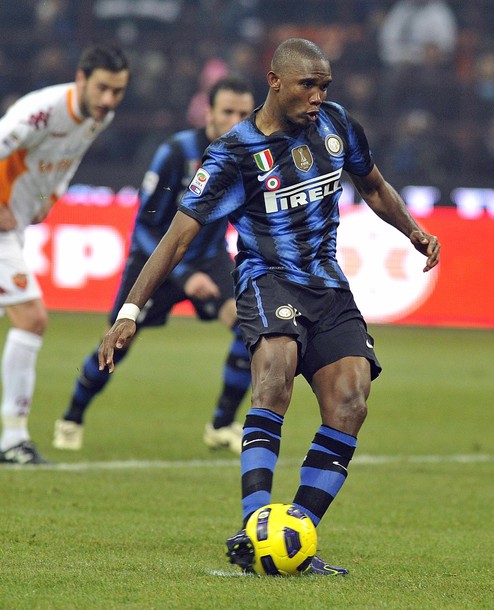 No player worked harder for this win than Dirty Harry Motta. The newish position, the tackles, the passes, the goal, the sacrificing of his body and the willingness to take one - or two - for the team… Motta was Magnificent.

But, I can’t in good conscience decide against The Lion King either, who had an absolutely monstrous game that stuck out farther than Riise’s head on an overhead cam.

So I am giving the MIPOG to Eto’o. But fair warning, in the future I will be looking for a reason to give it to Motta. I believe that there is a connection between Leo coming in to the organization, Motta being a regular participant on the field for a long stretch starting on Jan 6 and our very good form also starting on Jan 6. I think that Motta is a very good fit for what Leo likes to do as his deep lying passer.

Here you go: Skyder, GXE and gotTreble?. Skyder and GXE got the double, so you guys get double the cash. Great job! 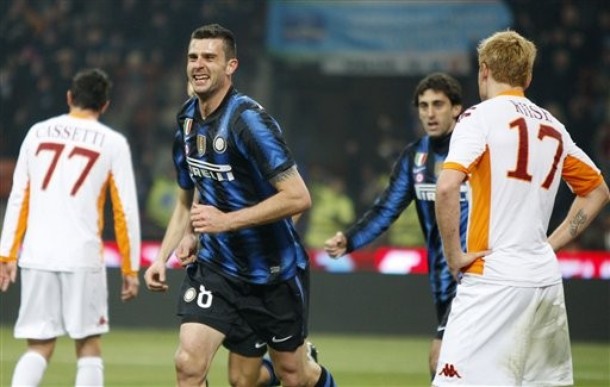 Say, that wouldn\'t be Riise there in the picture, would it?