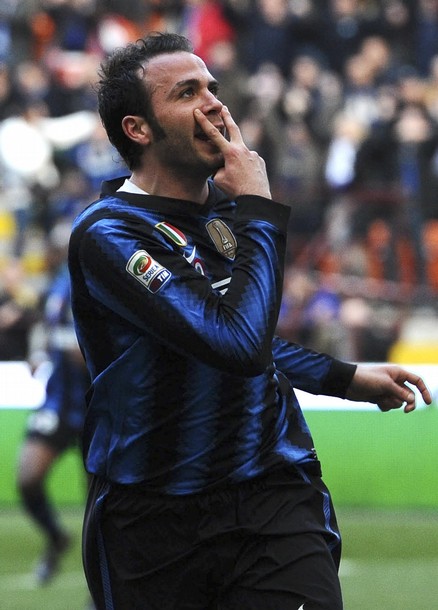 The Curva Nord was singing the above in quotes towards the end of the game yesterday. Allow me to translate for those who aren’t fluent in Italian:

A couple of quick thoughts regarding our manager:

1-0 safe victory late in the season over a relegation zone team.

A manager yelling at the ref hoping to redirect the ire of the official towards the sideline giving his player a chance to re-compose himself.

Remind you of anyone else?

Cesar: Saved a sure goal that would have been disastrous for us and snatched a goal scoring opportunity away from Lecce preemptively. Kept a clean sheet. 8.5
Maicon: Very subdued today, but more importantly, was at his post defensively all night. 6.0
Lucio: Very average game for Lucio until he decided to be a complete moron. 5.5
Chivu: Very good game from Chivu as he deflected and intercepted everything. He had his own moment of madness as he tackled with 2 foot slide that was justifiably booked. More importantly he didn't head the ball to Lecce's attacker on a corner. 7.5
Zanetti: Javier saw a lot of action as Inter spent a lot of time attacking and defending on the left. 6.5
Motta: I didn’t think that Motta had a great game, although his caution was kind of harsh. 6.0
Cambiasso: As with Motta I wasn’t thrilled with Cambiasso’s game, but the formation isn’t really made to spotlight the DMs. 6.0
Pandev: Made the final pass that Pazzini scored on and in general I thought he did well. More importantly he kept up the good play from Tuesday. 6.5
Sneijder: Made the pass that we all thought that Pazzini should have scored on minutes before Pazzini actually score when he floated a perfect cross that went right off Pazzini’s melon directly to the keeper. Personally I thought that Sneijder looked much more at home in this position where he can dictate and set tempo instead of the 4312 where he just tries to make a final pass. 7.0
Eto’o: Proving that he’s human, Eto’o looked tired. You know what; the fact that he can look human makes the other shit that he does that much more awesome. 7.0
Pazzini: The 1 in the 4231 has to score. There isn’t really much more option. The wide guys can score but the angle they are shooting from isn’t great. The Sneijder position in this formation also has scoring opps but by definition all the passes coming to Sneijder wouldn’t be as great as the ones that he could provide. Pazzini scored and when he was given 2 other good pieces of service he almost did then too. Pazzini is a finisher, plain and simple and looked very dangerous about 3 or 4 times yesterday. 6 goals from 10 games is exactly the right ratio to have. 7.5 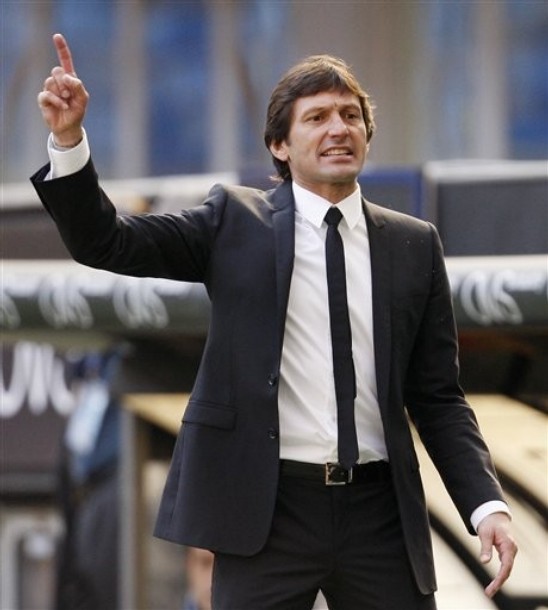 Well, I remember, even if some of you don’t. And thus far, it’s all been hot air and wasted bandwidth.

Leo has grown as a coach because I saw him try to do the same thing Mourinho did when he first came here. The first thing the two of them did was try to install the 433 with a high defensive line. It didn’t work out for either of them. Mourinho kept trying, but Leo more or less gave up the ghost when Milito pulled up. But both went back to the 4312 and we were successful with it – up to a point when the lack of width inherent in the formation and our team was being exposed – again as it happened to Mourinho while playing in the Champions League – again as it happened to Leo.

It’s a little frightening, isn’t it?

But here’s where the similarities bifurcate, like a pair of pants. Leo, although acknowledging like Mourinho that the 433 is never going to happen and acknowledging that the team can do well switching from 4312 to 4231 as needed, hasn’t yet learned that we don’t have the players to stick our defensive line so high as to be on our opponent’s side of the midfield line. We don’t have the players to play a high line and play safely. Essentially, Leo has gone down the wrong pant leg of our defensive line.

Last game, against Bayern I said that we were attacking with too many people to defend efficiently. It looks like we have solved the numbers problem; we just need to tweak their positions when we attack now. Our issues yesterday occurred when we are not with our backs to the goal and we are not defending in our set arrangement of 4 defenders and 2 midfielders. When we are set and you can see the 2 lines going from sideline to sideline like two ranks of soldiers on a chess board I feel confident. Running for our lives backward trying to angle our bodies to shield attackers left or right as we make split second decisions under extreme pressure is not our strength… in fact I don’t think I can name a team that does really well in that situation.

We need the center backs to drop a bit. We need them to be able to come foreword and attack the ball, even if it’s in the center circle. Hoping that one of Chivu, Ranocchia (who has actually proved to be a lot faster than I thought) and Lucio can win a foot race with any of the strikers we face who might play counter attack off the shoulder of the last man is not ideal in my book.

But the trade off is that we get center backs as a last ditch cushion when we are in possession in the final third. As handy as they might be, I would prefer that they play a bit smarter.

And that’s really my only gripe about the game. I thought that we made a huge improvement in defense actually considering that we kept a clean sheet and that limited our opponent to only a single shot on goal.

We were tired, coming off that incredible win in Germany and frankly I don’t think that we were thinking Lecce as much as Derby, International break – which is a HUGE deal to the South Americans, and Champions League draw. All due respect to Lecce, but I wouldn’t be surprised if Leo spent a lot of time in the dressing room saying, “Concentrate on Lecce… Concentrate on Lecce, dammit!” 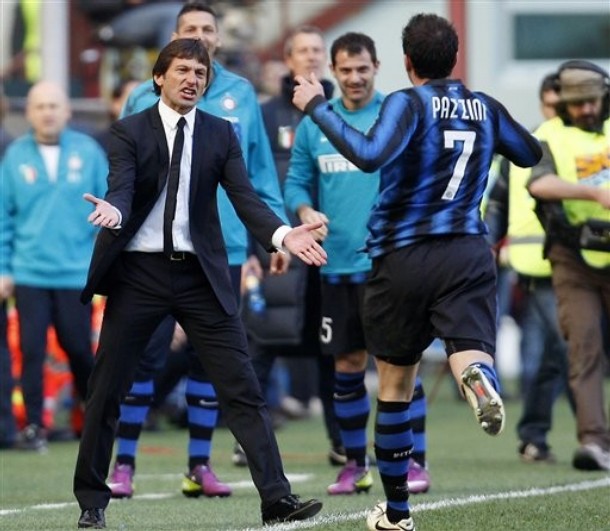 So here we are. -2 From the leaders and all to play for. Here’s where people start – or more likely continue to strongly disagree with me on this subject – the derby isn’t decisive if we draw or win it. If we draw the game, then obviously we are still -2 from Milan with perhaps more momentum. The problem there is that Napoli is right on our ass looking the other way. If we draw we might be in 3rd place but within 3 points of overtaking first. Not a bad place to be – as long as we plan to overtake either Milan or Napoli.

If we win, then we are only ahead by 1 solitary, lonely, vulnerable point… with 6 games left to play. A lot can go wrong and as I have said, we have hard games in April and May just like Milan does.

The problem here is if we lose. If we lose, then we are fucked. 5 points in six games is a lot to ask a team like Milan to drop – I doubt they would have done that last season with a much weaker team than this season. The trouble here, folks, as I say over and over, is that we have messed up the first half of the season. We are now in a position where we have to beat a team that is very close to us in talent level. Had we beaten Chievo, or Lecce or Bologna in the first couple of months then we wouldn’t have to be sitting here tying to figure the league table instead of enjoying ourselves. Had we done things differently it wouldn’t matter how many points Inter gets off of the good teams because we would have had all the ones from the bottom of the table. As it is now, we have to be perfect and no coach wants their team to have to be perfect. It’s too much pressure. Our best hope is that the boys are used to being in this spot - and frankly of all the teams in Serie A, if I were in a fight for the title that required grit and swagger, Inter is the team that best equipped for that fight.

Its 8 finals starting 2 weeks from now.

There isn’t any doubt in my mind who gets this. 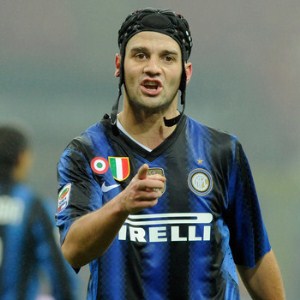 It’s got to be Chivu. As a center back he’s very good. And more importantly, he looked like he was having fun playing in the middle after being sentenced to the hell of the left side. In the Derby, with a little luck, Leo will put him and Ranocchia in the middle bookended by Maicon and Zanetti. If I have to be without the Twin Towers of Samuel and Lucio, then I have confidence in FrogBoy and Chee-voo after yesterday. 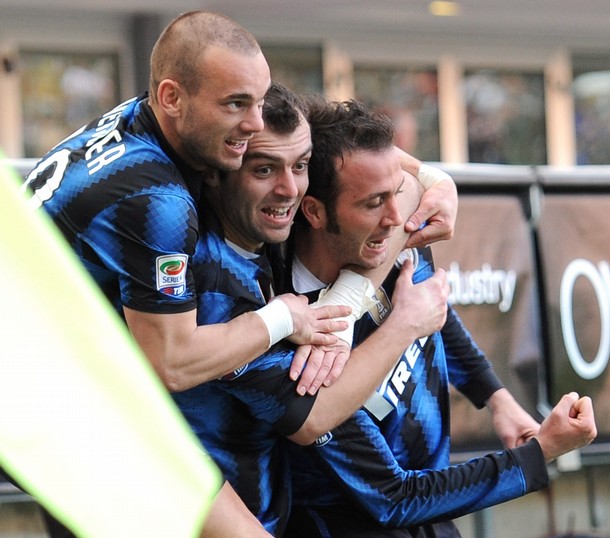