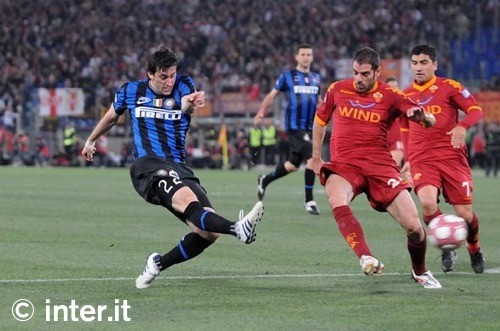 Enter into my wayback machine as we delve into the depths of time. Back... back... back to April 19 when the first half of this 2-match fixture was played out. If you recall, Inter won that game by the smallest of margins (0-1). Still, we have a goal, an away goal, and they do not so we enter this fixture in a slightly better position than Roma, but in no way assured of a place at the final. And given that the Coppa Italia has now become a priority, we really really want to get to that final. A lot.

What: Inter v Roma, Coppa Italia Semifinal, Second Leg
Where: San Siro, Milan
When: Wednesday, May 11, 8:45pm local time (11:45am pacific, 2:45pm eastern)
How to Watch: It is only live on the internets, either ESPN3.com or find a stream (MyP2P, Rojadirecta, Ustream, and ATDHE.me). If you want to see it on tv, it will be on GolTV at 1pm pacific, 4pm eastern.
Liveblog: Kirby is the King. Be here 15 minutes before kickoff for the fun.

Well, nothing has really changed since my last preview a month ago. Totti is still banned (although this is the last match). The big difference is that this is a home game - an actual home game in Milan not a fake one in Rome - and we have really picked up our home record recently. In terms of the Coppa Italia, Inter has had 10 "home" games against Roma and we have won all but the first one in 1937. In terms of Roma in general there are 95 home games and Inter has won well over half of them (55) add that to draws (26) and we see that, historically, Inter usually do pretty well in this situation. So fingers crossed history will speak to the future because we want this Coppa. We want it bad.

Well, just for fun, how about our victory from last year again. Think of it as inspirational.

(I just love it when Mou goes over to watch the playback. I miss him so)

As always, head on over to Chris's Roma board. He will give you the skinny on all things wolfy.

For us, the important things are that, while Totti and Taddei are suspended, Daniele De Rossi and Marco Cassetti are not (their bans are only for the Serie A). Vucinic has been called up, but will have to pass a late fitness test to play. Rosi and Cassetti are in a similar position, but it looks like Rosi may be more likely to recover. Mexes is right out. He is still on crutches and probably too busy looking for a flat near Milan's training grounds anyway. Brighi is also injured for the long run. Dont look for him until next season.

Montella says that Roma want the Coppa Italia, but I am not so sure. Personally, I think they would much prefer to secure a Champions League spot for next season than dick around with this second rate tournament. Still, there is the prospect of that shiny silver star hanging over Roma's head. I have it on good authority that they want it for their jersey, they want it bad (or at least the fans want it for them which is almost the same thing). 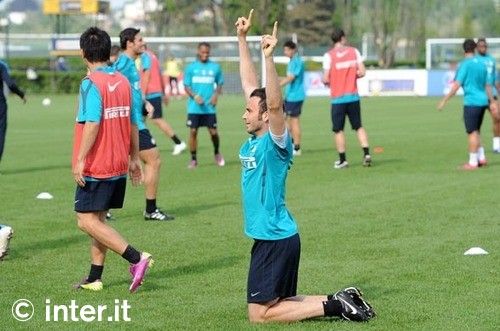 Leo has called up 22 players:

Ranocchia is suspended for yellow card accumulation. Sneijder and Stankovic are still out injured (we all know Cordoba is out for the season, yes?), although Thiago Motta and Nagatomo have recovered (hooray). Which is not exactly the news I was hoping for. I really thought Wes would be back into it by now. Oh well, maybe against Catania - just for show.

Perfect hair, the thighs of a thoroughbred, the heart of a lion. What's not to love?

The man of the hour, though, is Javier Zanetti. If he plays tomorrow (and why wouldn't he) it will be his 1000 competitive match. He joins nine other "millennial" players, including Paolo Maldini from across town (plus a bunch of English players I have never heard of). This is an immense achievement. I am glad he made this milestone at home so the fans can show him just how much we all love him (even if he is Argentinian, Inter and Milan are his home). I hope this gives the team a little extra push because it would be a real shame if Pupi lost his 1000th.

Once again, Leo has confounded us all. There was not a Grand Imperial Poobah of All Things Inter this last weekend - who could have guessed Materazzi to start (I know, you all hate him, but I have a soft spot for him. It was nice to see him on the pitch again). I think it is interesting to note that La Gazzetta dello Sport has not been correct about a Leo starting eleven in like a month. I dont know if that is good, that Leo is keeping things fresh and our opposition on its toes, or it is bad as there isn't any continuity between games. Players need to play with each other to develop rhythm and understanding. Plus, I just find it confusing. We have had two games without either Deki or Wes (Cesena and Fiorentina) with one being a bit more successful than the other. So, do we assume a sort of hybrid between the two? How about:

Or do we take out Tinho and throw on Pandev? What about Mariga? Can we work him in there somewhere? You see? The possibilities are practically endless. I challenge you to read Leo's mind - who do you think he will field. You could win your very own GIPATI certificate. Ask around, they kick ass. 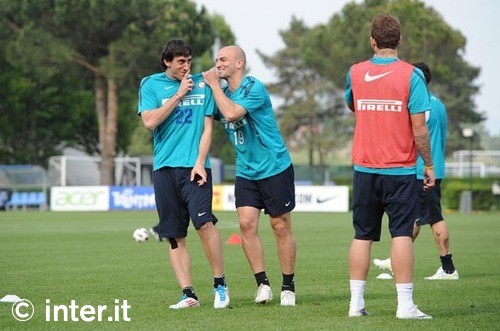 Ok, by now we all know that if we make it through Roma we will be facing Palermo in the finals. This is a good thing. Good because it is nice to have a little variety. I like that Palermo are going through for the same reason it was fun to see Lazio and Samp go at it a couple years ago: who doesn't like Cinderella? Anyway, it will be a moot point if we cant make that single goal lead work for us. Roma will want this final and a chance at a silver star (the first in Serie A). Plus, like us, they would like to salvage something out of this season. Something metal they can put in a case and marvel out. As such, they may be a bit more fierce than they were last weekend. As for me, I dont care how rinky-dink this cup is, how worthless the trophy, I want it. I have gotten accustom to a shirt full of patches and the thought of a naked one has me all sad and wistful. I dont like one little bit, not at all. So I say let's go for it. Lets win this puppy. And first, that means beating Roma.

And here is the behind the scenes from last week's promo: