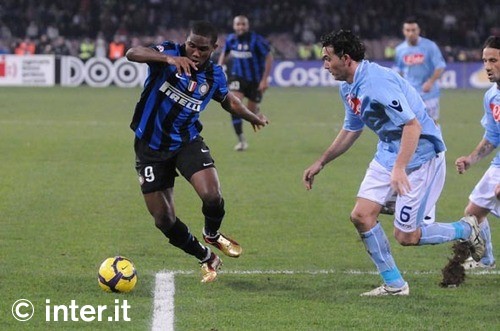 Naples is not a happy place for Inter. At least not recently. And by recently, I mean since October 18, 1997, which is not only the last time Inter won a Serie A match in Naples, but the last time we scored a goal in open play there as well. Luckily, Lecce gave us a bit of breathing room between second and third last week, so a loss here wont change the standings but it would definetly be no fun. Besides, it seems to me, there is no time like the present to turn our woefull San Paolo record around. We have three more games left this season - let's make them good.

What: You all know already, right?
Where: I mean, after all this time do you even read this part?
When: Sunday, 8:45pm local time (11:45am pacific, 2:45pm eastern - what? That is vital info! I wouldn't want anyone to miss the game.)
How to Watch: You all have this figured out by now, right? You dont use my links, do you?
Liveblog: I dont see why not. Same bat time, same bat place. 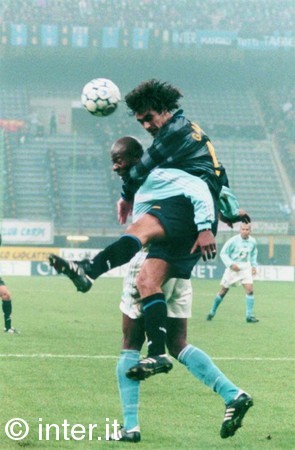 Fabio Galante, the last Inter player to score in open play at the San Paolo.

As I said, Napoli at home is a hard nut to crack. Inter hasn't scored a real goal here since 1997 (that would be Fabio). Granted, this year we actually managed to win a game at the San Paolo, but that was decided by penalties after the match finished 0-0. The game last year finished 0-0 as well, which, as near as I can tell, is simply because Marcelo Zalayeta no longer played for Napoli at that point. In the previous two seasons, it was his goals which decided the game and left Inter empty handed (both years finished 1-0). I would like nothing better to thatn to finally slay this dragon by beating them by two clear goals on their home ground (which is something only Chievo has managed to pull off this season). In reality, though, I would be thrilled to simply not lose.

For those who dont remember, the last attempt to take points home from the San Paolo:

You would think that they would be in hog heaven going into this game: this is the closest they have been to Serie A glory in 30 years. Plus, unless they totally cock it up, they are looking at all that Champions League loot next season. But no. There is some sort of issue around Walter Mazzarri and his continuation with the club next season. He is set to make some sort of announcement after the game which may or may not leave Gli Azzurri looking for a new coach. What's more, the announcement may be dependant on the outcome of the game. So, no pressure or anything. Yikes.

As for players, they have lots and lots of good ones. Young ones. Fast ones.

This one has some spikey hair.

This one has tattoos down there.

My, what a lot of players there are.

Sorry - I just had a Dr. Seuss moment.

They have no players out on injury, but Cavani and Mascara are suspended for the match. And that's about it. The game is sold out. The stadium should be a cauldron. 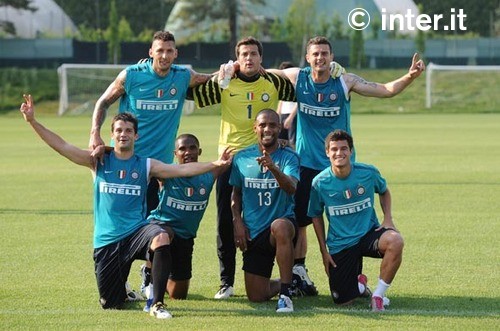 Some of our starting line-up perhaps?

Here's who is going to Naples:

Lucio has a slight ankle sprain while Stankovic and Sneijder are still dealing with their specific injuries. Still. Well, Sneijder is spending the weekend with his mother (or so says his tweet), but I am sure he would rather be in Naples. Right? Right. I wont lie, having these three out does not make me optimistic in front of this Napoli game. Still, this may be a good oportunity for Coutinho - he may be well suited for a game against Napoli (but does that mean Leo will play him? There's the rub). Oh, one more thing, dont look for Samuel to play. Leonardo said in his presser that he is still not ready.

The Many Moods of Maicon.

So where does that leave us line-up wise? Well, perhaps a bit more like Florence than Roma, maybe. La Gazzetta's isn't any help, either. Clearly they have stopped even trying to come up with something plausable (they show Cambiasso starting on the bench!). I will leave it to you, faithful reader. There hasn't been a GIPATI in weeks and weeks, it has turned into something of a challenge.

At least we know one player who will always give 110%.

Here is the place where I typically do a little sum up and a bit of a pep talk. I dont know if I am quite ready for that. Napoli and the San Paolo scare me. Even with our best, we have barely managed a point from this fixture. If we manage to win, it would be a huge accomplishment - a real boost for the fans and players. The problem is, I just dont know if the squad has the legs for it. There will be some players willing to leave it all on the field as they try to book a place in next-year's squad, but for the main core of older players, those secure in thier position or who have already proved themselves, how does Leo get them not to just phone it in? Fact is, even if we lose, we are still second (although, that does put the pressure on at Catania). I guess this will be something of a test for Leonardo as well as the players. I hope he can drag a little something extra out of the boys, because I would really like to put this Napoli hoodoo behind us.

Maybe a little Henry V will put us in the fighting spirit.