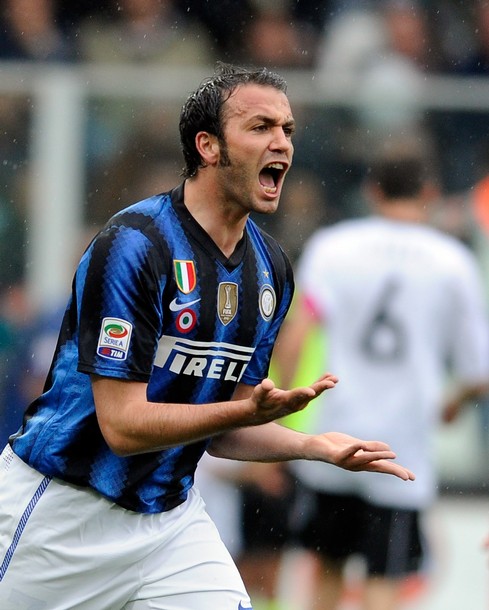 90 minutes of frustrating play, 1 offsides goal against, 1 goal disallowed and another bad injury for a player whittling down our bench... 5 minutes of joy. It's some kind of game...

It’s more accurate to say that he scored in 6 out of 15 games since he scored multiple times in Palermo and Cesena games.

1 goal every 134 minutes averaged out, but this season he's been more streaky than steady. On the other hand, he's much more dependent on service into the box than any other striker we have.

He's lost time in his stint with Inter as Leo has been trying to get Milito back into form. But frankly, since he came at the very end of January, I think he's been a better striker than either Milito or Pandev when either has been employed as such. Personally I think he needs more time on the field as one of a pair rather than a man alone. He needs other people to work off of.

PS He's the only striker we have than can use his head as something other than a place for his glasses.

Of the goals he’s scored this season, he’s got 3 goals that were match winners and 3 goals that pulled us even.

Castellazzi: Seeing as how the goal scored against him was A. offside and B. the result of Lucio leaving his man to attack a cross. Castellazzi played very well even doing that which I know isn’t his strength – leaving his line. 7.0
Maicon: With Sneijder not on the field, we needed someone to move the ball from the midfield to the attack. Maicon didn’t have a great game doing this, but as the game wore on he got better. Improvement should be rewarded. 6.5
Lucio: I thought that Lucio had a worse game than Ranocchia but looking around, I notice that I am virtually alone in this. I can live with that. As I said before, the goal was struck from offside but that’s no excuse for Lucio to have left his man alone like that. 5.5
Frog Boy: I didn’t think that either center back was wonderful, but I am having a hard time seeing how Froggy did so poorly as everyone says he did on Saturday. He was often left alone covering for fullbacks who were making their way back from the attack. Considering his age and lack of experience and the intensity of the game from the relegation battlers, I thought he did a creditable job. 6.0
Nagatomo: Again, looking around Naga is given terrible ratings – but I thought he did a good job. No one was able to attack the goal from his side of the field and he was able to push forward and take pressure off from Maicon being the only link from defense/midfield to attack. Besides, he was tireless running up and down the field and willing to throw his body into the game. 7.0
Zanetti: Zanetti had a decent game in the midfield but I thought that he didn’t give us either the push forward that we are accustomed from nor did I think that he covered for Maicon very well either. All in all a solid job if not spectacular. 6.5
Cambiasso: As with Zanetti, it was a solid job done. And frankly, when Mariga came onto the field, Cambaisso had more of a foil to work with when defending and breaking things up in the midfield. There’s something to be said for creating turnovers out of our defensive third. 6.5
Motta: I didn’t think that Motta had a great game and his substitution could have come 20 minutes earlier at the half. While he helped maintain possession at times, we were running a straight 442 with the wings supposedly the attacking element. Motta in the middle was badly placed in this instance. 5.0
Mariga: Since the outside of the midfield were the positions that were going forward the middle should have been that element that covered the defense. Mariga in the middle with Cambiasso was a much better fit for that job than Motta. Mariga did a lot more in his 30 minutes on the field than Motta in his 60. 6.5
Pandev: Utterly despicable game from Pandev. Half of the problem is that he’s not a wide midfielder – and I give him a lot of credit for being flexible enough to put himself out there at the service of the team. Unfortunately he just isn’t working out. 4.0
Pazzini: Pazzini came in at about 60 and was given 4 balls in service. All were crosses of some kind. His first 2 touches at 70’ and 75’ were just wide and were the closest chances we had at goal the whole game – if one discounts the own goal that was disallowed. The last 2 crosses he got he kicked and headed in. He’s the only forward we have that can attack with a header. 8.5
Eto’o: Other than the cross that he put to Pazzini, Eto’o didn’t have a great game. Other than Pazzini, Lucio had the next best shot at goal. Eto’o as a striker was a non factor. He was, again, probably the best outside midfielder we had… which isn’t great news. 6.0
Milito: Terrible game from Milito. The drive and the desire were there. You could tell that he was clearly distressed at not being able to score. The man was in anguish that he couldn’t get a clean hit on the ball. As much as I admire that emotion, the lack of production is worrying. Really worrying. 4.0

Leo decided to run the straight 442 for this game but we had the same problem with it that we have with the 4231 this season – namely we don’t have any good, natural outside midfielder types and we haven’t since Nicola Berti was gracing our and the national team midfield. Pandev is barely adequate playing outside forward - he’s worse, not better the further you push him away from the other team’s goal.

Milito’s nonproduction is worrisome but not only because it’s some kind of proof of Milito’s yips. It’s worrisome because it means that we aren’t getting the ball up the field for the attackers in a position to take advantage of our hard work on the defensive side. It also might account for the mini-drought that we were experiencing from Eto’o and Pazzini. These guys need to receive the ball closer to the goal. It doesn’t do us any good for those strikers to dribble the ball through 3 people – which won’t happen in the modern game - or to give a lot of time for an entire defense collapse on them.

They need to receive the ball around the penalty area, give themselves a second of space and time to shoot. Take a look at highlights from last season and you’ll see that Milito thrived with service, created himself a second of space to shoot before he was surrounded.

A quick look at the table shows this with 3 games – 9 points left:

Last week we discovered that JuBe was never going to pass us in the table. This week we learn that Udinese and Roma join their ranks – and if Lazio lose today they are in the same boat. This means that we can’t finish any lower than 4th. Champions League is assured. Now what we have to play for is automatic inclusion in the group stage. I could live with coming in 3rd if we use the last couple of games to play the young’ins.

Pazzini stole the show, but I think that Nagatomo had a phenomenal game full of energy and speed. He’s the best option we have at fullback and he’s starting to show over and over again a tireless need to get better and play whistle to whistle. Someone said that the best way to build a team was with three superstars and seven water carriers to do all the heavy lifting in support so that the stars can shine. Nagatomo is proving to be a very good water carrier this season.