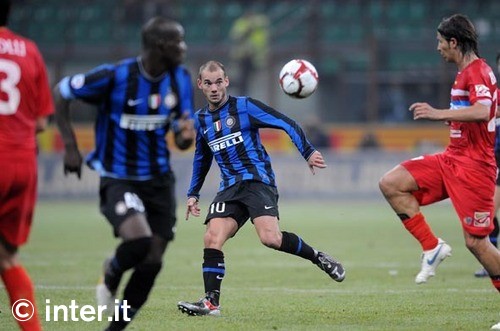 Well, here we are, at the end of another season. This one hasn't ended quite how we all hoped it might last August, but given where we were last Christmas, it isn't nearly as bad as it could be. I say that we take this opportunity to celebrate where we are rather than rue what could have been. Besides, this game is totally perfunctory for both teams. Inter will finish second and Catania comfortably mid table no matter the final score on Sunday so let's just kick back, have a little fun, and enjoy some football.

What: Football, duh
Where: Bello Milano
When: Sunday, May 22, 6pm local time (9am pacific, noon eastern)
How to Watch: This is a streamer. I cant find a single tv station playing it.
Liveblog: Kirby wouldn't miss it for the world, how could you? As always, be here 15 minutes before kickoff.

Well, for a party atmosphere, the fates did well to pick Catania. Inter has never lost a home game against them. Sure, we have only played them 15 times at home, but hey, a record is a record. Last time they came to Milan the game finished 2-1 with goals from Muntari and Sneijder and a penalty conceded by Julio Cesar.

This game sees the return of our old friend Diego Simeone to the San Siro. For those of you who dont remember, he played 85 matches and scored 14 goals for Inter in the late 1990s:

Now he finds his way back as coach for Catania, just like Sinisa Mihajlovic and Walter Zenga before him. Catania come into this game solidly mid table (11th place). They have three wins and a draw in their last five, and have sort of become come-back kings recently. They came back from two down to draw Juventus last month and got a late-game winner against Roma last week. I suspect all of this has them feeling they can take on the world. Hell, they even won the Sicily Derby 4-0 a couple months ago. Palermo is a good team, that is no mean feat! Still, much of that has been in Catania. Away from home, they are not so bright, having only won a single game on the road.

Most of their goals this season have come from either Maxi Lopez or Matias Silvestre. Fortunately, neither of them have been called up as both are injured. Catania still has some talent to call upon though, including Potenza, Ledesma, Schelotto, and Gomez. Simeone will want to make a good impression back at his old stomping grounds, but I cant see Catania putting up all that much of a fight. Of course, they have pride to play for - what team wouldn't like to put one over on Inter at the San Siro - but I sort of think they will be more interested in their summer holidays. 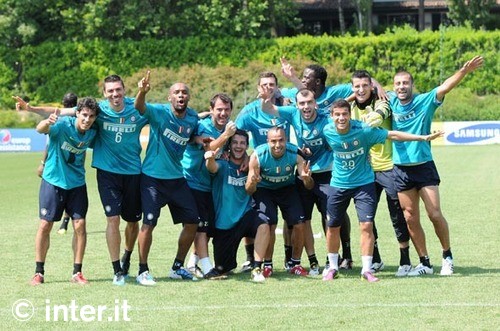 Hopefully these high spirits will turn into lots of goals for us tomorrow.

Lots and lots to talk about here, almost all of it injury related. Leo has called up basically everyone who is fit to go:

Sneijder is still out with his thigh issue, though he has tweeted that he hopes to play the Coppa final. Julio Cesar is having back pains, and while it is hoped that it is nothing serious, who can say (on a side note, he has also been called up by Brazil for the friendly against the Netherlands next month). Cambiasso pulled up with what could be a serious right thigh strain in training today. He is out tomorrow for sure and could miss the Coppa final as well.

Eto'o is set to play his 100th for Inter tomorrow. Leonardo started his presser with words of praise for the striker, calling him one of the best in the world, especially given the variety of positions he excels in and his extraordinary abilities in the defensive phase of the game. Hopefully he will use these last two games to make a serious run at those scoring records. 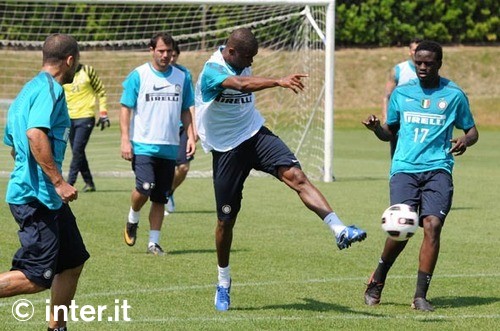 Another good thing is that we have recovered Stankovic and perhaps Samuel. The latter made a brief appearance against Napoli, hopefully he will see a few minutes at home as well. Stankovic may also get a couple minutes just to help him get ready for the Coppa final. Given that our midfielders are dropping like flies, he may make the difference in the final (plus, those 5 goals have sure come in handy recently).

Maicon and his wife are about to have a baby daughter! I think that qualifies as good news. There is some talk of him being sent home early as he is disqualified for the Coppa final. Given this new peice of intel, it seems Maicon has a very good reason to want to spend a bit more time at home. Well, that and he is set to join his national team June 1st for that Brazil Netherlands friendly. Congratulations Maicon family!

Oh, and I dont know whether this is good news or bad news, but Cristian Chivu has officially retired from the Romanian National team. He has cited his recent injuries and operations along with his basically aging body as reasons why he can no longer continue as captain. I had no idea he felt this way - he is only 30 years old - but I guess that means he will be devoting himself full time to Inter next year.

But back to Leonardo and his presser.

Along with taking the time to call out Eto'o for his amazingly wonderful performance this year, he also had a few good words about our baby defender, Faraoni saying simply that he liked the boy. I guess that means look for him to maybe make a splash next season (lord knows we could use a good young defender or two). 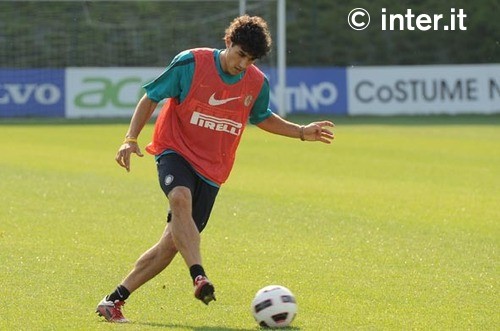 Faraoni, our next big thing in defense?

Leo also took some time to assure the fans that Inter would be playing this game to win (as opposed to the Napoli game where it was clear we didn't want to spoil their party), saying:

We have to approach tomorrow's match in the right frame of mind. We must maintain our focus and the level we're playing at. We're on an upwards curve and we have to keep that up as we head into our last game of the season. Playing well always has positive consequences, and that's why we want to win tomorrow. The game will also be useful to figure out the line-up for next Sunday. Besides, ending our last match of the season at the Meazza on a high can only be good for us.

Which brings us finally to lineups. Here is the truth: I just dont know anymore. Not even a little. It could be that with both Sneijder and Cambiasso out there will be room for Coutinho and Mariga. Or Leo could start Dr. Combi and the head groundskeeper for La Pinetina. What's more, you all dont know either. There hasn't been a GIPATI in weeks and weeks. Considering you all only have two more chances this season to win the coveted title of Grand Imperial Poobah of All Things Inter, I would hope that we would have a record number of guesses.

And speaking of contests... At the beginning of the season many of you entered my Great Big Fabulous Contest where you were asked to predict Inter's final number of points this season, along with how many goals we would score and concede. I will announce the winner after the Catania game and we can all shower accolades (as well as fabulous prizes) upon them.

So, lets go out against Catania and enjoy ourselves. A few goals for Eto'o, maybe even one for Milito, a nice home win, and an upbeat end to our Serie A campaign and I will be a happy camper.

I may not have these in the right order, but here you go: