Coppa Italia Final: Hey Guys? The Season's Not Quite Over Yet

Share All sharing options for: Coppa Italia Final: Hey Guys? The Season's Not Quite Over Yet

So, while everyone else has skipped merrily away on vacation for the summer, Inter and Palermo have one last game. Dont get me wrong, I would so rather it was the Champions League final the squad was getting ready for, but, all things considered, I will take the Coppa as a consolation prize - no matter how booby it may be. Oh, and get this: since this game is on the 150th anniversary of the Italian unification, there is an extra cup to celebrate that as well. Yep, two cups for the price of one. Oh, it is on, it is so on.

What: The Actual Last Game of the Season (sniffle)
Where: The Eternal City
When: Sunday, May 29, 9pm local time (noon pacific, 3pm eastern)
How to Watch: Live on GolTV and ESPN3.com or go pirate (argh me matey) at the usual places.
Liveblog: Damn right we are going to live blog! We are going to liveblog our asses off! And you all are welcome to join us.

Alrighty. So Inter and Palermo have only met twice in the Coppa Italia and it was a mixed bag. Back in 1976, Inter won (1-0) with a Mazzola penalty. The second time was in 1980 and things did not go so well: Inter lost 1-2. Take from it what you will. We will have to look elsewhere for insight, I think.

A quick look at the tree above shows that Inter and Palermo have had a similar road to the final. Both of us had a quarter final go to penalties and both went through by one goal in the semifinals. Both teams have had to claw their way to get to the final so it is pretty clear that both want it. I think President Moratti summed it pretty well in his interview with Sky Sports, saying:

"For [Leonardo] it will certainly be important, considering everything he's had to do and learn since arriving, getting to know how things work – I'm talking about settling in at the club, not learning the job. And it's harder at Inter than in other places because you're given less credit for what you achieve, at least that's the impression you get from the media. He came in the middle of a difficult moment and he has responded well so he deserves to win this trophy. I think it's important to him; it's very important to all of us and it's important to Palermo. I think we should expect a tough game because it's ten times more important to Palermo."

Screw the Champions League final - this weekend is all about the Coppa Italia Final, baby!

Go on over to the Palermo board - there is always something good going on.

I am not going to spend too much time here because, really, they are experts and what the hell do I know. Besides, seems to me, Palermo are a top 6 team (easily) hamstrung by their crazy banana pants president. If they could get some half-way decent management, well... the sky would be the limit. Be that as it may, the players are good and the coach is not chopped liver either. They have the ability to overcome the crazy and anyone who underestimates them will be made to pay.

I mean, look what we are up against: for Palermo, winning this is an historic moment. They have never won a Coppa Italia (we have like 6 of them banging around the closet). Plus, Miccoli has announced that this will be his last game as a Palermo player. Yep, the bloody, bleeding heart of Palermo is about to be ripped out - if that doesn't make for an emotional game, I dont know what will. 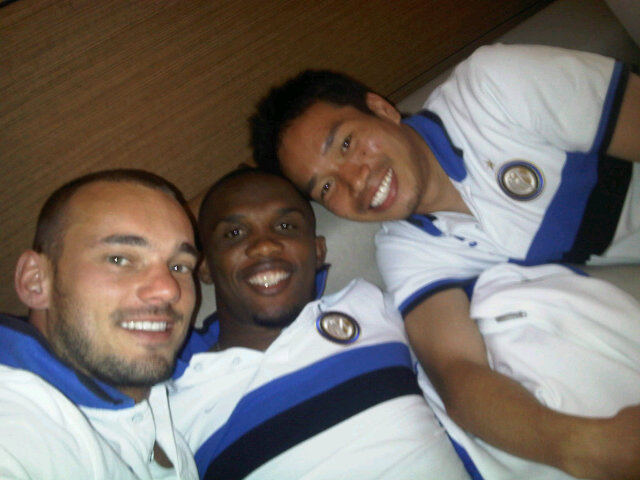 Wes's gloriously happy tweet of him and his friends on the road to Rome.

Leo has called up... well, everyone. Even our baby defender, Marco Davide Faraoni (he will get shirt no. 37). Question is, has Leo brought everyone because he doesn't yet have a plan? or is it a clever attempt to fake out Palermo? The sad part is, it really could be either.

And make no mistake, this is Leo's last stand. We have been in clinch positions under him before this season and the team has crumbled like a veritable crumb-cake. Yummy but disastrous. This will be Leo's final test to show that he has learned how to properly motivate and focus the squad. He needs to get this right or if Moratti doesn't fire him, the fans will eat him alive.

And that brings me to lineups. No one can guess his reasoning with a call-up list to choose from, how can we do it with the whole team? This is our our last chance to dub someone a Grand Imperial Poobah of All Things Inter and your last chance to win it for the season.

Who is in your lineup? One of these guys? Both? Neither?

I suppose we are to assume that we have a complete squad at our disposal... well, not Cambiasso and Maicon, the first injured (I think) while the latter is already in Brazil (he was suspended anyway). On the plus side, Julio Cesar and Samuel seem ready to play, as does Sneijder and Thiago Motta.

So go for it. Who do you think Leonardo will throw at Palermo tomorrow?

In fact, I think that this one is so difficult and so important, being the last game and for a trophy and all, that if anyone get this right, they will be dubbed the GREAT BIG Grand Imperial Poobah of All Things Inter. I know, impressive, isn't it (admit it, you want it).

Any way you look at it, this is going to be an emotional game. Palermo are looking to make club history and to give their beloved captain the sending off he deserves. The stadium is sold out and tensions must already be riding high. Which could give a slight advantage to Inter. This squad has played in numerous "must win" situations. They have felt this pressure and have a bit more experience channeling it. Of course, Palermo has that underdog, making history magic going for them. All around, this is going to be a tough one. Perhaps the worst part is how sad I am going to be for poor Palermo if we beat them (note to Calcio Gods: I did not say "when," there is no hubris here).

Well, there is nothing left for it but to play the game.

And yes, that is David Suazo you see there. Dont worry, he isn't sticking around. He is out of contract at the end of the month.