The Friendly Season is Upon Us: Mark Your Calendars!

Share All sharing options for: The Friendly Season is Upon Us: Mark Your Calendars! 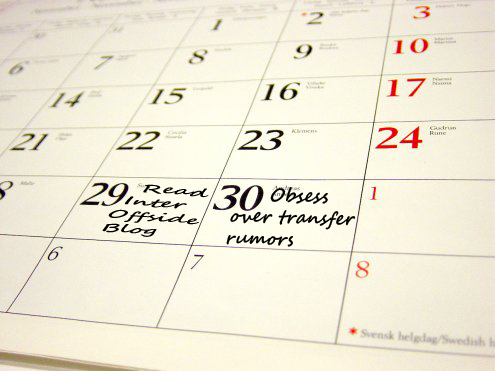 Ok, so we've had a few games already, but they were with lower division/semi professional teams that were just a step up from a training scrimmage. Now we get to the real deal: friendlies against actual professional clubs. I have a full list plus a little previewette of our upcoming game against that Turkish side with all the A's in its name (you know the one).

Here is a list of our upcoming friendlies and cup games:

Random Friendly in Spain
• Inter - Malaga, Sunday, August 14th. I cant find a time anywhere. In fact, other than Inter sites like this one and this, I cant find any info about this one at all. I would pencil this date in.

So there. Now everyone's filled in their date book and no one will miss a game - at least not on mistake. It also means we all now know that our first real friendly is just around the corner. 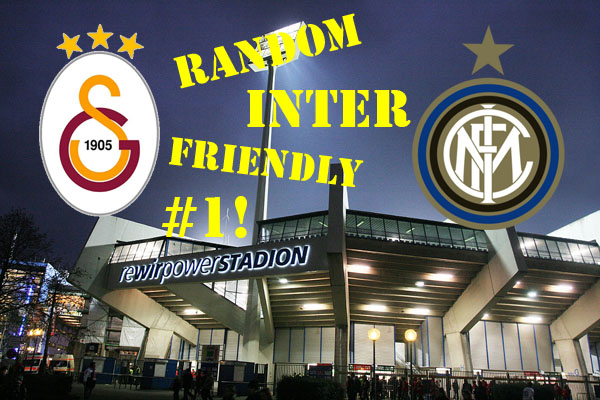 I know, not my best work. But it is 1am here and I'm not feeling very inspired.

Inter hasn't ever played Galatasaray in any real games (you know, like the Champions League or UEFA or something), but way back in 2003 we met in a friendly. It was the Amsterdam Tournament and Inter beat Galatasaray 3-0 with goals from Rebecchi and a brace from Martins (hooray). Unfortunately, Ajax won that tourney (by one measley point) but considering it is their party, I dont mind so much.

I will assume Gasp will take the whole squad to Germany to take on the Turk. Well, except for the Copa America contingent. They are all on a well-deserved vacation and wont be back until after the Supercoppa. So that means more of what we already saw in Pinzolo. The good news is that Thiago Motta, Nagatomo, and Samuel all trained with the team today. Cordoba, Jonathan, Nelson Rivas, and someone named Raffaele Di Gennaro (?) are still injured. It would be nice to have Cordoba and the new guy, Jonathan, available but that's about it. Rivas probably does more for the squad by not playing than he would on the pitch and I assume Di Gennaro is a youth player because I have never heard of him (and I am pretty well informed when it comes to Inter). 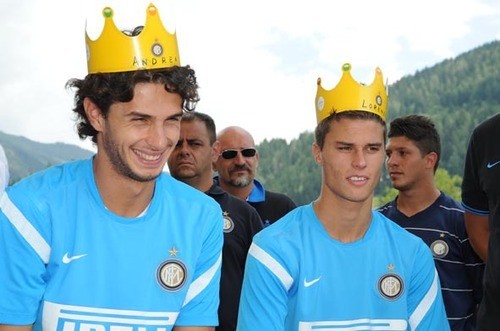 I dont care if SunRiver did scoop me. I am still using this picture because it is freaking fabulous!

I guess Santon and Thiago Motta are still not fully fit.

Ok, so what does that mean in terms of formations... Er...right.

I don't have a flying clue. I suppose Castellazzi, Ranocchia, Chivu, Santon? Nagatomo? I bet Sneijder will play, as will Eto'o and Pazzini. The rest is a mystery to me.

I am totally flummoxed by this 3-4-3 and I sort of wish Gasparini would stop already. I dont know whether it is that I fear change or I just fear Chivu, but a 3-man defense gives me the heebie jeebies. I think back to every time Inter played against a 3-man defense in Serie A and I am pretty sure we usually beat the snot out of them. Then I think, do any clubs in Europe even try such madness? And I break out in a cold sweat.

Right. So no liveblog for this game, but Kirby has assured me he will be up and running for the Manchester City game and the Supercoppa (Hooray). Also, unless you have Sky Italia, you will probably need to find a stream to watch it (MyP2P, Rojadirecta, Ustream, and ATDHE.me). If you find a good one, please post it in the comment thread.

Even though there will be no liveblog, I am sure there will be people here commenting on the game (I know I will be here) so come on over and join the fun. If we are really lucky, MAD will call the game over twitter (@Inter_MAD) for those of us unable to actually watch the game. He is just thoughtful that way.

I am excited because this will be my first chance to see more than a highlight video of this incarnation of Inter and my first game since the Coppa Italia Final. And it sure would be nice if we won.

After reading this post again, I realized that it was brought to you by the letters F and A. But what's a little alliteration between friends.