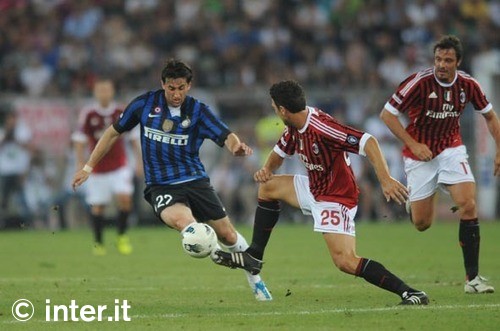 The news for Inter has been at something of a standstill or holding pattern while the club determines whether or not Eto’o is for sale at a discount price. The two sides are at something of an impasse as Inter are reportedly holding out for close to or exactly €30 million and the Russian club Anhzi is rumored to be holding at around €22 million. Will there be a deal? I personally don’t care anymore at this point. I have reconciled with Eto’o leaving but Inter aren’t desperate to sell, despite what you may have heard from a wholly untrustworthy "news" – and I use that term extremely loosely – source our club isn’t down to counting pennies by any stretch of the imagination.

So is there anything else going on that merits mention?

There was the Trofeo Tim yesterday that was something of a mixed bag. The first team that went out against Juventus didn’t seem to interested in playing, but the second team that went out against Milan looked more cohesive. My opinioin? The difference was Cambiasso who took his first step on the field this season for Inter. It’s a bit troubling to me that it’s so late in August for that to happen but I hope that he able to rest his body after all the games he’s played these last few seasons. Oddly I have no worries about Lucio being able to play, even though he had as many minutes these last few seasons as Cambiasso and he was wearing a lot of tape yesterday. We had a first look at Jonathan but I don’t really have a whole lot to say about him. He’s got some speed. He looks like he can pass. I don’t think I have a whole lot of confidence in his defending but it’s a very limited glimpse that we got. I don’t think that anyone in black and blue was playing too intensely.

By the way, if anyone or any website want to make quality judgements based on this silliness, feel free to mock them mercilessly. In case you missed the "tournament":

Montolivo, Casemiro, Poli and Tevez all have the same disease. Their current club wants the moon and stars for their sale. San Paolo who owns Casemiro wants over €20 million for him and that’s just outrageous.

Man City wants over €30 million, perhaps €40 million for him and that’s a lot of money for a player who wants to leave and a club that wants him gone. By January if he’s a sufficiently bigger pain in the ass I am sure they will come down some.

Fiorentina who owns Montolivo have been thinking about €20 million for a player who is in the last year of his contract and has publically stated he’s not signing a new deal – in short, on January 1st he’s available for any team to talk to him about a free transfer in July. Considering the football world only operates in Panic or Deadline mode, look for a deal to be made in December for Montolivo and I don’t think it will be to Inter. The owners of Fiorentina aren’t on great terms with Moratti at the moment so it’s safe to say that there will be no business with the Purple Ones any time soon.

There at one time was a negotiation for Banega and the difference was rumored to be 1 or 2 million Euro, but talks broke down for some reason that wasn’t explained. My personal opinion that has nothing but speculation? I think that the Argie contingent at Inter made it clear they didn’t welcome this tract. It’s just a feeling I have.

The Poli and Lavezzi situation is kind of similar. Neither team wants to get rid of the player. The players haven’t expressed any dissatisfaction with the teams in question. These players aren’t really on the market and their prices will reflect that.

Gago and Forlan seem to be in a similar situation. Both players are apparently available as their current teams are essentially showing them to the door. Both players are willing to leave, reportedly. Both players are able to play at a reasonably high level and are at reasonable prices. Gago is just turned 25 and has had injury problems. Plus, he looks a little small to me, which is different than short. Wes is short, but he’s built like a fireplug. Gago looks as though he hasn’t taken advantage of Real Madrid’s weight room or track.

People are complaining about Forlan’s age, with a reasonable gripe. Inter has been trying to go younger with less outlay, but I don’t mind Forlan coming Inter under the right conditions, what I call the "1 or 2 Plan". He can have a 1 or 2 year contract and 1 or 2 million per year. If he doesn’t like it he can stay in Spain and try for third place. How exciting.

One more market thing, I tried to bring this up the other day and was roundly ignored, which is fine but I would like people to at least consider this in case we do sell Eto’o and panic over who’s going to score goals sets in. I don’t see a need to replace Eto’o if we sell him. If you lose an asset in attack and you can’t replace him probably leading to less goals being scored, then you can fortify with an asset in midfield or defense or a change in formation (kind of like we are doing already, flooding the midfield to clog passing lanes) to keep the score down so that you won’t have to score as much. Plus, it’s cheaper and there will always be new forwards in the next market. The beauty of the position is that everyone wants to play it, everyone wants to own a new one and we even have several youngsters who we could bring up in a year or two.

The other concern that we have been having regarding our team is the formation. So far this preseason we have seen it used several times and once that we haven’t seen it but it worked fine. The worst game we played in this formation was with Man City and there were a lot of caveats that could be taken into consideration with that game.

Personally I don’t think it’s the doom of the club to have 3 in the back, mostly because I think we have 3 good players back there and behind them we have at least two average players – which looking around the league, puts us a ahead of almost everyone. If we can make the midfield and the defense work better together than it did when Leonardo took over last season then we will be fine. Btw, last seasons “collapse of the defense” meant that we finished something like 5th or 6th in goals against, just to keep the perspective.

The midfield is the spot that everyone should worry about. The 2 wide men are going to essentially be repackaged fullbacks unless we use Obi more. Obi is the guy who has really impressed me this pre-season and really deserves more time on the field. The middle two will be some combination of Cambiasso, Motta, Stankovic (ugh), Coutinho, Alvarez and maybe if we are really, really lucky more Crisetig.

Here’s my problem with the midfield. With the exception of Cambiasso, who is creeping towards too old, we are too old, too young or too gimpy. We need midfielders who are in their prime and if they are actually placed in positions that are their natural ones (Deki, I am looking at you) that would be a swell bonus too...

For the purposes of this formation we can consider Sneijder a forward, since he’s going to be the man in between the forwards in a 343. I can explain our forward position as I see it thusly: without Eto’o, unless Milito goes back to 2009-2010 Milito we are going to be average up front, despite Wes making magic (hopefully). If Milito regains his form, we will be very okay. If Eto’o comes back and is Eto’o of last season, we are good. If Eto’o of the Russian stomach-ache arrives then we are in trouble. 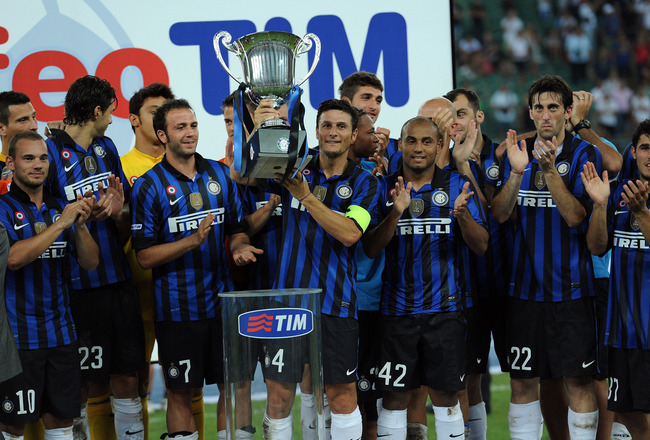 Doesn't Milito look like Alice Cooper in this picture?