Share All sharing options for: The Supercoppa Italiana, Derby Style 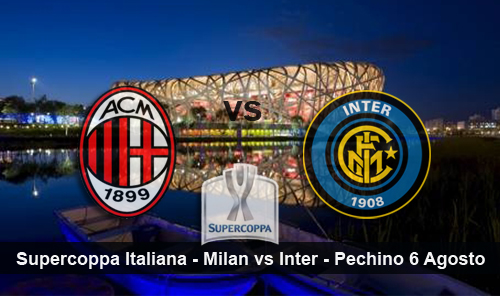 For some reason, it feels way too early to be thinking about next season. Maybe it is because we have players still on vacation or that the summer market still has a month to go. I dont know. I just feel unprepared and slightly panicky about everything starting up already - sort of like when you know you only have two days to finish a project you were supposed to be working on all month. In a word, Yikes. Usually the supper cup is a little piece of fluff to begin the season, an amuse bouche if you will before digging into the 38 course meal to come. This one, though, is a grudge match - as all derbies are - and will be played accordingly.

What: Italian Super Cup, Milan v Inter
Where: Beijing, China; that nesty stadium
When: Saturday, August 6, 8 pm local time (5am pacific, 8am eastern, or find your time here)
How to Watch: Live on Rai Uno and ESPN UK but other than that, I think we may need to find a stream (MyP2P, Rojadirecta, Ustream, and ATDHE.me).

I think I finally have the times correct. I was wrong with my last post (I think - my automated calendar still has the other time). If anyone has something different, please post it.

I dont think anyone is going to China with the idea of "summer friendly" in their minds. Nope, it doesn't matter if this is essentially a meaningless game for a stupid trophy (you dont even get a patch for your shirt!), both teams will look to this game to set the pace for the year to come. Probably more than any other participant, this game puts Gasperini on the hot seat. It could be that his whole Inter career hinges on winning this game. If he loses, the press will turn against him like a school of pirannas. Whatever pressure he is under will increase exponentially and Moratti will make that little pursed-lip unhappy face he gets when thinking about sacking a coach. Branca will begin compiling a list and discreetly putting out feelers. Again. If Gasp wins, he will become the new darling over night. The players will be happy, the fans will be happy, and what's most important, his president will be happy. I cant help but think that there is a whole lot more than a trophy riding on this game. If Inter wins, Gasperini just may make it past Christmas as Inter's coach. And he has to do it after only working with the team on a new formation for a month and without four first-team members. 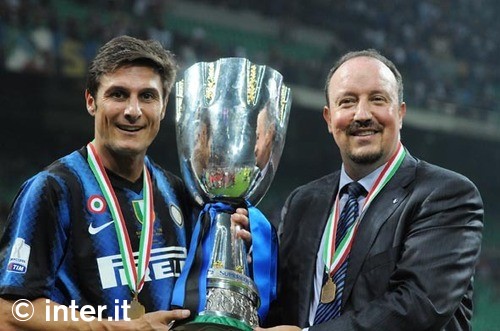 This cup didn't save Benitez's job, can it ensure Gasp's?

Inter has participated in the supercoppa eight times. Usually we play against Roma, but Lazio, Juve, and Sampdoria have guest appearances as well. Usually Inter win this game (five wins, three losses). Take this as you will, but the last time Inter played for this cup in China, we lost. Of course, we went on to have our most successful season ever so like I said - it could go either way.

Mexes has an owie or something, Flamini is super old (and may not play for Milan any more), and I have no idea why they left El Shaarawy at home. Strangely, they brought Taiwo along - I guess for the bonding experience because he is suspended for this game (dont ask, something about carrying over an infraction from the French leagues or something). Anyway, the important thing to notice here is that they have just about a full squad available. All of them. Everyone. Yep.

And as I have no desire to submerge myself in any more Milanness, I suggest you go check out Gianfranco's preview if you want more red and black. 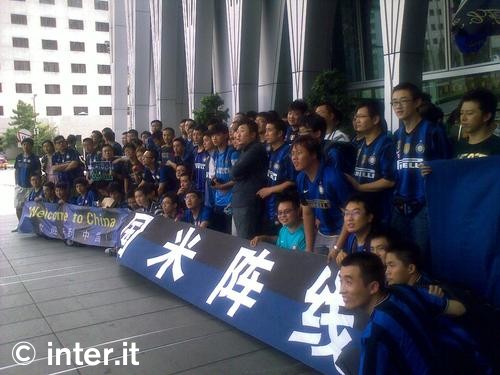 Buy lots of jerseys, Chinese Inter fans. Make this trip worth it for the club.

Cambiasso, Milito, Lucio, and Maicon are still on vaction. Julio Cesar and Zanetti were supposed to be resting, but the injuries to Viviano and Nagatomo meant they had to come back early. Coutinho is tearing it up with the Brazil U21 team. Oh, and while Zanetti and JC have been called up, neither have trained with the team or Gasperini really (JC got a day or two, but that hardly counts). We all knew that somehow Zanetti would be at this game. I am just sad that Nagatomo had to the Universe's fall guy to get him there. Next time, dont tempt fate, give him a ticket right away.

How this translates into a lineup is anyone's guess. Gasp did say that Inter we saw against Manchester City is not the one we would say in Beijing. Ok. Good start. But what that actually means... How about:

Or not. What do I know? Gasperini is still a mystery to me. Plus, I dont understand the obsession with a 3-man defense. Not even a little. In the midfield, I suppose Santon could play, as could Faraoni. Stankovic could come instead of Thiago Motta, or both could play, pushing Sneijder over to the edge or even into the top three. I just cant say. I have no idea how to put Inter's round peg into Gasperini's square hole. None. 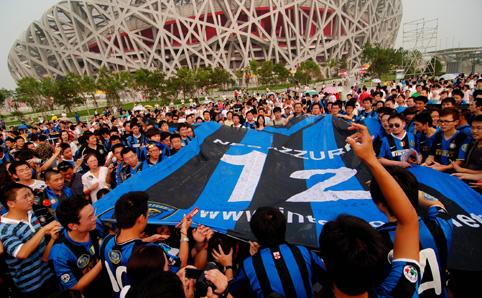 Seriously, if like a third of the people in China bought a shirt, this financial fair play thing would be in the bag!

I am trying to remain upbeat and positive about this match. It isn't that I dont think we can take them (I do) I just dont know if we can take them yet. We are missing some key players and the ones we have really haven't had all that much time to work together. Many of them are making their first team debut while a couple more are completely new to Italian football. Beating the team that took it all last season, who are largely the same from last season, and who have been working with the same coach for over a year now, that may be a bit too much to ask.

As I said, though, it isn't all gloom and doom if we lose. Inter lost against Lazio in China and went on to do the triple. I think we would all gladly sign on for that again. Of course, the world had a lot more confidence in Mourinho as a coach than poor Gasperini. I wonder if Gasperini will be allowed to lose or if the red frowny faces are already piling up next to his name in Moratti's little black book of coaches. Remember as well, Benitez won his super cup and look at how that turned out (not so great, IMO). I think the only way to go into this is with no expectations other than hoping for a good performance with no more injures. In fact, I have to say that at this point, escaping unscathed and generally healthy from this encounter is just about my top priority for the match. Everything else is just gravy. And dont forget, we get to do this all over again in two weeks for the most odious of preseason games: the Trofeo Tim.

I do wonder if Allegri has them practicing penalties, though. You know, just in case.

It was the best I could find:

Dont forget, you can follow this blog on twitter by following me @InterOffside and MAD @Inter_MAD. Never miss an Internazionale thing!