Palermo v Inter: It is About Freaking Time

Share All sharing options for: Palermo v Inter: It is About Freaking Time 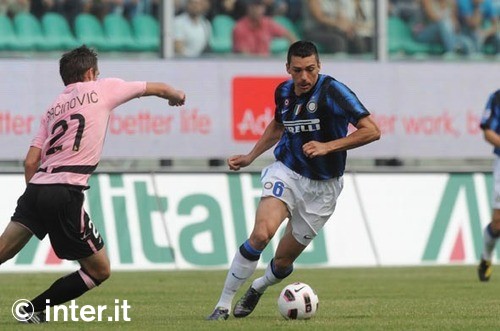 I am so ready for this season to start that I can practically taste it. Of course, there is a fair amount of nervous trepidation as well: new coach, tons of new players, crazy new formation... It could be spectacular or go horribly horribly wrong. I feel like the start to this season has been glacially slow and, given Inter's busy fixture schedule, the team had better be ready to do 0 to 60 in three seconds flat. This season's margin of error is going to be minuscule so we really need to get off the block cleanly and that means three points in Palermo.

What: Day 1, Palermo v Inter
Where: Stadio Renzo Barbera in lovely Palermo
When: Sunday, September 11, 8:45pm local time (11:45am pacific, 2:45pm eastern)
How to Watch: Live on Fox Soccer Channel (which I now have in HD!), or find a channel here. If this doesn’t work, find a stream: (Rojadirecta, Ustream, and ATDHE.me)
Liveblog: You know it! If Kirby isn’t up to it, I will run it myself! Be here 15 minutes before kickoff to join the fun!

Wow, so it just dawned on me that our last game of the season last year was Palermo in the Coppa Italia (which we won) and now, thanks to that stupid strike, our first game of this season is... Palermo! It has a nice symmetry, dontcha think? And before any of you go there, no, I dont count that hopped up friendly in Beijing as a real game. Moving on.

Anyway, as I was saying... Palermo. They are tough to beat at the Renzo Barbara. Of the 24 times Inter has traveled to Palermo, we have only won nine times. Still, we have only lost four games, so more often than not, Inter walked away with at least a point. The scoring record is also in our favor, just, with 36 goals for us and 24 for them.

Last season Inter won this tie, but just barely. The game ended 1-2, with both our goals coming from Eto'o. As I recall, there were also some issues with the officiating. A quick look at the highlights show that Sirigu is an excellent goal keeper. It also shows that the main players involved in all Inter's action were Deki, Eto'o, Maicon, and Pandev... Only one of which will be available on Sunday. Gulp.

Let me just start by saying that Palermo this season is practically a whole new team. I only recognize like six players on their roster. Interestingly, they did manage to pick up Matias Aguirregaray. Inter had an agreement with him a couple seasons ago but had to break it when the FIGC put that cap on non-EU players. All our slots were full so Inter couldn't take him. Other interesting things on thier squad page: Armin Bacinovic looks just like Barry Manilow and Josip Ilicic has an enormous Frankenstein-esque forehead.

So Palermo, like Inter, are practically a whole new team this season: they have a new coach (and are already on their second!), sold big-name talent, and have many new, young players. One thing that Palermo does have over Inter is that the squad has all been training together since early July and they have already played some real games. In the end, Thun knocked them out on away goals (which is why Nocerino can play in the CL but Forlan cant) so it wasn't the best outcome but at least they got to play.

While the turnover has been large, Palermo still have some quality players. Miccoli can seemingly pull goals out of thin air, while Ilicic is as tricky as they come. La Gazzetta thinks Mr. Mangia may throw a little something like this at us:

And aside from the fact that I dont know who half of those guys are or how they play, it looks pretty good to me. 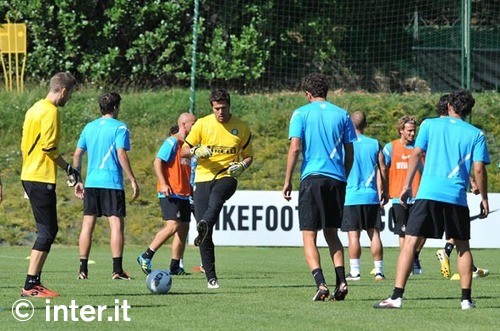 Well, the season hasn't even officially begun and we already have injured players. Caldirola, Castellazzi, Chivu, Cordoba, Maicon, Thiago Motta, and Andrea Poli are all on the injured list. Luckily, Stankovic has recovered from the head knock he took while playing for Serbia and has been cleared for play. Hooray. Aside from that, everyone else is available. The only question is, where to put them all (doesn't it feel like we have an enormous squad this season?).

So, La Gazzetta thinks Gasp will field his beloved 3-4-3:

As you can see above, La Gazzetta thinks Milito will start over Pazzini, and given that Pazzini was recently on International duty while Milito was not, that makes sense. I guess. That is also why no Ranocchia or Sneijder. Both played 180 international minutes so perhaps a bit of rotation may be in order. We do have another game coming up on Wednesday (CL against the Turkish team) so I can see how starting this game from the bench might be good - especially as a way to stave off injuries as fitness levels build.

I am very interested to see how Forlan and Zarate get on. Both have a large amount of talent but have drawbacks as well. Forlan has that new to Italian football and aging thing going on while Zarate is not exactly known for being a team player. Jonathan, well, he is pretty much an unknown at this time. He played a bit of one friendly, which I watched on a crappy stream while trying to corral a puppy. Not the best for player evaluation. I dont remember being impressed, though.

Sparkling and decisive... Wouldn't that be handy in Palermo?

I am also still baffled by the formation. I look and nod when I see the players (they are all good, talented individuals), but I cant help but think they are being used inefficiently. Hopefully, this game will convince me that Gasperini is not totally talking out of his rear. I want to believe, I really do. But then I wonder what the point is of spending all this cash on midfielders if Gasp is only going to play defenders and strikers (that lineup has only 2 midfielders - count 'em) and then I start to think maybe he is a little nutso, or maybe a lot, and all that good will and belief goes out the window.

Ok. Deep breath. We can do this. It is a new season with a blank slate, there is no reason to assume the worst, right? Right. All those seemingly disorganized messes disguised as pre-season friendlies served a purpose - everyone has learned from their mistakes and will come out on Sunday organized, present, and ready to win, right? Right.

Then let's do this!