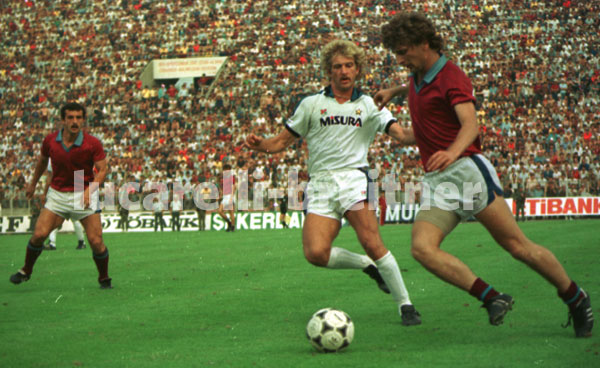 And I sincerely hope we all learned from our mistakes on Sunday. This is a new game, though, in a new tournament, so Inter has an opportunity to put the horror of the past behind us and start out right in the Champions League. On paper, this is our easiest tie. It is the perfect warm up to what I hope is a moderately successful Champions League campaign. Plus, this is our first home game of the season. Let's make it count.

What: Inter v Trabzonspor, CL Group B Matchday 1
Where: San Siro, Milan.
When: Wednesday, Sept 13, 8:45pm local time (11:45am pacific, 2:45 eastern)
How to Watch: Live on DirecTV Soccer or PPV streaming on FoxSoccer.tv, or you can find a stream (Rojadirecta, Ustream, and ATDHE.me).
Liveblog: Ummm. Dunno... Kirby?

Trabzonspor wasn't even supposed to have been in the Champions League. Last season, they finished second behind Fenerbahce so were already in a CL playoff spot. Then there were allegations of max fixing in the Turkish Super League (which is still being looked into) and Fenerbahce were implicated. UEFA pressured the Turkish FA and Fenerbahce was banned from the CL this season which meant that runner up Trabzonspor got thier spot. Which is strange because they had already been knocked out by Benfica (1-3 aggregate score) in the third qualifying round. Anyway, they are here now and looking for redemption.

Interestingly, this is not the first time Inter and Trabzonspor have met. Way back in 1983 during the first round of the UEFA Cup, Inter and Trabzonspor squared off for the first (and only) time. The first round went to the Turks, which finished 1-0 , but Inter went through after winning the return at the Meazza 2-0 (Altobelli and Collovati). I know, it was a long time ago, but there is a connecting thread: Trabzonspor's coach Şenol Güneş is an ex player for the team and was in goal for both games. Crazy, isn't it. Anyway, I guess that home win was a big deal for Trab* as it is the only game I can find a photo for (see above).

* I have no idea what their nickname is but I am tired of typing all those letters all the time. Plus, my pinky is getting tired hunting for the Z all the time. 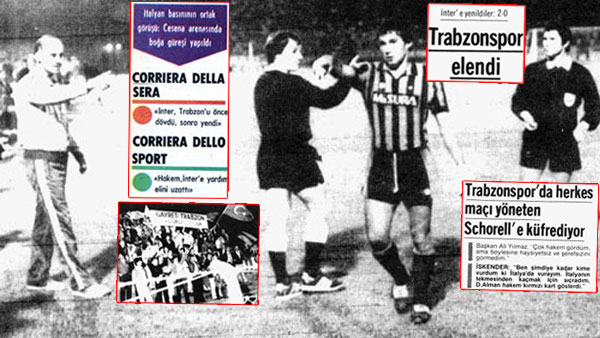 This is the only photographic evidence I could find of the 1983 Inter Trab match.

As I said, they were last year's second place team in Turkey. They have only played one league game this season (draw, 1-1) so there isn't much to look at there. They have another goal in the CL qualifying round (Henrique) against Benfica but then had a player sent off. That game ended 1-1. Since they had failed to score in the first leg (away), they got dumped. Similarly, in the one Europa League game they played against Athletic Bilbao, they had a player sent off, this time early in the first half, and failed to score.

They had no problem scoring goals in the Turkish league last year though. Last year, their big scorer was Burak Yilmaz (19 goals), with Umut Bulut (13) and Coelho Jaja (12) right behind. Yilmaz is still with the team (he was the guy sent off against Athletic), the other two seem to have moved on. There, we have just exhausted everything I have been able to find out about Trab and what sort of team they are. 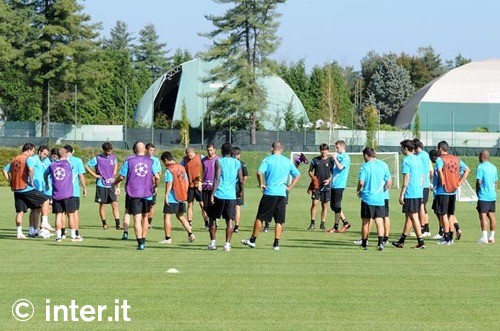 Thanks to Inter's little oppsie, Gasp has only called up 20 players:

Caldirola, Chivu, Cordoba, Maicon, Thiago Motta and Poli are all still injured (wow, it has been tough on players with a "C" name). Forlan is not allowed to play in the Group stages and Castaignos was left off the list.

The big news, though, is all about Gasperini and what formation he will use. For his part, GP has only said that what (and who) he plays will depend "on the situation and on our opponents." He went on to say that they would analyze their past mistakes so as not to repeat then and that they were "working hard to improve" and looking "to play a different game." How that will translate into formations is anyone's guess.

When pressed on what were the biggest mistakes the team made against Palermo, he replied:

"The worst thing was exposing ourselves so much and creating an imbalance, allowing them to hit is on the break: we have to work on that. But there were positives too, let's not forget about those. Still, after a game like that there are obviously a few things that need to be corrected. We were undone and unbalanced, as I said, but we can fix that, and we'll do so regardless of the formation, which does affect things but is not really such a determining factor - everyone has to help the defence. And I've always said that with me at the helm Inter would have to be flexible in the way they play. However, it's simplistic to put everything down to a problem of formation; what we need is to find the right balance. And the players have always given me their full support in that."

Which actually makes me feel a little better about things. The best possible result from Palermo's loss is that we learn from it and become stronger.

Ok, I meant to write more (and post this sooner) but a trip to the emergency room changed all that. Dont worry, the S.O. is ok, he just has a kidney stone (ouch!) and needs intravenous pain medication (whoopie). But it took up a large part of my day so I have to cut this short. You understand, I’m sure.