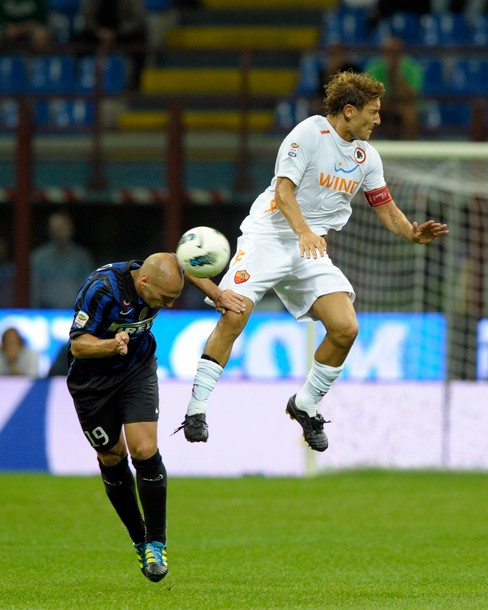 The games are coming fast and furious here so in the interest of time this’ll just be a quick little game review so that we can focus on the next one.

Obi – It’s great for me to see Obi out there patrolling the sidelines and making excellent runs forward. He needs a lot of work on his shooting but everything else was great.

Ranocchia – I thought Ranocchia was very good as well. He was out there against a faster player than he was and he was a technician out there. When his man tried to take him inside, he was stoned. When his man tried to muscle him off the ball he threw him to the ground. All his man had was to take the ball to the outside… which is exactly what you want the attacker to do in that spot. People will complain that Borini got off a couple of crosses, which is going to happen. Zanetti, Bergomi, Maldini, Facchetti all had people take crosses while they were defending them. The fans want perfection; it’s not going to happen. The youngster did very good.

Lucio – Lucio in the back was excellent in covering the few crosses that came from Ranocchia’s side, plus Lucio made sure that there was almost no action for Cesar to have to worry about from that side. The only shot that came from that side was well off a dangerous angle and not a problem for Mr. Yip Cesar. I don’t even have a problem with him kicking that goalkeeper. He was going for the ball and the keeper came out and led with his head at Lucio’s feet. Going for a head ball is different, that’s supposed to be a guy jumping straight up, head to head. Head against arms or feet is a no win situation for the head. Lucio didn’t take any prisoners and that mindset is sorely needed around here.

Zarate – Milito and Forlan had a real problem taking shots yesterday. Not scoring… taking shots. Zarate comes in, takes on a defender, makes space for himself and he took a damn shot. I don’t have any problem with Gasp taking off the forwards. If they aren’t going to score… they need to sit for people who will be effective. And yes, those effective people might not be forwards.

Wesley – Not his best game by any stretch of the situation but he also had probably the most meaningful shot on goal that there was yesterday by either team. Zarate made a nice cross and if the defender isn’t there to act on reflex it’s a goal.

Nagatomo/Jonathan – Both players were very solid and did their job. I have no problem with either player’s performance. Jonathon looks like he’s getting more and more confident with each game. All he really needs to figure out here is where he’s going with the ball when he goes forward. It looks like he’s a little lacking for ideas once he gets to the top of the opponents area. Once he figures out that it’s okay to take a couple shots himself, he’ll hopefully be fine.

On a related note, I thought that using Nagatomo, Jonathan and Obi the way Gasp did was very good. Those guys run so much out there that keeping them fresh was a nice move.

Not Giving Up the Last Minute Goal to Lose the Game Like What Happened 3 Times in a Row So Far This Season – I have been reading all the people who are upset that we put in Muntari at the end of this game and then I watched the last 10 minutes or so that he was in again. I saw him take the ball away from Roma twice in the midfield, once sparking a counter that led to a shot. He also made a nice run into the area but he wasn’t able to connect on the pass. Do you want to know what else I noticed? I noticed that Roma hardly managed a shot in the last 10 minutes and we got a point.

Yeah, I am still not getting the panic here.

Javier Zanetti – I understand why he’s on the field as a center midfielder. Alvarez isn’t ready to play as a starter. Poli isn’t healthy. Mariga is gone. If Gasp put Muntari in then the collective apoplexy of the fans having an actual midfielder in their prime playing in an actual midfielder’s role would be biblical. But it’s not a position that he’s really comfortable with paying, I don’t think. And as a result Inter didn’t get a whole lot from the position.

Milito/Forlan – It’s like this, the forwards need to produce. We had chances against Palermo and didn’t put them away. We had chances against Trabzonspor and we didn’t put them away. We had many chances against Roma – the best of which came from Wes (twice) and Zarate. But there was nothing from these two. The thing that really bakes my biscuits (In my house “biscuits” is a euphemism for butt cheeks which makes the whole Busquets thing even funnier to me) is that Forlan had the nerve to look irked at the end of this. Dude, you have 1 goal in 2 games and 4 million per. You have nothing to be irked about. I am irked about this.

Walter Samuel – I didn’t think that Walter had a very good game and if there is a player that I think is poorly suited for 3 in the back it’s him. It’s a bit of a liability to have Walter pass too much or move in space too much. He’s not that kind of player. Chivu and Caldirola who are better suited for this style are injured just now. Should we abandon the formation because they are injured and Samuel isn’t his best in it? If we are going to stick with it, then no, I don’t think that we should. When the time comes, we just put in the correct player in and the rest of the team would have that time in to get better in the style.

I said this before; I don’t think it’s a mistake to get younger and better technical players. The style that Gasp plays is nice for that type of player.

Julio Cesar – Gasp’s style makes the 3 in the back have to touch the ball more, which means that Cesar needs to be more aware and more of an option for those guys if they need to go backward. This summer I would have said that one of Cesar’s strengths was his ability to use his feet. He didn’t look too comfortable with them yesterday. Thank goodness he wasn’t called on to do too much yesterday. One save, I think is all he really had, right?

Cambiasso – The term is “eating Totti’s lunch”. Then again, I would expect just about anyone to be able to keep up with Totti physically… he’s not going to beat anyone with speed or strength anymore, but Totti can be tricky with the ball at his feet and Cuchu did a good job on him defensively. Unfortunately that’s all Cuchu did. There was no supporting the attack and Wes, there wasn’t a whole lot of anything other than sticking close to Totti.

Branca – We saw Gago play yesterday and he played decently for his second showing in Serie A. We could have used a midfielder like that here in Interland. Considering his price it was a mistake I think that’s going to be compounded by the guy we decide to pick up to bolster, for the millionth time, the midfield. We are either too old or not experienced enough in a high pressure league/team in that area and it’s going to cause problems until it gets solved, for the second season in a row. The midfield affects the attack, it affects the defense.