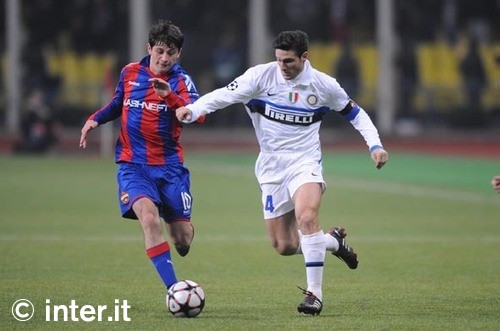 So we finally won a game. Great. Unfortunately, it doesn't amount to a hill of beans for the Champions League. After our poor start against Trabzonspor, the club will definitely be looking for a win in Moscow. Given our injury crises and general lack of identity these last couple months it will be a tall order but not one out of reach, I hope. Fingers crossed.

What: CSKA Moscow v Inter, Champions League Group B Gameday 2
Where: Luzhniki Stadium, Moscow
When: Tuesday, September 27, 6pm local time (9am pacific, noon eastern). Due to time zones, this one is early.
How to Watch: Of course, we got bumped by the big boys so unless you have one of these channels, you will have to find a stream (Rojadirecta, Ustream, and ATDHE.net).

Inter and CSKA Moscow have met four times before in the Champions League. First, in 2007, then again in that fateful year, 2010. Inter has won all four of those past games. Which means there is some history to uphold. Last time we went to Moscow, Inter won 0-1 after goal from Wesley Sneijder in the 6th minute.

Russia is already half-way through their season so CSKA Moscow is probably at the peak of thier fitness. They are second in the league with 14 wins, 8 draws, and only 3 losses. They won thier last league game 3-1 and drew Lille 2-2 (away). Overall, CSKA has scored 46 goals in 25 games and allowed only 23. So basically, they are in a much better position that Inter right now.

A quick look at ESPN shows that against Lille they played a tight 4-1-2-1-2. Interestingly, they had miserable stats (only 37% possession, 8 shots, 2 on goal) but managed to rally in the second half and come back from a 2-0 deficit. These guys want it and will play to the bitter end. Usually, it is Inter who is exploiting the other guy's tired legs and getting ours back in the second half. I dont know if that strategy will pay off here, though. 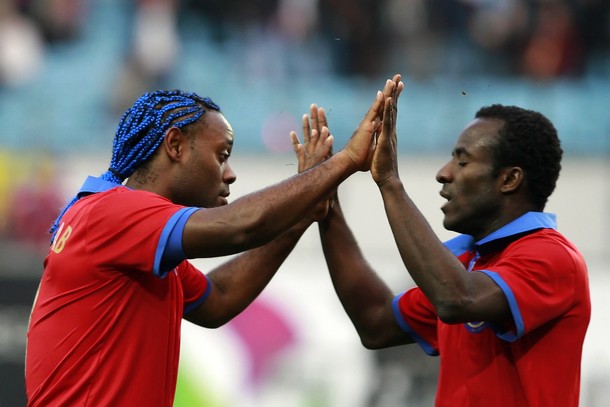 eydou Doumbia and Vagner Love, two guys who know how to rain on Inter's parade.

Moscow have goal scorers all over the pitch but their big guns are Seydou Doumbia (15!), Keisuke Honda (7), Sergei Ignashevich (5) and our old friend Vagner Love (5). Honda and their first string keeper are injured, so there is a bit of a respite. Still, Doumbia is Dangerous (note the capital D). He got is their top scorer and got both goals against Lille on Matchday 1. We are really going to have to step our defense.

At least the weather wont be entirely against us. It is chilly in Moscow but not glacial. Tuesday is forcast to be about 46 °F with a 70% chance of rain. I know from watching the Sounders that rain and an artifical surface make for some unpredictable balls. They tend to skim the surface oddly when you play them on the ground while being totally dead on a bounce. CSKA are used to these conditions. I hope someone has mentioned them to our boys as well. 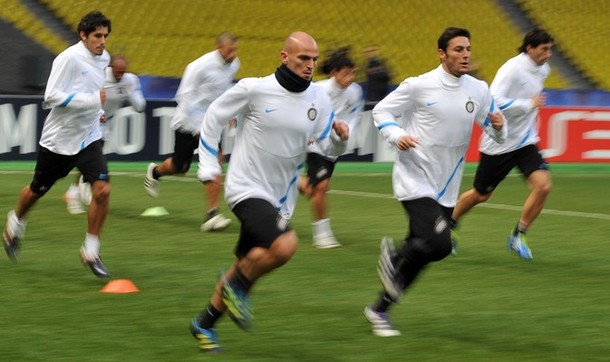 Cambiasso is going to have be in tip-top form to pull this off.

The new guy (it is still difficult to type his name) has brought along just about everyone who can walk:

As you can see, we are running desperately low on midfielders. So much so that Zanetti is listed as one and we are bringing Andrea Romanò, an 18-year-old kid from the Primavera team. Cordoba, Maicon, Stankovic, Poli, and Sneijder are injured. Forlan, Muntari, and Castaignos are not eligible for the Champions League. Oh, and Ranocchia injured himself in training today so he is out as well. Basically, what began as an uphill battle has become a nearly vertical. I hope everyone remembered their crampons.

Ranieri has gone back to basics with the team and it is thought he will go for a straight 4-4-2:

At least, that's what he tried today and, when you dont have a lot of time, it seem a prudent choice. If there is on formation every single player should know exactly how to play it is a 4-4-2. Even so, CR was clear in his pregame presser that he only works out the formation the night before and he wasn't sure about Milito and Pazzini starting together. 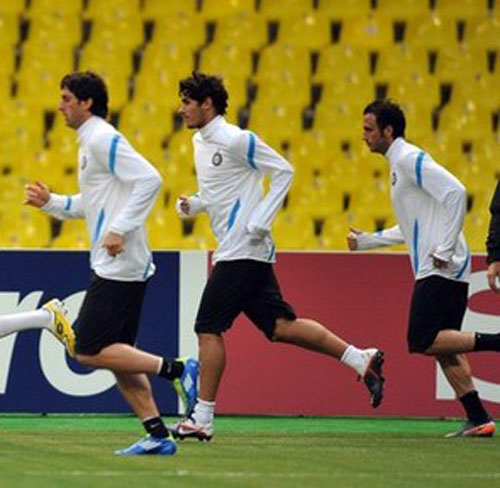 Pazzini & Milito: mutually exclusive or our best hope, what do you think?

I sort of feel like we are sending our 300 against the Persians. But, and its a big but, if our defense can play like they used to, we may just have a shot. One thing is for certain, pass completion is a must. Once we have possession we have to keep it and not fart it away like we did against Bologna. Sure, we beat them, but CSKA is no Bologna. Dont look for Doumbia to miss those one-on-ones or Love to habitually send it over the crossbar. This is going to take tip-top concentration and effort.

I know it seems unlikely, but we have to go forward as if it were probable. We can totally win this thing, I know it. Oh, and happy 19th birthday Luc Castaignos. Maybe Mister R will let you play this weekend!