And much to my chagrin, Inter's has actually gone up this season.

Once again, La Gazzetta dello Sport has published everyone's wages for the upcoming season. Inter, as was expected, are among the top four: Milan (160 mil), Inter (145 mil), Juve (100 mil) Roma (76.5 mil). On the other side, little Novara's total bill (9.8 mil) could just about be paid by Ibra's salary alone (9 mil). The biggest bang for their buck? Napoli. They have a top team that costs only 41.2 million. Very economical.

You can check out the lists for all the Serie A teams on Inter Per Sempre's blog. Isn't he great for posting that for us?

Compare that to the last two years: 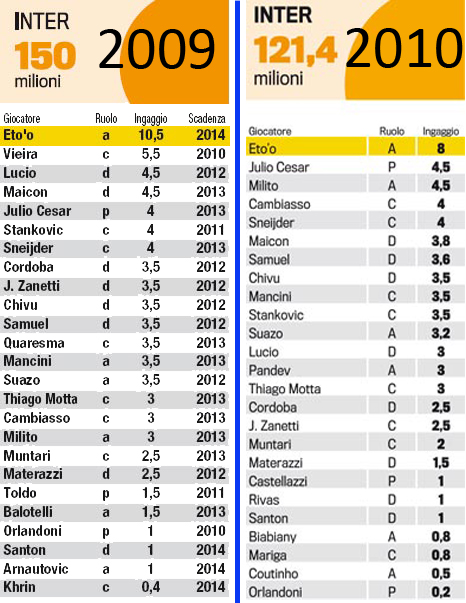 As we can see, our wage bill has jumped considerably even without Eto'o's 10 million a year. It seems we dumped relatively low wage earners (like Mariga) for higher ones (like Zarate). That junk adds up.

So, what do we think? Is the wage bill worth it? Or should the club try to drop it even more? Remember, these numbers are chump change when compared to EPL and La Liga leaders. They spend hand over fist. And given that in order to attract the best players you have to be willing to make the big payout, maybe wages are actually an important, legitimate expense for clubs. Seems to me, maybe a top three finish while still remaining competitive in the Champions League means you have to spread the cash around a bit.

Whatever the case, when I look at the list, the only player who annoys me is Muntari. No way Inter should be paying him 2 million a season to collect bench splinters and red cards. Unbelievable. The rest look pretty good. Deserved even.

At least, that's what I think.