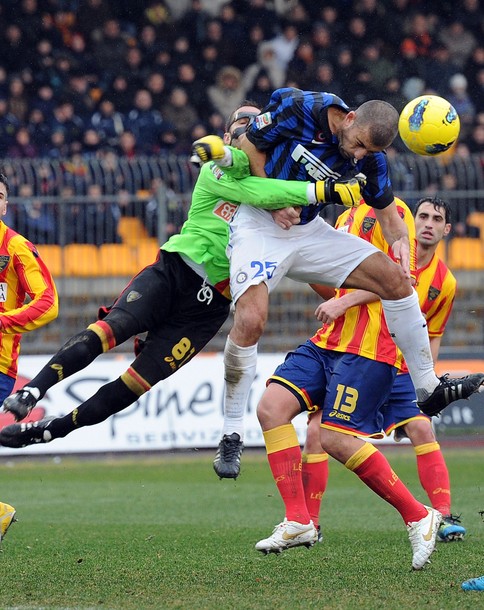 The time between now and then, I spent grousing in my head why our team seems to have lost the hunger for winning. I really spent a lot of thought and compared us to Barca, where they just don’t ever seem to lose that "eye of the tiger" – for those ‘80s children.

I mean, it can’t be the talent, because looking at Lecce and Inter on paper and Inter should never lose this game.

Maybe it is the talent, though. Games take their toll and trying to exert all the more energy to make up the past mistake of earlier this season when the team imploded. Also take into account the very tough games that surrounded this game – it was last Wednesday we tussled with Napoli and Champions League games are right around the corner. So our best players are stretched very thin… but even our best players aren’t exactly game changing superstars. We sold Ibra, Eto’o and even Mario who made a large contribution for us in the limited time that he played with Inter.

And having an Ibra or an Eto’o really made this team a little different in its construction than other teams. We could get away with a massively defensive midfield because it never had to be a creative element – Ibra and Eto’o were good enough that they could create on their own. They were in essence their own creative element. And if I had to say that we are missing something important it’s this: we aren’t passing the ball well enough. Too many easy turnovers and too many missed final passes.

But times have changed; Milito and Pazzini are completely different animals. Maybe it’s not that we aren’t talented enough, it’s that we now have the wrong talent to support the team . Maybe we are at the point where putting Cambiasso and Zanetti in the midfield is the exact wrong idea. I don’t even think that Zanetti had a bad game on Sunday, considering what his job is, it’s that he wasn’t the right kind of player we needed. What we need is more midfielders who can pass and run, not just run and destroy. But this makes Poli’s exclusion more puzzling to me, personally.

This might explain a lot about what Branca is doing, maybe. He’s been going to Brazil and looking for highly technical, good passing midfield type players.

Okay onward though this mess.

I don’t blame Julio for the goals and really he performed pretty well considering the big gaps in action for him. He was called into action far too much in my opinion. After the team was burned once from the speedy Lecce forwards he helped out the defense by patrolling further up in his box.

I liked Nagatomo and I thought Maicon was at least decent, if a little la-dee-dah. Lucio had his problems at times but Samuel was decent, if exposed a bit from the speedy Lecce forwards. To be honest, I was expecting Ranocchia in this game, even though he played on Wednesday.

In the first half we kept trying to hammer the ball up through the middle through Wes, which worked rarely since this is exactly what Cosmi was planning against. When we changed back to 442-ish in the second half – which was why Sneijder came off, by the way – we seemed to have more success going forward because it loosed things up in the middle.

But we got unlucky. But we didn’t really create as much as we should have against a small team. But we were generally very good at destroying their attempts to go forward. We were good enough at breaking up their play, but we just couldn’t do anything with the ball once we got it.

Obi was the only midfielder that really pushed the ball up in the 3 man midfield even if he made one mistake that a couple of passes later led to the goal – although Lucio and the team’s inability to score shares some blame on this one. Cambiasso did his job roaming and intercepting and Javier did his positional best. But it wasn’t what we needed. In retrospect, I would like to see the game played over with Poli in for Javier with Cambiasso deep in the middle and Obi and Naga pushing up on the left. I think that would have worked out better for us.

Sneijder was largely nonexistent really, but his was the position that Lecce was attacking/defending completely. So he didn’t do much outside a nice shot or two that were pretty long range kind of things. I don’t think he made any memorable passes and I don’t think he sprung anyone for an open shot. So meh.

Blah. There was nothing here, really. Pazzini, I think it was, had a nice shot that the Lecce keeper saved with a miracle action. And that was about it. Pazzini had a volley that I think is still climbing the stratosphere. Milito had some nifty hustle moves, but there wasn’t any service generally.

Working with what he’s got – basically a team that isn’t really a 4312 without an Ibra/Eto’o type and isn’t really a 442 team either, I can cut I Claudius a lot of slack. He’s done well over the whole season considering the team and organization as a whole is under complete flux. On the other hand, I would at least try Alvarez in the Motta role and tell Cambiasso to kick his ass if he starts roaming. Or I would try to put Poli on the field. He’s on the team, we might as well use him. Or I might have used more players who didn't play on Wednesday like Faraoni and Castaignos. Or I might have used Zanetti at LB to free up a midfield spot for a younger player that might move forward and back as we try to defend the counter all day.

So this is where I am at. We have a team that is really built around the superstar forward putting enough pressure and keeping the ball long enough to paper over the creative deficiencies of our midfield.

And this is why there is so much talk about Montolivo and Kucka. Neither of these guys are box to box thoroughbreds or defensive destroyers. All they can do really well is pass the ball and play the first ball out of the midfield that advances the ball up and take pressure off the back third. This, by the way describes Motta almost perfectly. The only thing missing is that you get something a little extra with Motta – when he’s on he can actually play enough defense to be a pain in the ass to other teams.

We have proved that we don’t need the ball for 50% of the time to be effective, but what we do need is to string enough of a move together to get the ball forward and attack with effectively. If we are willing to cede possession then we need to more efficient to compensate for the lack of opportunity that ceding possession entails.

I really like to think that Branca has noticed this shit long before I did and the attempt to paper Forlan and Zarate over the Eto’o sized hole in the team was an effort to keep some idea of quality in the attack position of the team to buy time until the team had a chance to change the midfield and the defense over. Don’t forget that if we change the way the midfield works than the defense will have to change as well. We can’t go forward with big hulks that are most effective in small areas. That 3 man defensive midfield screen can’t be there if they also need to create more forward. So we are going to need defenders who can control a wider range of area. Think about that for a bit, when we start to welcome Juan Jesus the CB with experience as a LB.