Share All sharing options for: Inter v Parma: A Second Chance to Make a Good Start 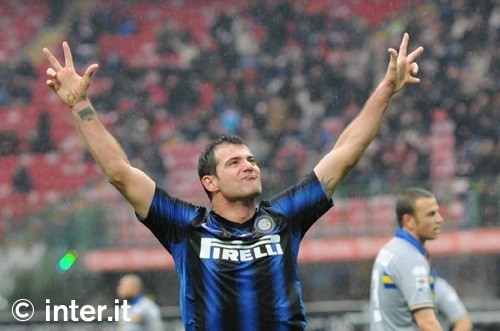 Well, the squad is back from vacation so I guess that means I should get back to work as well. I hope everyone had a nice holiday vacation time (if you got a vacation, that is). Mine was a bit hectic but overall, rewarding. I am looking forward to getting the new year underway and starting out on the right foot - the winning foot. Of course, we are still without many key players (or, at least one key player) but as is the Inter way, I am sure CR will cobble something together with bailing wire and duct tape.

What: First game of the new year. Lookout Parma, here we come
When: Saturday, 8:45pm local time (11:45 am pacific, 2:45 eastern)
Where: the freshly re-sodded San Siro
How to Watch: This one is live on tv. In HD. Practically everywhere. Or there are streams: Rojadirecta
, Ustream, and ATDHE.net
Liveblog: You better believe it! Be here 15 minutes before kickoff

As it happens, Inter has quite a good home record against Parma. Out of 20 games, Inter has only lost one. Sure, we drew six times, but for the most part, Inter owns this fixture. And I aim to keep the good times rolling. History also says that this is a pretty high-scoring fixture: last season we scored five to their two. Deki got a hat trick (including two in two minutes), while Crespo got a little back with a double against his old club. It was an amazing game:

Parma come to this game firmly mid-table with 19 points. The table is tight, though, so a win tomorrow would see them move up to kissing distance of an EL slot. They have five wins, four draws, and seven losses. Really, not so terrible. Their last four games were draws (two 3-3, two 0-0) after a 0-2 Coppa Italia loss to Hellas Verona (of Tim Parks fame) and 2-1 loss to Novara. Not so great but at least they have been scoring goals recently. Before all that, though, they beat Udinese 2-0 so they have proven they can run with the big boys (and kick their asses as well). Basically, they have a big road problem: only one win and one draw in seven games. That has got to hurt. And I am sure it is a statistic they would like to turn around.

Parma have a great mix of young bloods and old hands on thier squad. Giovinco is tearing it up in front with seven goals, while our old friend Jonathan Biabiany and MAD's mancrush, Danielle Galloppa, both have two. Sergio Floccari has found a new home and with two goals, he seems to have settled in quite well. Our other old friends haven't done quite as well: Hernan Crespo has yet to score (probably because he has hardly seen the pitch) and I think Obiora Nwankwo has only played one game this season. Betcha he doesn't even make the bench tomorrow (anyone remember, do we still own half his ticket?). If nothing else, Biabiany will want to show Moratti what he gave up. Look for him to run our defense ragged. 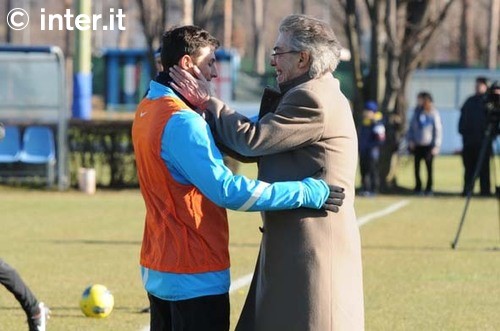 Moratti came to training today for one of his semi-monthly grope sessions. He sure likes a cuddle.

CR has called up 20 players:

You will notice that Wesely Sneijder was still not called up. It has been, what, two months now? Forlan was similarly left off. He turned his ankle in training last week. Chivu and Stankovic were also left off, although this seems to largely precautionary. Or, at least that is what CR suggested in his presser today. He also said that he wanted to start the new year with the same bunch he ended with so it may be a bit more of a technical choice than strictly fitness related. Or at least, that is what I read between the lines. 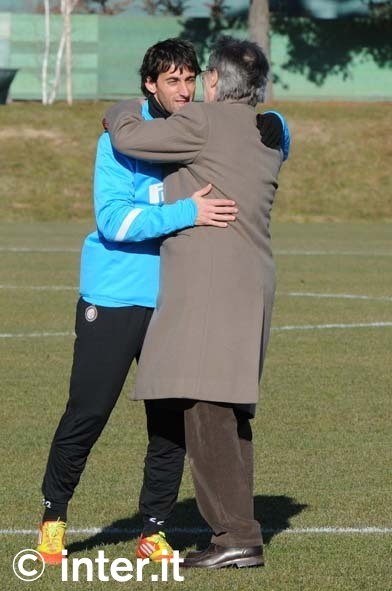 More cuddles, although these seem somehow more menacing... like Moratti is whispering something about glue factories and goals - or lack thereof - in Milito's ear.

Oh, and keep an eye on both Motta and Maicon: they are a card away from suspension and, as we all know, the derby is our next fixture.

Ranieri was clear that he is going to continue in the same manner as we ended last month: the good ol' 4-4-2.

So, what do you bet we have:

Ok, hands up: who made a special Christmas wish that they would never again be subjected to the Milito Pazzini pairing again. Ugh. But what are you going to do? Spend outrageous amounts of cash for a has-been locker room cancer, I guess. (I am still clinging to the hope that all this Tevez talk is only to drive up the price for Milan)

On the up side, the San Siro just got a new turf laid. Hopefully that means no more slipping at crucial penalty-taking times. 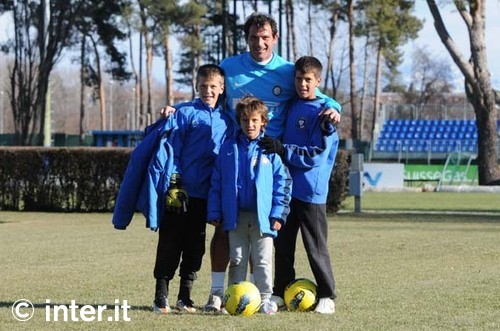 Huh. Who told Deki it was family picture day? Dont get me wrong, I love the kiddies, but it seems sort of odd that he would pose with them for the web page.

Ok, so what are we up against: a young team who we know is young, fast, and one of them is quite good at dribbling (follow the link, you wont be sorry). This will be a key test of the team's concentration and determination. If they can find their game faces again after all the panettone having babies and what not, if they can pull this off and win, it will show a real commitment to making lemon-aide out of this stinker of a season. Plus, it would be our fifth win in a row - something Inter hasn't accomplished since Mou and our perfect season (right at the end, remember, when it all seemed somehow magically inevitable?). Certainly, it would show we mean business after all.

Winning isn't enough. Some of these teams have to lose if we are going to move up the table.

As for the rest of the weekend, a loss for Lazio would be wonderful, but considering the opponent, not likely. Similarly, Udinese have Genoa and, even with the addition of Gilardino, I just dont see Genoa pulling this one out. Still, a nice draw is within the realm of possibility. Let's all hope for that, then, shall we?.

Who the hell knows with Roma. Usually I would pick them for the win over Chievo, but they are so Jekyll and Hyde, you never ever know which version will show up. I guess we can all dream, though, so go Chievo!

Napoli Palermo will be the big game on Sunday and screams goal fest. A nice three all draw would suit me just fine (oooo, with a sending off and a missed penalty!). I just assume that Milan, Udinese, and Juve will win - why bother hoping otherwise. Plus, that way if I am wrong, it is like a happy little surprise present. Yay.

I guess what I am saying is that the calender isn't doing us any favors. If we want to keep up (or, hope against hope, gain some ground) we are going to have to take things in hand and go out and win. I am not greedy, I dont need another 5-2 drubbing. A nice 1-0 win with no injuries or cards to our bad boys would be the perfect start to my weekend (ok, maybe a 2-0, those single goal games are really nerve wracking).

So let's start the new year right - come back and join the liveblog so we can all revel in our victory or wallow in our defeat together (dont ask me what we do for a draw - we will just have to see where the mood takes us).

Ok, so I know the content is out of date, but I thought this would class the place up a bit.