Inter make their first victory at home after a rollicking first half that saw Inter score 2, concede 1, hit a crossbar and hit a point blank shot wide of net. Chances there were aplenty in a very open first half. The game, inevitably perhaps, slowed down considerably especially after a red card issued to Rodriguez of Fiorentina. However, despite the pace slowing down quite a bit there were still plenty of chances for Inter including 2 from Milito and 1 from Ranocchia.

Share All sharing options for: Inter 2 - Fiorentina 1; the Good, the Bad, and the Ugly

And that was the story of the game really. Inter made more chances inside the penalty area than Fiorentina did and capitalized. Which was quite a contrast to the last game Inter played at home against Siena where Inter had more chances inside the penalty area and didn't sink a one. Making chances and then capitalizing on them... if there is a way that Inter is going to keep it's nose in the race this season, there it is. Call it cynical, but if it keeps us hovering around 3rd place all season, I'll take it.

Ranocchia and Juan are really making me feel good about the future of this team. If there is something that is a little scarce in Italian football right now it's good defending. Look at the scores from last weekend! Ranocchia has been given time and what seems like a psuedo-leadership role in the back. It's really making a difference in the way he plays. Juan's card was purchased last mid season for peanuts and that time plus the time on the field he's been given has really made a difference for his confidence. He is really playing as though he has no fear of failure. The inclusion of Walter Samuel as a sweeperish/third defender to clean up any mess in the back has been a real help to the two neophytes. They just look confident and willing to challenge. The proof is in the pudding, though. Inter have shipped less than half the number of goals that were conceded at this time last season (6 vs 13).

According to the hotsheets, no Inter player had a wider ranging grade for this game than Nagatomo. Some thought he was fantastic threatening Fior up the field while doing a great job limiting Cuadrado, one of the big transfer gems this past summer. Other newspapers thought that he didn't do much other than run a lot and lure a second yellow on Rodriguez from the ref. Here's where I come down, but since I have him the "GOOD" section it shouldn't be too surprising: He was able to man the left side of the field without giving up a score or hurt the team with cards. Plus he threatens enough to keep the Fior defense cheating to the left. Also, he's a corner machine, when he goes to the line it's almost always a corner. So defensively good, attacking threat, great work rate is off the charts, and he gets on well great with his teammates. I can't think of a negative thing he did in this game.

Lastly there's Cassano and Coutinho who worked very well together. Both players are quick thinkers and have insanely talented feet. watching them in the first half together was loverly.

Stramaccioni made the perfect plan for this game, he made perfect substitutions, and his post game comments were once again on point. It was obvious from the get go that Strama wanted Inter to hound Pizarro and Valero as high up the field as possible. He wanted to attack Cuadrado's space when Inter had the ball in Fior's end of the field. And he wanted to force Fiorentina to defend running towards their own goal by working the transition with suddenness. The plan was good, the execution - if Fiorentina players' post game comments are a double check on the visual evidence - was decent and the adaption to the game with substitutions was also very decent. I have no problems with the leadership/brain trust on this game.

After the game Strama had this to say: "I got a little angry because we left the game open despite having numerous chances. We should’ve killed it off, as a match like this is always full of potential pitfalls... Tonight we exhibited determination and hard work. It was a show of strength and of quality, above all because Fiorentina are such a dangerous side."

I love what he said because it showed that there was more work to be done - and it's exactly the problem I had with this game. Inter could have killed this game off in the first 20 minutes and Milito had a very credible chance at a hat-trick. But more than that, all this happened against a very good Fiorentina team that could have made us pay, as Siena did, for not following through on the chances that were afforded to the team. If there were two indicators that this is a good not great team with decent but not great talent, it's this - we are not finishing our chances and we are not able to win convincingly at home. Great teams capitalize, and great teams always win at home.

The good news - for me, at least? I still think this is a better Inter than last season.

Cassano and Coutinho have got to get their collective stamina up to the standards of a 90 minute game. This was the first game that Cassano was on the field for a whole game in what must be a decade - I say on the field because I think it's too much of a stretch to say that he "played" for 90. And Coutinho, who was very good for much of the first half faded far too fast for a 20ish year old. I love the kid, but he's got to get the PT stuff done otherwise I have no problem with him sitting.

Other than the penalty, which was well taken, I had a hard time liking MIlito's game. I can cut the guy some slack because with Palacios injury he had to play a lot more without any breaks, fine. But I knew that there might be an issue when I saw Milito take that penalty. Milito's best penalties, the ones he takes when he's fully confident of his powers, go high just under the crossbar and are laser beams off the spot. This was a hard shot, but he went corner. It made me wince and wonder. Sure enough he ate 2 more chances.

Am I the only one who's noticed how in the last several games we tend to attack almost exclusively from the middle or the left? Why aren't we attacking on the right? Because Cassano and Sneijder instinctively drift to the left - even when they are supposed to be in the middle - every game and the attack goes through those two, that's why. What this team needs, and needed against Fiorentina,is a midfielder or attacker who is comfortable on the right side of the attacking third. When Naga is on the right, it's a little more balanced, but when he's on the left and Pereira isn't playing, there is a problem. You know who is comfortable on the right? Palacio and Alvarez. You know who hasn't been available recently? Palacio and Alvarez. I am hoping that when those two come back and Naga moves to the right more often we can get a balanced attack.

The uggo section starts with the midfield's ability to hold possession. Inter were able to use the midfield to good purpose, but it wasn't able to sustain possession in the Fior half of the field. Now, a large part of that is a result of Fior being a very good team with very good players in their own right - Inter weren't playing alone, after all and this is a professional league game. 100% possession might occur in video games but in Serie A, every team is going to get their chances.

Having said that, this is still a part of the game that Inter can improve and it's not going to improve it just by throwing on Coutinho or Ricky. These guys aren't really midfielders in the strictest sense. The midfielder that Inter needs is more jack-of-all-trades than a player who is only proficient in one of the three aspects that a great midfielder should be great at. Inter needs a player who can recover, set up and attack. Coutinho and Ricky can set up but they can't recover and I am not sure that both are good at shooting or crossing. Plus I am not really sure that they are midfielders at all, despite what the team roster labels them. We need another Thiago Motta/more reliable, not made of glass Thiago Motta. Someone who is a good all rounder who can play the classic center midfielder in a midfield three. Recovery of the ball in the midfield is something that is key for me, but it's not the whole game and the little more possession we get in the midfield is that more relief we buy for the defense.

Lastly the finishing in this game was horrific. We had 6 chances at Fiorentina insider their penalty area and we didn't make them pay more for letting us get in there and shooting. We have to do better if we don't want a repeat of 6th place.

Next up, Europa League and then The Derby. Hooha! No rest for the wicked... 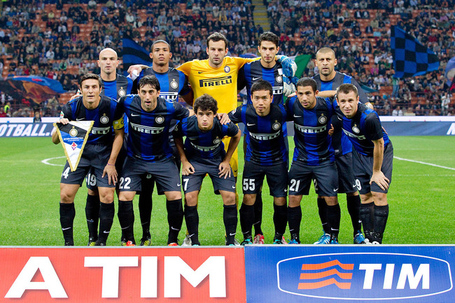