Inter extend their win streak to 5 games in a row in all competitions and 4 in a row in Serie A with a win at home - that's right at home no less - in an entertaining game against Catania 2-0.

The first half was a little hit or miss for our heroes. Catania got 2 good chances right in the middle of the area and Inter scored on a wonder back post header by a sneaky Cassano set up by a beautiful combination of Milito and Cambiasso.

It actually surprised me how uneventful the first half was - I watched the game backward, second half first. Other than the goal, I didn't think that there was too much to get excited about in the opening act other than some good stretches of possession,

The second half, however was an Inter joygasm. Strama kept three attackers on the field and stayed attacking all game long. Milito and Alvarez both had 2 good chances each and Ranocchia hit the post before Palacio hit a nice volley to wrap up the game. Apart from the odd Catania foray, Inter really dominated the second half creating the vast majority of their chances from open play but also threatening from set pieces and, of course, the odd counter attack.

There is a lot to take away from this game, I feel. First of all, and this isn't the first time he's done this, but Strama really wanted that second goal. He left three in the attack all game long. I think that the Milan game left a bad taste in his mouth because of all the defending the team was doing and I don't think that given his choice, he would like to have such a defensive team. And I don't think that being defensive is necessarily a bad thing, if that's that team you inherit, then you have to make do.

But given a choice, I think that Strama wants a team that he can do the equivalent of a Kamikaze dive with. But he doesn't have that team. Which brings me to my second point to take away from this game. Adaptation. Strama has Palacio and Alvarez back from injury. He has Cassano and Coutinho lighting it up. And he has Milito who is doing his usual October fasting but we all know that otherwise he can score reliably. He also is in a must win situation considering all three of the teams above him in the table are in tough games and Inter has a chance to gain some ground on some teams who won't drop many points.

So what does he do? Why, start as many forwards as possible and don't ever let that number drop even if the team is "protecting" a lead, of course. Giving 4 out of 6 forwards game time in this one is a bold move - some might say too risky - but you have to admire the guy's sand. He wants to attack. He needs the 3 points. He has more than enough attacking players to use lots of them here and then use completely different attackers in the Europa League. So he puts those attackers out there and in the first half the team's not really providing the end result he's looking for - other than the 1 goal lead, of course. But the second half... I can see why he was glowing during the presser afterwards. THAT is what he was looking for.

Okay, this one is just for me, but I am in continual love with the defensive effort by the back four. I continue to find Handanovic a very secure keeper. Right now I am not missing Cesar, professionally. I think that the back three, especially Ranocchia is doing a good job. There were opportunities for Catania in the first half, but I think there were some words in the half about being more aware and I was duly impressed in the second. In eight games this team has allowed just six against. We are right up there with the best teams in the league. Considering the age/experience of Juan and the huge difference we are experiencing from last season... I will so take this one. I wonder if those people who criticized Inter for letting Lucio go on a free this summer are still flapping those gums. I know I'm saying, "WTF?!!?!" a lot less these days.

Okay, last thing to take away from this game for Inter - keeping up the momentum that the team enjoyed from before the International break. It's always the way. Things are rolling, the new formation is working and there's a huge win in the derby. But then players are called to the ends of the Earth to play for another coach who might contradict what Strama has been trying to train, there's the worry about National Team places and there's the wear of travel on high performance bodies. It's always a worry that something bad will happen to a player in good form when he comes back from being away from the club team. But the guys looked good. They looked fresh, focused and very well prepared, I have to say. Plus kudos to everyone on working hard to put in the variation on the formation and then making it work during the 2 weeks. Strama made a nice adjustment on it and the players obviously worked hard to learn it. I think that shows a lot of character.

Next up, Partizan followed quickly by Bologna. 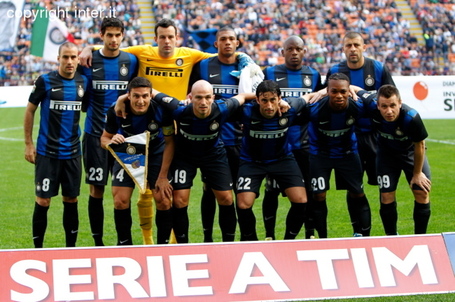