I bet that this won't be the recap you were expecting. The Derby is over and tempers are finally starting to wind down from a contentious and hard fought affair. Time to recap and reflect, dontcha think?

It might be worthwhile to take a step back and use this International break to reflect and meditate on the wild and woolly opening overture to this season with a focus on the Derby that was played 2 days ago.

It might be worth pointing out, as some have already done in the comments section, that to the neutral this was probably a pretty boring or poorly played game. When I first heard this review I bristled and thought, All derbies should be a lot less "technical" than your average game. It's about passion and pride, for Pete's sake. You know, the hind brain, the lizard part where the red haze lives and devours all that technical stuff in the frontal lobes. The part that makes you instinctively hate those guys in different colored shirts that otherwise are just like you...

But a day later and with a lot more cold medication in me, I started to see their point. It's hard to understand why this Derby might be meaingful if you are not intimately aware of, or care about, the finer points at stake here.

So this Derby was definitely for the supporter of one of the Milanese clubs and not the connoisseur. What makes this Derby so important, then? In the past the winner had a leg up on important Champions League places or were on the road to the Scudetto. Things have been... reduced, shall we say, in Serie A ambitions for these two clubs this season. Presently, it's more about validation of direction. Both clubs have changed so much in the past 2 or 3 seasons - more than Italian clubs like to change in a decade, really. The idea of risking that much change is a frightful thing for an industry where any deviation from the accepted or the "norm" is criticized so severely that innovation is often the result of outside forces crashing into the peninsula.

* But that idea could be the focus of a series of articles, we are right now dealing with a small part of a larger context.

So, the risk of losing the game carries with it not just the loss to cross town rivals which is bad enough with reminders of those hated rivals everywhere, but there is also the notion that both teams are rebuilding and it's those guys right over there that are getting it right! Your team is screwing it up! That level of disappointment, that fear of being the dummy who flushed millions away - or supporters of said dummy - trying to right the ship really drove this game, in my opinion. It wasn't the rewards of winning, it wasn't the placement in the table or the dream of UEFA's millions in the Champions League or even the exultant pride and celebration of winning the Scudetto.

And let's not forget for one minute that it could very well have been us that lost this game and cast as the dummies that flushed millions in screwing up this team rebuild. It still might be. The season is far from over...

But at least we have the feeling, at least I do right now, that things are headed in the right direction, right down the middle between Charybdis and Scylla. Lets take a further step back, this is an Inter blog they tell me, so we should start this shindig from that perspective. Not that Milan didn't have a lot at stake riding on this game as well, but they have their own place to discuss those things.

I am not going to recap our whole summer and September. But I will point out how precarious our positioning was heading into the Derby. We had won 4 games and lost 2 in the League and we had won 1 and drawn 1 against 2 teams we should have beaten handily in the Europa League.The only bright spot for the team in this period is the fact that goals shipped have been drastically cut - that's all the positive that I heard about the team thus far from the media. It was an improvement over last season to be sure, but still far from ideal, especially the loss to Siena. There were questions about the coach, there were questions about the quality of the players and there were questions about the performances, or lack thereof, on the field win or loss. There was pressure everywhere and in the last game review I said that a solid performance here would go a long way to easing that pressure for the team.

And this is where a lot of my optimism, long term optimism I should clarify, is coming from. The team was winning and it didn't concede. How many times could we Inter supporters say that sentence in the last 2 years?

The team was at a disadvantage and didn't give up. The defense, two thirds of which are under the age of 25, was the solution, not the problem. We are in "safe hands" at the goalkeeper position. Our most problematic area for 2 seasons is flourishing under fire! All of these statements would have been fantasy under Benitez, or Leo, or Gasperini, or Ranieri.

OUR DEFENSE HAS KEPT US IN A GAME! It more than kept us in! It's beautiful to be able to shout that from the rooftops! Folks, you build a team from back to front. The building blocks are here. Goalkeeper, and at least 2 centerbacks that I now have some trust in (for the record, it's Juan that I don't entirely trust yet. Hey! It's only been like 7 games he's played for us, you know?). Are they young-ish? Yep. Are they going to make mistakes in the future that will make you all jeer at me? You bet! But there is something there. I get that feeling. And considering the likelihood of Inter selling Ranocchia and/or Juan or Batmanovic anytime soon, that good feeling about the defense is really very long term.

Look, I am the guy who has been harping about turning over the team forever and ever ago. It's one thing to criticize as I have done from the perch of this blog and it's another to witness it happening - with the worry that it all might go wahoonie shaped. I am at this moment very happy that the team has gone out to get Batmanovic, despite his relatively high cost and somewhat cynical treatment of Cesar, a player I admired a lot but had become unreliable since his auto accident. I am happy that the team paid an exorbitant amount for Ranocchia. I am really, really happy that the team picked up Juan for as little as they did, even though they needed him to train with the Primavera for half a year to get ready for Serie A.

As much as I am in the midst of a Bromance with the defensive back 4 at the moment, I would like to expand the circle of my adoration to the coach. The formation he came up with to highlight the qualities, if there are any, of the squad and to hide the deficiencies of the midfield back against Chievo has proven to be a stroke of genius and much needed bravery. The midfield deficiencies are still there, there is nothing he can do about that now, but the base of the team is very solid. He has concentrated on getting the 11 men to act as a collective and he has ramped up their PT to make sure that fatigue is less of a problem for us, compared to previous seasons where it was all too common for Inter to run out of gas.

Inter were more of a unit against Milan, I don't think that anyone can debate that. Playing defense is a game of position, support and sacrifice. Inter had that all over Milan as the circumstances of this game showed. It looked like we practiced this stuff before and that preparation is the hallmark of good coaching. As is the attitude of the players to the coach. They love him, it's plain to see. Hell, right now, I love him too. But, more than that, they trust him. It's easy to see this. It might not always be pretty, but I am much more likely to give him the benefit of the doubt.

Maybe I am overreacting and maybe I am reading too much into this one game - or collection of 10 as the case might be. All I know is that the team is organizationally in uncharted water and have made very public commitments that locked them in this direction. It's scary and worrisome to not know where the team is headed. But right now I am as optimistic as I can be - long term, remember, long term. I can see the lack of quality in the midfield. I can see the lack of the "right" kind of wide forwards that Strama wants. I can see Milito with his age, his annoyingly slow starts and dry spells. I can see all that and I can understand that frustration that supporters of this team have with those deficiencies.

But going back to the top of this mess, is there a validation of direction for this Derby? For the moment, yes, I think that despite all the flaws, and they are legion, Inter is heading in the "righter" direction. Neither Milan nor Inter are giants in the league at the moment, but I can see Inter working their way out of this mess without buying their way out at too great a cost, repeating the mistakes of the last 2 decades. Wages are way down, the youth project is in high gear (believe it or not), there is a leader of the ship and there is, at least, the faint promise of a stadium. Right now, right now, there is no iceberg in sight... even if we are still the North Sea, right now.

Okay, that's about enough out of me. Make sure you guys use those FanPosts to give your reactions to the Derby, Inter's direction and anything else. It's the international break and it's the perfect time to reflect and put idea to "paper".

And congrats to the GIPATI winners. You earned it, that stuff is tough. 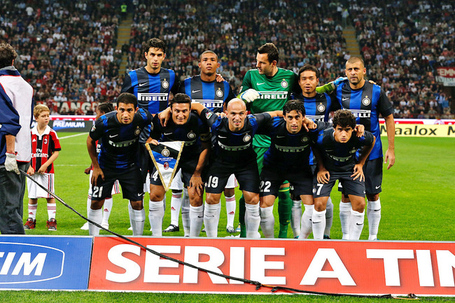