It was a game that many people felt history and injuries would overcome form. In a close and tense matchup Atalanta defended their home turf from Inter with a 3-2 scoreline.

With the amount of movement in the roster, especially in the back, one could say that this game was a blip on the radar. However, there is still the question of how will the team respond. The problem with a team like this, with parts moving from week to week, and some players playing for the first time after protracted time off, is that there is no way to predict performance.

To his credit, Strama hasn’t been allowing players to blame bad calcio on injuries. But in this game, there might be a case. With 2/3rds of the 3 man defense on the shelf Strama went with a back four. The problems of earlier this season re-emerged and the middle of the goal mouth was at times left unchecked as both central defenders often didn’t stay narrow nor deep enough.

Other than that, rather niggly but crucial problem there was a lot to like in this game as Inter matched the Atalanta fury early on. It isn’t the first time that a team tried to sprint to a lead so that afterward they could sit back in their leisure. And Inter responded pretty well, I thought. Palacio had several legit chances in the first half that I thought the goalkeeper was extraordinary to deflect. Once again, a keeper was having the game of his life against us.

Personally, I like the 433 formation that Strama put forth, and if we could fix that goal mouth problem, I would like to see more of it. The 343 is hard on our defenders, and frankly we don’t really have enough to muddle through if we suffer another injury spate like we did for Sunday.

Another plus to the 433? I do believe that Guarin plays best in this formation. And a good Guarin can make a difference... assuming he's healthy, of course.

This brings us to the problem/nonproblem of Silvestre. Every season it seems like we get a pair of polarizing players. Last season it was Nagatomo and Forlan. This season it looks like its Silvestre and Pereira. Personally, I think that is going to be fine and I am looking forward to the day when we can start on one side and Naga on the other. And looking closely at the criticism, it seems that his transfer fee and his lack of every game frequency is the real issue.

Silvestre is another kettle of fish altogether. The controversy is solely his performance and this last weekend is no different. There are those who stress caution and more needed playing time when it comes to him. Others say he simply isn’t Inter caliber and should be shipped out. There are plenty of those who said that whether or not he got the ball he shouldn’t have been so aggressive. Others have called the penalty a mistake by the ref.

There is probably some validity to both views; Marco Materazzi said that Silvestre was totally in the wrong. He might be right, but I have a hundred dollar bill against a bag of wooden nickels that Marco does the exact same thing. A timid, safety first defender, Marco is not.

And replay clearly shows that Silvestre got the ball. What gets my goat would be that this is the second time in as many matchdays in Serie A that opponents were just handed goals against us. If the ref association was trying to make sure that people thought that refs were incompetent rather than dirty, job done.

This still leaves 2 other goals scored in this game and at least one sitter that Denis put into orbit. There has to be some effort to fix this from Strama’s end. Considering that the defense was committing the same sins before suggests that this is a systemic problem. Probably, the central midfielder needs to drop deeper to cover if the two central defenders are holding their zones. Or the supply from the wings needs to be pressured more and faster. Either way, it seems that the problem is bigger than Silvestre. He might still be A problem, but there might be more to it.

Other than that perplexing weakness in the gameplan, I really don’t have another major complaint about this game. The midfielders made plenty of stops infront of the defense. There were plenty of chances made by the forwards. A minor complaint I have might be the lack of really accurate passing I witnessed in this game. I am not talking about the Cassano wonder-should-be-assists. I am talking about moving the ball through the park up the field in a chain of more than 3 passes. We are missing that fulcrum that can make the passes and also be the bail out for players who are in trouble from pressure. I would like to think that a player might be coming in January, but I won’t be holding my breath.

Lastly, I thought that the game was only in jeopardy when the second goal was scored. Inter looked like it was making a second half push for the lead but Atalanta, to their credit, scored against the run of play.

Over all, I can’t say that I was expecting a win from this game – I would have been happy with a win, don’t get me wrong – but I was expecting more periods of dominance. Or more ruthlessness in front of goal, at the very least.

In a completely different tack… is there any reason we don’t ask for the sale or loan of Cigarini? We need a director, right? He’s a director, right? And he’s out of favor at the club who owns his card, right? Does anyone else think that this could be a really low cost, short term solution? It’s just a thought. 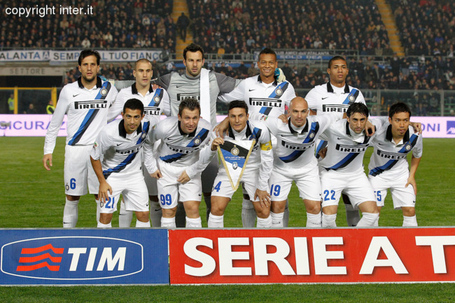