Inter v Cagliari: Time to Make Up Some Points!

Alrighty. Juve dropped points and Napoli are snapping at our heals. I say that tomorrow is time to make up a couple points and keep up the pressure. Cagliari, while decidedly provincial, no team in the Serie A is a gimme (hello? Siena anyone?). Inter are still struggling with injuries (Guarin), but the return of some key players (Ranocchia) is a welcome relief. And what do you know! Mariga is back in the mix again. I wonder if he still has amazing powers of mind control.

Share All sharing options for: Inter v Cagliari: Time to Make Up Some Points!

What: Inter v Cagliari, Serie A matchday 13 (ooOOOooo, spooky number 13)
Where: San Siro, Milan
When: Sunday, November 18, 3pm local time (6am pacific, 9am eastern) Ouch, that's early .
How to Watch: Live on RAI International and beIN Sport1 or find other channels here. For streaming options, try here. The game will be rebroadcast at 8am on beIN Sport Espanol for us West Coast comcast chumps.

Liveblog: Not me. I don't want to make promises that I cant keep and 6 am on a Sunday is a bridge too far. There is still hope, though, that Kirby or MAD will hear your plaintive cries and be moved to run one. So check back. Just to be sure.

MAD is hosting the liveblog here

The All Important Statistics

For a bit of perspective, Inter hasn't lost this tie since 1995, and then it was only 1-2 with us scoring one of their goals. There have been some really epic wins like the 5-1 with Simeone and Baggio both getting braces in 1999, but more recently this has been a cagier affair. For the last two seasons, Inter has won this tie by a single goal. Two years ago it was a 7th minute header from Ranocchia that gave inter the win (it finished 1-0). Last season Motta and Coutinho both got on the scoresheet before we allowed them to pull one back just before full time. (drat!). It was an auspicious game: Ranieri's 200th win in the Italian professional leagues and Faraoni's Serie A debut.

This is the closest thing I could find to highlights:

First of all, for those of you who watch a lot of English coverage of Serie A, it is not pronounced Kag-lee-ARE-ee. In Italian, GLI is pronounced as sort of a "lyee" noise in the back of the throat. Phonetically it is expressed /ʎi/. As a native English speaker, this sound is almost impossible for me to say correctly - it isn't a sound that is used in English and, as such, many of us have difficulty even recognizing as being different from a simple "Lee." Even so, I feel it is important to at least try... so everyone all together: KA-lyi-ar-ee (emphasis is on the first A). See? Now dont you feel superior? I know I do.

And this concludes our language lesson for the week.

Cagliari sit just about mid table with 12 points. They haven't really started well, with more losses than wins at this point (4W, 3D, 5L). They have only scored 11 goals this season, which ties them with Palermo for the second worst scoring record in the league (Pescara is the worst with nine). They are better defensively, conceding 17 goals so far. For comparison, Juve and Fiorentina have the best defense with 9 goals allowed, while Roma and Chievo have the worst at 23. Inter is ok with 13.

According to Who Scored, Caglari is good in the air and with counter attacks but not so hot at finishing or defending against set pieces. Ok.

Their high scores are Nenê (3 goals) and Marco Sau (2). Other players to keep your eye on Daniele Conti (captain and son of Roma's Bruno Conti), defender Danilo Avelar, and Belgian midfielder Radja Nainggolan (dont ask me how to pronounce that - I have no idea).

Unlike Inter, Cagliari have pretty much a full squad to choose from, only central defender Lorenzo Ariaudo is injured. Plus, they have had a full week to work. That is, I dont think they had anyone called up for the international friendlies, or not more than one at least. Still, Pulga is being cagey about formations saying:
"I will decide at the last minute, based in part on Inter's formation. I have many possible choices in attack, we are many and all are good."

Pugla also knows that this will not be an easy tie for Cagliari, saying: "It will take the perfect game to get a result against inter Milan. Due to the quality of the staff, the Nerazzurri are from another planet. We are calm, we have nothing to lose, but we are aware of the fact that we must not make any mistakes. It takes only one to be imediatly punished by Inter. History is ful of teams like ours, who play very well against a superiour adversary and return home empty handed."

Well, let's all hope so.

There are some surprising names on the call-up list today:

Yep, Mariga and Coutinho are back. Now we just have Chivu and Deki on the "Who Knows When" injury list.

Strama updated the press on many of players' progress today. He said...

Alvarez, Palacio, Gargano, and Pereira: "They weren't in tip-top condition when they returned on Thursday but they've had a few days to recover now. I hope they don't feel the effects of the international games because we're short on numbers in midfield and we've lost Guarin."

Alvarez: "He's doing fine, great. We're very proud he was called up to the Argentina squad. At this stage of the season I'm making other choices but we have great faith in him."

Sneijder: "He's better but I decided not to include him in the squad."

Coutinho: "He's an extra string to our bow. He offers us something different and that can only be a positive because it means we can mix things up and select different qualities in attack."

Guarin: "... [He] would have eaten grass to be able to come back for tomorrow's game but he hasn't completely shaken off his problem yet. Besides, not answering his international call-up also meant dealing with his injury in a certain way. He might make it back for Kazan, but we'll have to see what the doctor says."

Samuel: "[He] is the best defender we've got at Inter objectively speaking, and he leads the way at the back with his experience. He's a leader and a sure thing."

Mariga: "... is stepping up his recovery process because he's desperate to return. I know that if I need him he'll be ready."

Duncan: "Alfred is one of my biggest regrets. I've been able to give him much less playing time than I'd have liked considering how much I rate him. It's my fault alone. He's an important player but in January I'll weigh up whether it might be more beneficial to send him out on loan somewhere so that he can get games under his belt, as I did with Longo. I was really pleased for him that he received his first international call-up. We'll try to decide what the most intelligent course of action is between now and 1 January."

Ok then. Alvarez is good but Strama isn't choosing him. Sneijder is better but ditto. Is it just me or does it smell more and more like this is his last season at Inter? And there has been big talk that Alvarez will go on loan in January to Spain.

As usual, I have no idea who Strama will play. La Gazzetta things that Ranocchia will start along with Silvestre but I just dont know. Remember, we also have a midweek Europa League game to contend with (on Thanksgiving of all days). Who Scored predicts something entirely different. Whoever strama picks, I just hope we have the same sort of response to defeat that Juve had last week and we had had after Siena. Now, I dont need to beat poor Cagliari 6-1 or anything crazy like that, but a win, in my mind, is a must and a clean sheet would be stupendous. And I think we can do it. Or, at least, I hope we can.

So let's go out there and grab us some Second Place!

And can I just say: DAMN! Cordoba cleans up well. I think the word that best describes it is Styling! 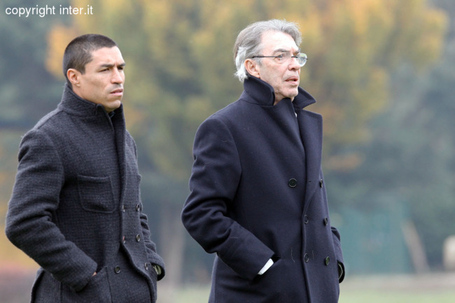