Share All sharing options for: Trofeo Tim, CHECK! Now on to Como 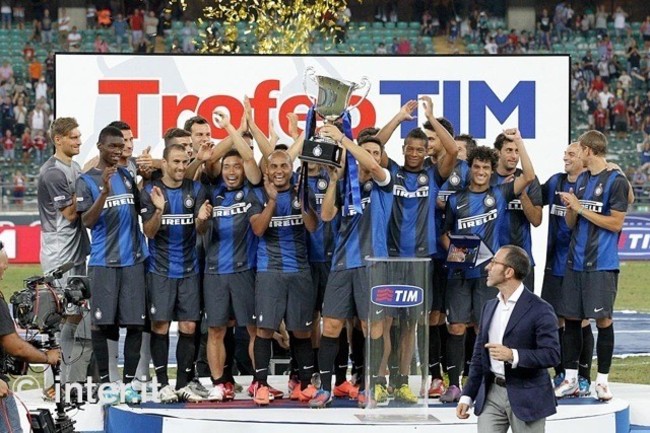 Thankfully Inter has successfully negotiated the murky waters of the Trofeo Tim. The win is nice (and helps with fragile player's egos) but that we came away unscathed from injury is the main thing. (furiously knocking on wood) Inter's next stop on the way to match fitness is against Como (Tuesday the 24th) then Celtic at the end of the week (Saturday the 28th). After that Inter's season begins with Europa League qualifiers on August 2 and 9th so there is no time to dawdle!

By the way, if you missed the Trofeo TIM or just want to relive the glory, you can find the matches here.

Como has a long and storied history in Italian football. Well, they have a long history in Italian football. They were founded in 1907 and have spent most of the time playing in the lower leagues, ending up in the Lego Pro Prima Divisione (C1 for you older calcio fans). It hasn't all been bad for them, though, they have made it the Serie A a few times over the years, most recently in 2002/3, when Inter beat them both home and away. Our last meeting in a competitive match (is that the right phrase for a "real" game?) was our home game in that last season. Inter crushed them 4-0 with a double from a baby Bobo Vieri, and great goals from Batistuta and DiBiagio. Really, it was a who's who of early 2000s Inter strikers. 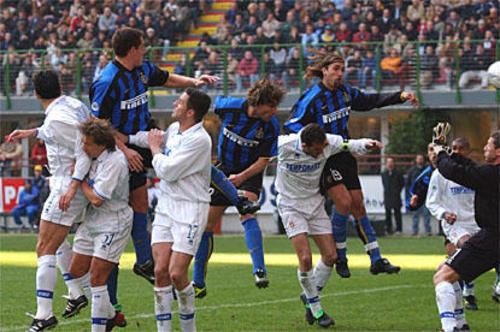 Remember when Bobo was good? Before he descended into skank?

But all that was then. As I said, now Como Calcio firmly reside in Serie C1 (or whatever that preposterously long name is now), finishing last season just above the drop. The town of Como is quite near La Pinetina (closer than Milan, even) so they are a natural match-up for a local friendly. They just finished 0-0 against Tottenham's "development squad," which I guess are youth players. So they should be perfect for us, given that a good portion of our team is 21 or under these days. 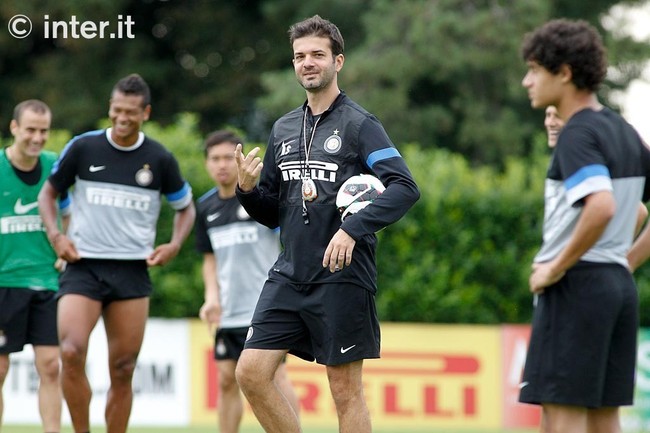 I like to think that Strama is talking about Guarin's ridiculously short shorts here.

No call-up list as of yet, so I suppose everyone who isn’t injured (Stankovic, Obi, Alvarez) or on the way out (Castignos, JC [sniffle], Pazzini, Maicon) will be available. I dont know who from the youth team are training with the first squad, but I do know that there are pictures of guys training who aren’t on the first team list. It's terribly frustrating because I just hate not knowing who they are (grrr). There is some thought that Sneijder will be ready and willing to take the field against Como. Despite all the smoking he supposedly does on vacation, he came back in pretty good shape and has been training well (or so my twitter says). It may also be the Inter debut of Mudingayi. 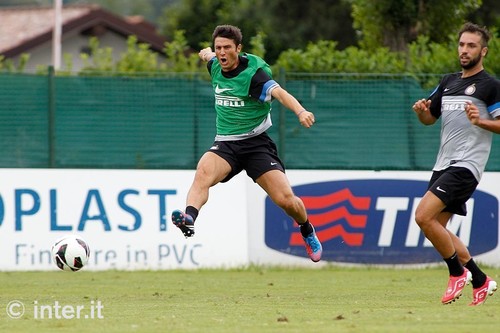 For instance: WHO THE HECK IS THAT ON THE RIGHT???? It has been driving me nuts!

Normally I am ambivalent about friendlies: I understand their necessity but I worry so about injuries as players push themselves to make the first team. This time, though, given our accelerated pre-season schedule, I am all for them. We have Europa League qualifiers less than two weeks away. We will either play Croatian side HNK Hajduk Split or Skonto FC of Latvia. Right now, it is more Hajduk thank Skonto as they have a 2-0 advantage going into the second leg of the qualifier. Either way, these are real teams fighting for their EL lives - these will not be easy games.

I doubt this game will be televised, but you never know. If anyone finds a stream, please post it in the comments below. I will be at work so I am hoping they do the live radio of the game. Dont forget, after this Inter go to Glasgow, Scotland to play Celtic Saturday, July 28 (kick-off 13:30 local time (14:30 CET).

Oh, and congratulations to little Coutinho for winning best player in the Trofeo TIM. Bravo! 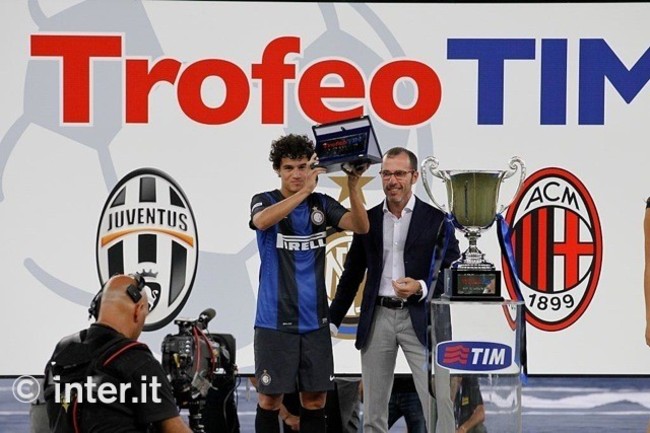