President Massimo Moratti discusses everything Inter, from new ownership, his relationship with the fans and he reveals his Inter XI during the one hour interview on Inter Channel.

Last night, the Inter world was treated to an hour long interview with our beloved president, Massimo Moratti on Inter Channel.  Hosted by the legendary voice of Inter Channel , Roberto Scarpini, Mondo Inter dove into many issues regarding the club, including the impending foreign ownership and what he sees his role will be within this new Inter era. Moratti also discussed various players during his nearly 20 year reign, as well as the current campionato and most importantly, what the fans mean to Inter.

A story that dominated the recent headlines was the sale of Inter's majority shares and the background of the club's future owner, Erick Thohir.  Moving forward with an Asian investor is just another historic and unprecedented move in Italian football, in addition to the progressive nature that reflects the Inter legacy.  Inter was originally founded on the basis of "noi siamo fratelli di mondo," or being "brothers of the world," and bringing in foreign ownership has just reaffirmed this belief.

Moratti touched on not only Thohir, but the deal that fell through with the Chinese investors last year.  The idea of foreign investors became very real in 2012, when a group of Chinese financiers wanted to help build a stadium.  Even though that deal did not come to fruition, according to Moratti, Thohir stepped in with a high level of interest and was "very enthusiastic and has given another market to develop the Inter brand."  He also said that the incoming group has repeatedly asked him to stay on as president, as they live far away and want his guidance.  Moratti made it a point to let the fans know that Thohir is "ambitious, which can only mean good things for the club."  He also believes that after his 18 years at the helm, sometimes fresh faces and ideas are needed. 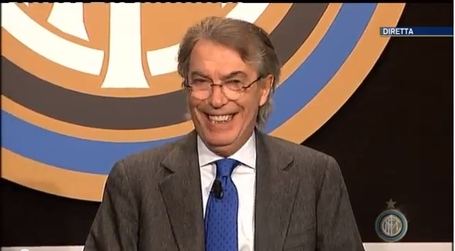 Listening to Moratti talk about some of his players was certainly a highlight, including his recounting of buying Paul Ince.  He said, "When I arrived (after buying Inter), I was advised not to buy any black players because of the Curva.  Instead, I bought Paul Ince.  Inter is a truly unique club, and how did the public react?  So fantastic!  The Englishman was truly loved."

"When I arrived (after buying Inter), I was advised not to buy any black players because of the Curva.  Instead, I bought Paul Ince.  Inter is a truly unique club, and how did the public react?  So fantastic!  The Englishman was truly loved." - Massimo Moratti

The President was also asked who would make his Inter XI, and not including his father's La Grande Inter and his own squad of 2010's Treble, the following players made the list:

The Massimo Moratti XI - Walter Zenga in goal, Brehme and Roberto Carlos as fullbacks, with Ivan Cordoba, Beppe Bergomi, and Passarella in the middle of the defense.  In the midfield, he chose Ince and Lothar Matthaus.  Ronaldo and Zlatan Ibrahimovic were his chosen strikers.  Rounding out his eleven?  It was none other than his favorite, Alvaro Recoba.

Focusing on the current squad, Moratti emphasized the significance of the Senatori and how they have become symbols of Inter due to their important roles in achieving an unprecedented Italian Treble in 2010 and their demonstrated loyalty to the club throughout the years.  While describing Diego Milito's movements, Esteban Cambiasso's professionalism, Walter Samuel leaving him speechless and Javier Zanetti's all-around greatness, Moratti said in an understated fashion... "They will still be very useful."

While the Senatori represent both Inter's past and present, Moratti switched gears and discussed Walter Mazzarri's role in the current Inter setup.  Mazzarri has a wealth of experience and with this comes the ability to establish close relationships with his players.  Moratti described him as a "phenomenal worker" who can have an open dialogue with all of the squad.  Even though the club has been unlucky over the last few games and mistakes have been made on the field, he has no doubt that Mazzarri's work will result in positive performances on the pitch. 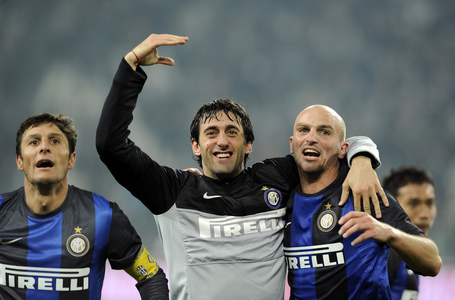 What Interisti appreciate the most about Massimo Moratti is that every one of us can relate to him.  He is Inter's Number One Fan, but through his eyes, "The fans are the true owners of a club. They're the ones who breathe life into it."  Additionally, he continued to thank the fans, saying that it was imperative for the club to have fan support not only during the highs of winning but also through tough times, such as what happened on May 5, 2002.  Moratti said he is indebted to the fans that have supported him through the years, but it is my belief that us Interisti are indebted to him for bringing us a glorious Inter.

President Moratti is one of the finest club owners a fan could ask for. On a personal note, I have had the distinct pleasure of meeting him and honestly, it was one of the greatest and most surreal nights of my life.  After speaking with him and attempting to express my gratitude for what he has accomplished with Inter throughout the years, he surprised me by thanking me for making the trek from Los Angeles to Milano.  The Moratti family is class personified.  The Inter fans are fortunate to have owners who love Inter like only true Interisti throughout the world can comprehend.

Inter's work on and off the pitch embodies the true "Internazionale" spirit whether it is the United Nation's acclaimed Inter Campuses located throughout the world or the merging of Italian and Asian owners, FC Internazionale Milano reflects a global family that connects all Interisti regardless of race, color, religion, or creed. The Inter famiglia is not only an idea but a reality.