The following analysis discusses crucial points to take away from the Inter - Hellas Verona match.

As an Interista, one should be accustomed to the highs and lows of supporting F.C. Internazionale Milano.  In 2010, Inter won the unprecedented treble, a feat that no other Italian club had ever achieved prior to Inter's UEFA Champions League victory on May, 22, 2010.  While there have been many highs in recent years for the Nerazzurri, since that fateful night in 2010, the fortune of "La Beneamata" has been quite unfortunate.  Last season, Inter finished a dismal 9th in the league standings, missing out on both the UEFA Champions and Europa League competitions, and disappointingly ending the season with no trophies to display in their silverware case.  There is no need to look further than this season to see this illustration of highs and lows.

The Nerazzurri began the season in form and won 13 out of 15 points in their first five matches, which inevitably brought about premature Scudetto talk.  Any Scudetto talk was put on hold shortly thereafter, as Inter were able to only earn 2 out of the next possible 9 points.  To say that Inter were in need of a victory at home was an understatement, as supporters were starting to become anxious about their beloved club's recent form.  For many, a victory against the visiting Verona side was necessary to curtail this worrying run of results.

As I read the clever SB Nation Inter-Hellas Verona preview, I was immediately reminded of the unfortunate events of the previous week during the Torino-Inter match, specifically Handanovic's red card.  His expulsion against Torino was immediately felt as Handanovic is arguably the best in form goalkeeper in Serie A.  It also left Inter with a man disadvantage in the early moments of the game that eventually resulted in a draw.  Although a week had passed for many Interisti, the preview piece leading to the Inter-Verona game was quick to point out the obvious exclusion of the starting Inter keeper and whether his absence would have an impact on the game against the visiting side.  Fortunately for the home side, Handanovic's absence as well as questionable officiating calls had no impact on the outcome of the match, as Carrizo provided sufficient goalkeeping coverage in his absence.

While sixth placed Inter were trying to recapture their early season form, newly promoted Hellas Verona stood surprisingly in fourth place in league standings.  The pressing question on Inter manager Walter Mazzarri's mind prior to the match may have centered on whether his injury riddled and recently unlucky squad could rebound from recent lackluster form against Verona and earn three valuable points.  Only two league positions separated the teams but many expected Inter to walk away with the victory.

Fortunately for the Nerazzurri, Alvarez had recovered just in time for the match, much to the relief of Mazzarri, his teammates, and the Inter faithful. From the beginning of Mazzarri's reign at Inter, Alvarez has performed at a level that many had hoped he would since his acquisition in 2011. The creative attacking midfielder seemed to have blossomed under the new Inter manager's mentorship.  His presence had an immediate impact on the match early on, as Alvarez was highly active in both offensive attack and defensive coverage.  While Alvarez was available to play, Campagnaro was still injured, and the squad looks likely to have to cope without his defensive presence for another projected 3 matches.

Although Campagnaro's acquisition for Inter was not a highly sensationalized move, he has proven to play an important role in the defense.  As a leader in the backline, he has brought a calming influence in Mazzarri's defensive formation, as the "Wall," (Walter Samuel) is still recovering from a long-term injury.  In Campagnaro's absence, Rolando stepped in on the right side of defense, and with the help of Jonathan and Cambiasso holding their midfield presence in front of him, they were able to hold off the infrequent, yet at times, dangerous Verona attack, led by the veteran goal scorer, Luca Toni.

Prior to the game, a much anticipated midfield battle between Inter's Wonder Boys, Mateo Kovacic and Ricky Alvarez and the Hellas Verona Dynamic Duo of Juan Iturbe and Jorginho would be on display.  The contribution of the talented Iturbe and Jorginho, more specifically the roles they played in ensuring Verona's success thus far into the season had stirred the interest from many clubs, including Inter, their city rivals, Milan, Tuscan side, Fiorentina, as well as English clubs, Chelsea and Arsenal. 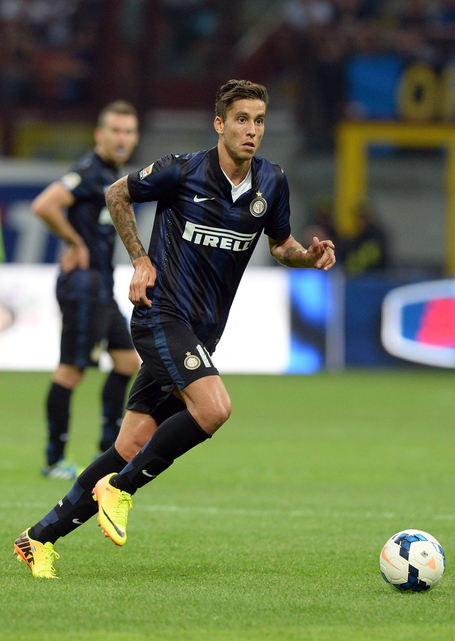 As previously stated, Alvarez was a key part of the Inter offense. While Alvarez has been a crucial player in Mazzarri's attack, Kovacic has struggled with injuries since this past summer.  This was one of the few chances that Kovacic has been available to play and many fans were excited about watching the midfield duo finally play together.  While many may have hoped to have seen Kovacic and Alvarez play side by side, due to Mazzarri's favored formation of a 3-5-2 or 3-5-1-1, both players would rotate up front, sliding into attack and then defense, to ensure proper defensive coverage in the back.  Alvarez mostly slotted up front for the majority of the match, while Kovacic did receive a few opportunities to play further up the field as the game wore on. Unfortunately, the young, talented Kovacic seems to continue to struggle with fitness and is currently being monitored for muscular groin problems and yesterday underwent a warm down session.

Alvarez was everywhere on the pitch as he assisted both in offensive attacking and defensive duties. Fredy Guarin played well and seems to perform best when up front in attack, as both he and Alvarez have been successful in finding goal scorer extraordinaire, Rodrigo Palacio.

The potential midfield battle turned out to be more hype than actuality, as Iturbe and Jorginho had few touches on the ball as Mazzarri's men dominated possession for most of the match. 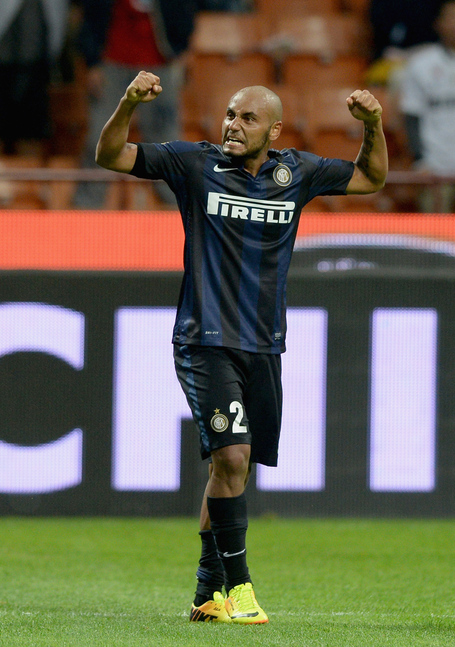 Ultimately, the victory would be the confidence booster needed to turn around the stagnant form of the Nerazzurri.  The match allowed Inter to reestablish its winning ways showing a marked improvement in organization and defense and an intentionally mindful strategy in attack. Now looking forward to the next match against Atalanta, it is imperative that Inter continue this form and build upon Mazzarri's vision of his new Inter.