Inter share the points with Atalanta in their Week 10 fixture.

Round 10 of Serie A kicked off with Inter visiting nearby Bergamo and the always tricky Atalanta.  As Max De Luca pointed out in his preview, the Milan based Nerazzurri have failed to beat the Bergamo based Nerazzurri on their home ground in five seasons.  Coming into this match, Inter did not have many attacking options available, with Rodrigo Palacio and Mauro Icardi as the only two strikers available for selection.  Although the strike force was depleted due to injuries (Diego Milito) and suspensions (Ishak Belfodil), the defense was bolstered with the long awaited return of Walter "The Wall" Samuel.

With Halloween two days away, it was imperative that this trip to the Atleti Azzurri d'Italia did not turn into a House of Horrors.

*Note: All mentions of "Nerazzurri" after this point will refer to Inter.

The weather, atmosphere, and home team, Atalanta, gave this match the perfect conditions for Inter to slip on a proverbial banana peel.

The biggest news of the night surely had to be Samuel's return into the backline, and his presence was felt immediately as he tackled Marko Livaja, who happens to be co-owned by Inter.  Having "The Wall" back sent a sense of reassurance in the defense, which had been susceptible over the last few games.  Samuel had a couple of important interceptions early on, but not as crucial as Fredy Guarin's header off the line in the 10th minute, which denied Atalanta an early goal.

Despite the early scare, Inter were playing well and soon took advantage of Atalanta's inability to score.  In the 16th minute, Ricky Alvarez placed the ball into the back of Consigli's net after some beautiful teamwork from his cohorts in attack.  Kovacic crossed the ball into the home side's penalty box, which found Palacio.  Palacio, in turn, headed the ball down into the path of Alvarez and Inter were up by one.

Unfortunately, the lead would not last long.  Right after the goal, Atalanta attacked relentlessly and was undoubtedly helped by the fact that Samir Handanovic appeared to have injured his midsection after a goal kick.  Yepes was close to equalizing for the home side with a free header shortly after Inter's goal, but it was German Denis who afflicted Inter yet again.  In the 25th minute, "El Tanque" buried home a solid header, out jumping Samuel to tie the game at 1-1.  Denis has an incredible goal scoring record against the Milan side, scoring an astounding seven times against Inter in only four matches.

The rest of the first half was relatively even, although Nagatomo hit the post in the 41st minute at an impossible angle.  Atalanta, at times, had seven players in defense to guard against the attack of Kovacic, Alvarez, and Palacio.  Rizzoli blew the whistle at the 45 minute mark, with no added time to be played. 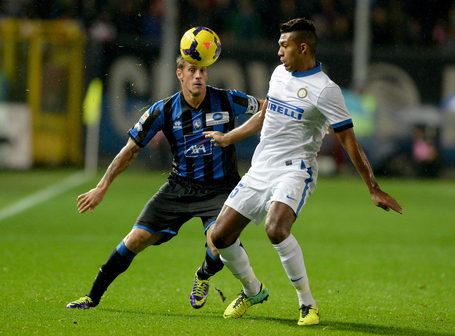 The second half started with a major blow to Inter, as Handanovic was replaced by backup goalkeeper Juan Pablo Carrizo.  As previously mentioned, Handanovic injured his torso during the first half but according to reports after the match, it was not serious and he should be available for the Nerazzurri's next match.

There was a slight let down in intensity from both sides after the interval, as surely the cold rain dampened the energy on the pitch.  Players on both sides were slipping due to the slick surface, although Cigarini happened to fall inside Inter's penalty box while looking for a free gift from the referee.

While both sides looked tired, it was the away side that conjured up a few chances to give themselves the lead.  Samuel was pulled down by Yepes in the 53rd minute during a corner, but it was not spotted by any of the officials.  Palacio slotted the ball into their goal, but was called offside in the 60th minute.  Soon thereafter, Alvarez weaved his way through the Atalanta defense with some smooth moves but could not convert from his weaker, right foot.

The goal saving Guarin was replaced by Icardi in the 66th, but Captain Cambiasso took over the role of goal saver in the 68th as he also headed an Atalanta shot off the line.

Palacio was once again in the thick of things on the offensive side, as he headed forward a ball that Icardi received and nearly scored on.  The thundering shot of his left foot shook the Atalanta woodwork and the home side was lucky not to have been down a goal.

Inter were fortunate to not be a goal down themselves when Yepes found the ball at his feet in front of goal in the 82nd minute.  The Atalanta defender shot the ball straight at Carrizo, who pulled off a terrific save with his feet to spare the Nerazzurri.

From that point on, any chances at goal were from the visitors.  Icardi went down in the box in the 84th minute with what looked to be a penalty, but of course, was not given.  Alvarez took a fantastic shot at goal from outside the penalty area which flew just wide of the post.  Palacio had the match's last real chance but tired legs prevailed in the end as the defenders were able to take the ball away in Atalanta's box.

After the three minutes of added time were up, Rizzoli called the game and Inter left with a hard earned point.

The next round takes Inter to the Friuli for another tough match, this time to face the always difficult Udinese and their talismanic striker, Antonio di Natale.

*It is also interesting to note that Inter have NOT been awarded a penalty this season.