The elder Nerazzurri fend off the visiting "baby" Nerazzurri and company as Inter walk away with a victory versus Livorno.

The buildup leading into today's match was that of the Nerazzurri versus the "baby Nerazzurri" as four Livorno players are currently loaned Inter youth products. After an away victory against Udinese, could Walter Mazzarri's men continue their winning ways? That question would be answered on the pitch as Inter hoped to defeat the visiting Livorno side and walk away with three points and a chance to close the gap to only a three point differential to third placed Juventus ahead of their rival's match tomorrow against second placed Napoli.

Match Summary:
The match began with away side Livorno kicking off facing Mazzarri's 3-5-1-1 formation. Inter lined up with Handanovic in goal, a three man back line with Rolando in the center while Ranocchia and Samuel played on the right and left of him respectively. In front of the three center backs were a midfield formation of Jonathan, Taider, Cambiasso, Alvarez, and Nagatomo. Guarin played in the trequartista role behind striker Palacio.

Inter started the match with possession allowing play to build from the back. Nagatomo ran down the left flank in an attacking manner and tried to move past the Livorno defender with a beautiful move in the 6th minute but unfortunately it went out of play resulting in a goal kick. Both Alvarez and Nagatomo continued the attack down the left side while Cambiasso and Guarin tried several times centrally in the first 15 minutes of the match to connect for goal but were also unsuccessful.

Leading the Inter attack was Palacio who was a bit too aggressive as he was caught offside three times in the first 15 minutes. Conversely a striker caught offside is also a good sign reflecting their readiness to attack and to hopefully capitalize on a defender's mistake.

In the 15th minute, Cambiasso seemed to suffer an injury as a Livorno player's shoulder hit him in the head leaving him a bit dazed and confused as he came off the pitch after the medical staff evaluated him for a few minutes. Meanwhile, Kuzmanovic warmed up on the sidelines in case Cambiasso could not play on. Fortunately for La Beneamata, the midfield general could soldier on as he came back onto the pitch a little worse for wear to carry out the directions of Inter boss Mazzarri.

The relentless pressure from the Nerazzurri continued as a strike towards goal in the 21st minute was averted by loaned Inter player, Bardi, the starting Livorno keeper.

Another Inter player on loan at Livorno, Duncan, fouled Alvarez in the 21st minute as he clearly caught the Inter player from the back in the top of the Livorno box. Unfortunately the official did not see the foul and let play continue on. Duncan was finally given a yellow card for a hard tackle against Inter player Taider in the 24th minute.

Bardi was kept busy as the Nerazzurri attack peppered the away side's goal with several attempts in the 26th and 28th minutes. To help Bardi in goal, the Livorno midfield tried to muscle Inter off the ball but to no avail.

Finally after dominating ball possession and countless attacks on goal, Inter got onto the score sheet from a Jonathan cross which was fumbled by Bardi for an own goal in the 30th minute of play.

To counter the Inter goal, Livorno's Paulinho tried a strike for goal himself which landed safely in Inter goalkeeper Handanovic's arms.

Luci attempted to go for goal in the 38th minute but it went wide for Livorno.

The build up from the Inter back line in the 41st minute connected with Cambiasso and Palacio and although beautiful the header was high, just shy of goal. Other well-organized attacks involving Alvarez, Nagatomo, Cambiasso, and Rolando elicited saves from Bardi.

Inter pressed and easily dominated possession in the first half. Mazzarri and his men were organized and performed well resulting in a deserved one goal lead at the break. Surely, the Nerazzurri would need to score another goal or two to seal a victory at home. 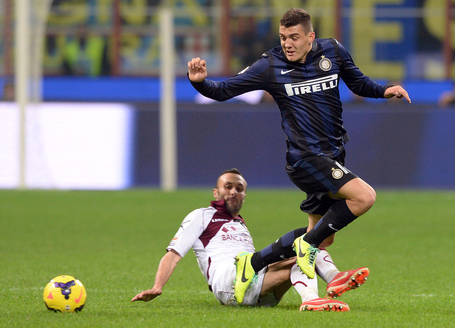 The second half began with Inter kicking off and maintaining possession of the ball in the first few minutes. A halftime substitution by the away side was completed as another Inter player loaned to Livorno, midfielder Benassi was swapped for Duncan who carried a yellow card from the first half.

Livorno began to build pressure with their attack and Inter once again started to drift farther back into their defensive third. The Nerazzurri seemed to be content to sit back and counter attack rather than keep possession of the ball as they did in the first half. It would be imperative for the home side to refocus and score a goal to counter the Livorno increasing pressure.

In the 13th minute of the second half, Mazzarri made a change to try and awaken his men on the pitch. Alvarez was subbed for Kovacic who initially played alongside Cambiasso deeper in the formation but then eventually pushed further up the pitch to help in attack. It is not certain if Alvarez was subbed due to an injury as it seemed that the medical staff were icing his knee down and taping it up after he exited the game.

The Inter players took their opportunities in offense as Samuel headed the ball high in the 19th minute, followed by a spectacular cross by Nagatomo in the 20th minute that necessitated an amazing save by the now redeemed goalkeeper, Bardi.

Inter youth player on loan at Livorno, Mbaye created some difficulty on the right side of the opposition's attack showing some of the promise and potential that has been buzzing about him. Livorno continued to attack with Benassi trying to score but a perfectly timed challenge from Samuel negated any chance at goal in the 22nd minute.

Livorno tried to convert a free kick from a Taider foul in the 25th minute but it was hit high above goal.

Guarin was subbed in the 26th minute of the second half for youngster Belfodil with some rare minutes off the bench as Walter Mazzarri tried to inject some life into his lifeless offensive attack.

Rolando took a page out of Samuel's book and also intercepted an important ball in the 28th minute as Livorno continued to attack. The Inter back line held strong as Paulinho was called for a hand ball in the 29th minute which resulted in a yellow card for the Livorno player. Paulinho tried again with a header that went high above goal in the 30th minute. Livorno continued to apply offensive pressure to the lagging Inter side.

The possession changed between the two sides with Ranocchia heading the ball towards goal in the 32nd minute resulting in an easy save by Bardi and Paulinho countering with an attempt that shot high in the 35th minute.

Time seemed to stand still as Javier Zanetti came on as a substitute in the 37th minute for Taider. A standing ovation from the entire stadium erupted as Pupi entered the pitch. It was an emotional moment that left everyone awe inspired as it had been a little over six months since "El Tractor" had stepped onto the pitch in a competitive fashion due to a horrific Achilles injury.   In the 40th minute, Zanetti flew down the left side in one of his trademark runs and attempted to connect with Nagatomo for an attempt at goal.

As Jonathan sustained an injury that saw him get carried off the pitch Pupi slotted back on the right of defense with Palacio tracking back to help. The Nerazzurri were guilty of some desperate defending as they tried to hold onto their one goal lead.

An emotionally charged goal in the 45th minute originated from the Inter captain as Zanetti charged down the center of the pitch finding Kovacic who created a bit of wizardry with his feet to find Nagatomo who slotted it home for goal sealing the victory for the black and blue. Pupi was at the center of the buildup for goal as well as the adulation surrounding the joyous celebrations as Inter's captain was finally back.

While the Nerazzurri started out strong in the first half thus creating countless opportunities that eventually led to a defensive own goal by Bardi, the second half was less than a desirable performance for the black and blue. Although the second half was not the best performance that has been witnessed by the Inter faithful, the return of Javier Zanetti after such a devastating Achilles injury, was the highlight of the match that left everyone feeling a bit inspired.

Inter secure their fourth place in league standings and successfully close the gap on third placed Juventus, drawing within three points as Inter stand at 25 points and Juventus at 28 points. Mazzarri's men continue their march up the league table albeit with a somewhat flat performance.