Inter’s 2-0 home win against Cluj was something of a Pyrrhic victory. The battle was won on many levels. It was a successful debut for the young Kovacic. The 4 man backfield – with Silvestre turning in a very meh performance – had another successful outing. But the team suffered another setback this season as Milito was lost for the season with a horrific knee injury.

And let’s not sugar coat the injury. It’s bad. Inter doctors have said it’s not career threatening… but it is. Milito may very well return to be a professional football player but there is no guarantee that he will return to the caliber that he was or that this team needs him to be, especially considering his age. I don’t know Milito personally, of course, but the personality that shines through the windows to his character that we all get on gameday suggests that he’ll work hard to rehab and everything. But there is just no guarantee.

From what I can read in the quick response to the injury from the team’s perspective suggest that Livaja’s going to Atalanta this winter will prove to be decisive somehow but I disagree. Would Livaja have even taken Milito’s place as the lone striker? I think that’s a debatable point. More likely Palacio and Cassano will divide the forward duties just as they did when Milito was injured the first time around. Besides, the way things are looking now, the shift to the 433 and its variations – 4231, 4321 - is here to stay for the immediate future at least. Likewise, I can’t really see the management trying to panic buy a free agent. And here’s why – I can’t imagine a free agent agreeing to any low cost contract that ends this July and the management won’t want to be shackled to anyone they panic buy for the long term.

So the team will be left with Cassano, Palacio, Rocchi, Alvarez and any youth team player they decide to move up, but I wouldn’t hold my breath on the last one – and I would be if we were that desperate. The team is going to try to continue the fight for 3rd and a youth player at his point with Livaja and Longo gone is going to be just out of diapers. Will this make the 3rd place race impossible? No, not impossible, but it will make it harder to a team that already has a small margin of error; so short term, yeah this injury could be a big deal. However, I think that the team was already going to invest a lot of money in a forward this summer anyway and it was already going to bring back Longo anyway… I don’t see this as being a huge impediment to the team, long term.

Having said all that, from an ACL surgery recipient, I hope he gets better soon. He’s a class individual, a legend of the team and a truly overlooked player and I am always thankful that I had the pleasure of watching him score the 4 goals in May that secured this team’s Treble.

Moving on to the game…

It was a similar Inter we saw on Thursday that showed up last weekend – as far as the general shape and covering went. There appeared to have been some squad rotation in mind for this tie. The formation also changed a few times. It seemed that Inter started out with a 4312 with Guarin as the AM in the middle behind Palacio and Cassano. Then when Alvarez came on it looked to me more of a 4321 with Ricky and Fredy as the AMs. Lastly when Jonathan came on, Fredy appeared to have dropped back and the team seemed to have morphed into a 442 to cover the final minutes.

The best part of this game, for the Inter supporter was that the covering looked a little sharper – minus Silvestre, perhaps. Gargano continued to impress, maybe less so than against Chievo, unshackled from the responsibilities of the central midfielder and freer to roam and harry on his side of the field. His new role was more as the bodyguard for the CM, patrolling his area. Cambiasso looked good doing the same as well as being a real time coach on the field for the youngster.

Speaking of the youngster, he looked very comfortable taking the responsibility of knitting the strata of the team on the field together. He made himself available as an outlet and was very active in midfield maintaining possession. And like with Kuzmanovic, this looked a completely different team than the one that showed up with sketchy midfield passing. It’s not the quantity of possession that we are seeing that’s really the difference, it’s the quality. If there is a turnover, it seems like its happening further up the field. And I don’t know if it’s the slightly different role of the two flanking midfielders or what, but with the new scheme/midfield roles more people seem to be in a better position to slow the ball down so that others can come back to defend. Inter’s "transition defense", if you will, has looked improved.

On attack, it’s just a matter of putting the ball in the net. We make chances – it seems like every game we make our share – but, on this day we put them away. And this is where we lose ground with Milito’s absence. He’s so much more clinical than anyone else we have on the roster. Against Cluj Palacio put his chances away. Just for the record, Palacio is on pace to having incredible Europa League stats by the time this is all over. Really, he’s having a good including his League stats as well. He’s just not a striker… he needs that other person to interact with to play his game. Inter can probably fudge it for a while and against lesser defenses. But with the bigger teams with better players in the back, it will be more obvious that this team is lacking something in the final third. The trick is to see how long we can disguise that lack and can we overshadow it with superiority in another area. No one said that this would be an easy job Andrea… 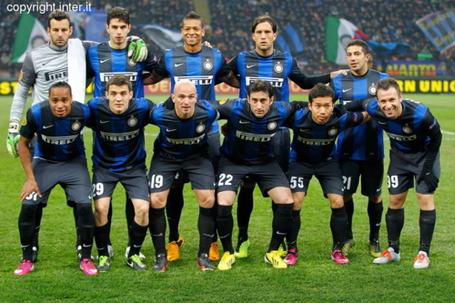