Ok, so this is our first game without Milito. He has missed some games before, but this is different. This is OUT - all in capitals. This is game one with Tommasso Rocchi as only other option (YIKES!!!!!). I guess this will be our first real test, our first chance to see if this New Look Inter is viable or if Branca and his minions will have to hit the free agent market after all (Van Nistelrooy? facepalm). This game is pivotal for our hopes of playing our midweek games on Tuesday or Wednesday next year instead of this Thursday ghetto we are stuck in now. This is where the rubber meets the pavement and we see what our squad is really made of. (What, too melodramatic? Or just rousing enough?)

What: My Least Favorite Match of the Season
Where: Lovely Florence (if you can see past all the drunk American students laying passed out on the streets, that is)
When: Too soon, too soon (Sunday, 8:45pm locally, 11:45am pacific, 2:45pm eastern)
How to Watch: Live on RAI International or these channels. You can find a stream (try here) or watch a rebroadcast on beIN Espanol at 2pm pacific, 5pm eastern (curse you beIN!!!)


Serie A, away stats:

As we can see, statistics are not on our side for this tie. Even so, Inter has managed at least a point from the Artemio Franchi since February 2006. We have had six away games since that loss and Inter has won three and drawn the other three. Last season was one of those draws. The game finished 0-0 in a strangely spectacular fashion: JC (sigh) took down Lazzari then saved the resulting penalty (double sigh). In the end, this was probably the game where we realized that there would be no champions league this year. That dream was over.

I dont know how much I have to say here. I am sure that Slakas will get something up over on the Fiorentina board. They sit right behind us in the standings (where we have dropped to FIFTH!!!) with 39 points. They have only lost one game at home this season (ugh) and have scored almost three times as many goals as they have allowed (24 for, 9 allowed). Double Ugh.

Jovetic and Toni have built an impressive goal record between them (9 and 7 respectively), while Gonzalo and Aquilani are no slouches either (5 and 4). Viviano seems to have recovered nicely from his injury and is making a good show of things. Even more troubling, our old friend David Pizarro is having a renaissance of form and new purchase Momo Sissoko is available and on their squad list. The more I type the more nervous I am getting.

La Gazzetta thinks we will see something like thos tomorrow: 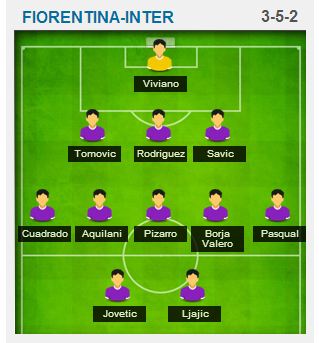 And it scares the living bejeezus out of me.

Are you terrified yet? Cause I am. Let's see, Castellazzi, Samuel, Gabby, Obi, Milito (sniff), and Chivu are injured. Deki is still not 100% so was left home (he really really wants the derby). I suspect that many of the players we saw on Thursday will suit up today as well. Luckily, most of those players are the younger ones so maybe it will be ok. Cassano was a little winded towards the end of the Cluj game, though, and we really need him now (oh boy, do we need him).

Which brings me to the question of signing someone to replace Milito (awkwardly, I know, but we are here now and that's all that matters). There has been all sorts of speculation in the press on this subject. They, like me, look at our roster list and see that we have a horrifying dearth of forwards. Now, FIFA doesn't allow us to sign anyone who isn't a free agent, which means the pool is very shallow, shall we say. Ankle deep, even. Mostly, they are bigger-named has-beens (Van Nistelrooy) and almost has-beens (Henry). For his part, Strama has categorically denied that Inter are thinking hitting the market, saying:

"As the coach of this team, I exclude that option. Obviously it's part of Branca's and Ausilio's jobs to keep tabs on the situation regarding free agents, but no names have been put to me. As things stand, I can exclude the possibility of us signing anyone."

He seems pretty determined to look to the Primavera to fill the ranks. As such, Strama has pulled Colombi from the Viareggio Tournament (aka, the Carnival Cup) to travel with us to Florence. I am sure the kid is happy to come but Bernazzani might be a bit miffed. The boy got two goals against Melbourne just yesterday (Inter are unbeaten in their group and will go on to the quarter finals) but I dont think he has trained with the first team before and he only has one goal for the league. Talk about trial by fire.

Fiore lost against Juve last weekend. By all accounts, it was a gutting loss and now the fans would like nothing better than for the Viola to take all their angst and frustration out on our poor Inter. Not physically, of course, but the Fiorentina fans want a win, and a big win at that. This is going to be a terribly difficult game. In a lot of ways, this game holds Inter's fate in its hands much as it did last season. A loss has us staring Europa League 2013/14 right in the face while a win keeps our CL hopes alive. Strama agrees, saying:

"I can say this with complete confidence: the Stadio Franchi is one of the toughest grounds to go to this season. None of the big teams have managed to win there and they've all struggled. It's a real six-pointer tomorrow, there are only four points between us and Fiorentina. It's going to be extremely tough."

I am hoping against hope that the squad will rally and get a full three points out of this match. I dont think that I have hidden the fact that I like Fiorentina very much and on any other day I would be cheering for them to win. For this game, though, my loyalties are 100% on the side of the Nerazzurri, 100% on the side of the righteous, 100% on the the side o all that is good and right in the world. I hope that the squad can find that extra something special, can tap those deep reserves, and find it in themselves to win. And with that win, we Inter fans can keep on dreaming. Well, at least until next weekend, but that is a whole week away and we can cross that derby bridge when we get there.

I bet you dollars to donuts (or euros to cornetti) that Zanetti is singing here. He just cant help himself. 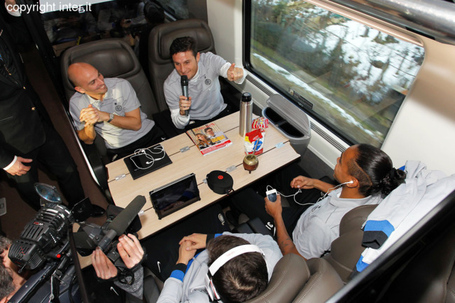