Don't expect too much analysis here. Mostly because it isn't needed. The team got creamed 4-1 away to a very good Fiorentina team that is right behind us in the standings. It was a total team loss from the very top to the very bottom. What shouldn't get lost is how good Fiorentina were. It was a deserved thrashing. All that we Inter supporters can do right now is blame someone and rant.

The most intelligent thing I have read regarding this loss against Fiorentina is that it was a total team loss. From the management who seemed to have planned poorly for several years in readying the team for post-success/post-FFP future to the medical staff who can’t keep players on the field – like Obi, what the hell happened to Joel Obi? Wouldn't a player like that have been very useful for this team today? - to the coach who obviously misunderstood the effects of midweek Europa on this team, to the players who allowed themselves to be embarrassed.

But that is something that we aren't going to complain about as fans. We are going to blame either A.) The Coach or B.) The Players or C.) Both. The LiveBlog, and shame on you if you weren't involved, revealed a lot about what this particular community regards as the most deserving of criticism.

First of all, the LiveBlog revealed that there are a massive amount of masochists masquerading as supporters. There is a little indicator in the corner of my interface with the number of people who are reading the comments on the screen and that number – as well as the number of people contributing to the criticizing – went up as the game went on. So I am going to give all of you a laurel, and hearty handshake for being die hard fans that didn't wilt when the going got tough. So, go ahead and break your own arm off patting yourself on your back.

Second of all, the LiveBlog revealed that most of you blame Strama for how poorly the game went or for the fact that we are not in the Champions League spot right now. I am not really sure which of those two crimes are worse, really. My first instinct is to not blame the coach, especially if I don’t think the team is up to snuff – and I don’t, but I’ll get into that later. I want to make sure that the active LiveBlog Strama-Haters get their points a fair airing out for anyone else that might be perusing this Blog for the first time. By the way, if you are an Inter supporter and you don’t feel that your point of view on how things are going in isn't getting a fair amount of discussion from me or anyone else… guess what? It’s your own fault for not participating in stuff like the LiveBlogs. Squeaky wheels get the grease, my friends. Or is that replaced? Either way, be squeaky and something will happen.

Anyhoo, there are those who feel that this debacle that we witnessed today was Strama’s fault. And frankly, I agree. Well, I agree in part, anyway. Strama certainly blames himself,

"I think it's clear what happened today. Regardless of the merits of our opponents, I think we paid for the Europa League match in midweek. Probably I myself hadn’t imagined what would happen after having played two games with the same players. And, while being able to foresee it, I never imagined we would have paid so dearly. When you’re always a step late to the ball… my lads looked very tired to me. Again, this all comes from my assessment, and I never thought we would have paid for it so much."

And so do In retrospect, playing nearly the same group who played against Chievo and also against Cluj was a mistake. And personnel choices are definitely in the realm of the coach. And I want to be clear on this so I will repeat again – making the wrong assessment on the team’s fitness was clearly and obviously his failure in planning for this game. I agree with the criticisms leveled at Strama on this point.

However, the criticisms on Strama were often expanded onto blaming him for this season’s failures and for that I do not agree. This is basically because I don’t see a failure in this season, yet. It may very well be that Inter will not make the Champions League – and I know that there are those who see this as a failure. Will this be a failure of the coach as well? Considering where this team was last season, and the season before that pre-Leonardo, I do not consider missing the Champions League a failure. I actually consider a Champions League place with this current team, even before Milito nearly snapped his knee off, too far an accomplishment with the group currently in place.

Moratti might disagree with me however, and as we all are aware Moratti’s opinion – though completely wrong if he does disagree with me, as far as I am concerned – matters much more in practice. The open secret among the Italian football intelligentsia - if that isn't a oxymoron, I never heard one - in is that if Strama doesn't make the Champions League this season, then Moratti will sack him and hire Walter Mazzarri. Clever people will note that Mazzarri hasn't signed any sort of contract extension with yet, even though his contract runs out this summer. Walter Mazzarri is a fine coach and Samp and teams have been very professionally run, but I personally do not care for him too much. If that’s okay with you, fine. And no, let’s stop this rumor right here; he won’t be bringing Cavani with him.

So if you are one of those who didn't like the 3 man defense or Mazzarri’s teeth grinding post-game press conferences, don’t say that you haven’t been warned. I will say this in Mazzarri’s favor however, he certainly has the personality and experience to hold his own against Moratti, Branca and Ausilio. Will this work in his favor or…?

Why do I feel like I am channeling a former Inter.theoffside blogger with the above subheading? For the 3 of you who got that reference, yay. For the dozens of you who have no idea what’s going on… well, that’s actually more like the reception to my humor that I am used to.

I later learned what Samp was asking for Poli and frankly, I wouldn't have paid it either. But such lengths and negotiations were used to acquire a player like Schelotto that I wonder if the same couldn't have been done for Poli. And we need a player like Poli like we needed a player like Thiago Motta - even though both covered different tactical roles. In other words, he’s a bit of a dick that puts a more physical edge to the team. We need someone to remind others that this is a contact sport. To rough up the other team’s fancy dance player like other teams do to Cassano. A player like Jovetic needs to be thinking about more than just dribbling past players when he advances to Inter’s back-line. It sounds harsh, but being tough on the skill guys is part of the game. People complain about Coutinho leaving, but wait until the EPL learns that he flinches when defenders go tough on him. He’ll have to learn or leave there, too.

And it’s not just player acquisition, its player release. Cambiasso and Javier both looked raring to go in September, but more recently look like they are moving in molasses. Cambiasso took a short break recently and looked much better for a couple of games, but I have never seen Javier look so bad. How many runs forward did he make today? Fior pressed him and he dished the ball rather than dribble around anyone or fire up the team with an individual effort that dragged the team onward. Does that sound like Javier? And he was beaten with speed too, but I think we all know that he’s had that weakness for a while now.

And here’s the only thing that really bothers me about this game; where were these senators stepping up and being leaders when we need them to be? Supposedly we are keeping these guys around to be the leaders of the young and just arrived, to give folks a reference point. But in a game like this, I expect these 2 guys to do something… anything… other than passively watch it happen. Look, the team is going to lose games here and there. Strama, any coach really, is going to make his mistakes – even "Mr. Vain" Conte admits to making a mistake yesterday – but the players should have some pride to not lose like this. There should be team leaders who won’t stand for this kind of embarrassment. No dressing down a coach can give you is worse than your highly respected teammate chewing your ass off in front of a crowd of people and everyone in a hundred miles knows that you deserve it. If 32 year old Cuchu and 39 year old Zanetti can’t play effectively after December 1st or be team leaders then what are they doing there?

Does that last paragraph sound too harsh? Does that sound too disrespectful to players who have given so much to the club? I’m sorry about that, I love those guys, but I am very disappointed in them right now. And 10 years from now, I want to continue to love them. I want to remember them for the insane trophy haul they led the team to, and not for staying on too long and causing problems as we all try to move into the future. This team had four games this season in which 3 goals were given up and this is our first 4 goal conceded game. Some of you are saying that it’s Strama’s system – and you might be right. But if he’s so bad, there doesn't seem to be a logical answer for why he’s still doing better in every competition the team is in this year than the previous 4 coaches have done at this point in their respective seasons. And he’s doing it with much lesser talent and significantly lesser payroll, besides. I think it’s a lack of talent – especially at the forward position, positions being undermanned and a lack of toughness/leadership at the squad level.

I can’t wait to see how we go forward from here. 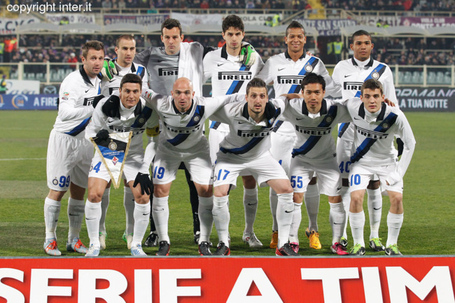