It was another tough outing – on several levels – for the Boys in Blue and Black as they lost away 3-1 to relegation battler Siena. Not only was it another set of 3 points lost to the bottom of the table, but the famous itchy trigger finger of the President, and the club supporters, is now under scrutiny.

There was a lot of bad in this game so let’s not tarry, shall we?

1. The right side of the team needs to be figured out, but this might be a case of playing the new boy before he was ready. At the time that I found out that Schelotto was to be starting I didn’t think anything of it. Looking back, playing Pereira and Naga would have been a better choice at this moment. I get that there is fan pressure to not play , but he never looked as out of position as Schelotto did on Sunday. Plus, there is a reason that fans aren’t employed by teams. I also get that patience around this thing about the wide players is running out, but this might have been a case of better safe than sorry.

2. Javier in the midfield. The first goal was offside – plus, reading the papers today I am given to understand that the whole series of events that led to that first goal started with a Siena handling in their own area – but the ball went through Javiers’ legs to the guy he was supposed to be running with down the center. No one is perfect, but the last 2 years have shown signs of wear and this has not been a banner year for the nearly 40 year old, and I don’t think that it’s going to get better the closer he gets to the actual day the odometer on his dashboard flips all the dials.

3. The management’s handling of Strama. I don’t care if there is starting to be some nervousness around Strama from the fan base. As I said, there is a reason that the fanbase isn’t in charge of a club – and I include myself in this, of course. But I expect better from the people who actually run the show and I try to give them the benefit of the doubt. But my patience is running thin right now.

See as far as I see it, the management put themselves in the position to "evaluate" Strama in the first place after swinging and missing on Benitez, Ranieri, Gasperini and Leo since Mourinho. Neither Benitez nor Ranieri nor Gasperini despite considerably bigger reputations in the biz could make Inter more competitive with a significantly more "talented" roster than Strama has been able to field. And Leo had only barely managed to hold things together with string and bailing wire that was rapidly coming apart right at the end of the season. Strama has outperformed them all. So, if they "evaluate" things - and the minute they start you know it’s going to happen it has so often before – then who are they going to get to replace him? Losing to twice is bad, I said it would be and it is. But when I look at how this club got to this point from Sept to Feb I don’t see Strama as being the source for distraction or bad results. And his players continued to fight on Sunday – they didn’t give up even though they have to know that they don’t have the quality on the roster to overcome two scorching pieces of bad fortune. By the way, he hasn’t been in charge of player acquisition for these last two sucky transfer seasons.

For 2 years now, the management has been selling attacking players without replacing them. For 2 years now the management has been hiring and firing coaches at the first hint of trouble constantly putting he club in reset mode. At some point you have to stop and fill out the damn team and give someone a real chance, goddam it. Strama has done nothing but work with the club, despite not getting the players he wants or able to play the formations that he wants. He’s been adaptable and positive throughout, even despite the crazy parts with the refs who make mistakes or the management who decided that October was the best time to start a contract war with the highest profile player on the team.

Through the whole ordeal that this season became he’s been a reference point for the team. You can tell because they do what he says even when you are losing 3-1, he takes their blame for a bad game like this and they come out to risk their reputation to speak on his behalf. That’s not the guy you fire. The asshole who made the team less talented, the environment less reliable and the starting lineup less about merit is the guy you fire.

There were two unfortunate situations that the team had to fight back from, but you have to ask yourselves where the goals were going to come from to make a comeback? And then we get to the chilling part – there isn’t a player to make the goals… there isn’t even a player to link the passing from the defense to the attack to create a scoring situation for that player who can score, if we had such a player, on the team in the first place.

And none of that is Strama’s fault. And it’s not like I’m the guy’s brother-in-law, either. It makes me angry to see the club continue to fart around with the managers as though it’s going to solve anything or as though they know what they are doing. Strama had the directive to be competitive and make the Champions League. He might not make the Champions League, but he has been as competitive as it is possible to be with this team that is flawed – as I have said on several occasions. So if there is a "BAD" for this game, the biggest one is the management that still won’t admit the most basic of issues – For several years they have completely misunderstood the talent on this team and they have absolutely no idea what kind of coach they want to lead the very mediocre team they have fashioned from the greatness they once held in their hand.

The reason they don’t know what kind of leader they want is because there is a startling lack of leadership higher up the strata of the club. This team needs a leader.

The ugliest part of this game was just the lack of a second option. When it all went blooey there wasn’t any hope of scoring another goal. Cassano made his goal of the night and Palacio, bless his heart, worked hard but he gets lost when he tries to do his business inside the area and is the sole focus for the entire defense. That’s not what he does best and he doesn’t look great trying to work out of character. With Milito down and Livaja sent away just days prior there isn’t anyone with the muscle, the skills or the quick thinking to work in those tight areas. Frankly, it’s not what Livaja does best either, but at least he can fake it better than Palacio.

Despite all the crap that the team is going through and had gone through, it still fights. That fighting spirit is going to have to suffice for this team until this summer but this team didn’t give up even when they knew they didn’t have the mojo to come back. There just isn’t that player with the strength to work as the goal scorer. Cassano is a set up man who rarely pokes his nose into the area,he usually does his work off to the left of center at about the penalty area line. Palacio is a move guy that starts to the right works towards the middle about 15-20 yards out. But there isn’t a guy to take over the center of the defense to give these guys room to work.

But they plug away. Everyone tried really hard and it was obvious. The passing was better than I had seen for a long time in the first 10 to 20 minutes. The first goal really knocked the team off balance but they responded. The second goal was just a beaut that left Handanovic flat footed. There wasn’t a lot to do after that, but the team kept coming, they kept on trying – someone even hit the crossbar at one point, I think it was Cassano.

This summer will see a lot more changes to this team. But the fighting spirit that I saw on Sunday… I hope that stays… longer than Chivu does at any rate… 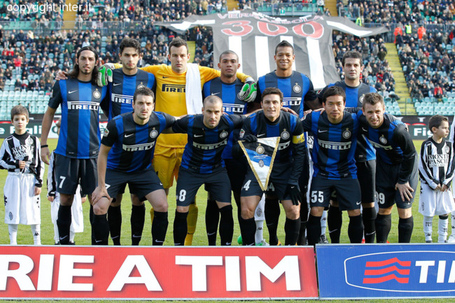 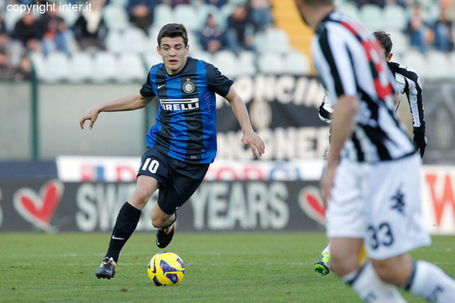