Share All sharing options for: U21 Internazionale Homegrown Dream Team

It’s a dream that I won’t let go of, this future, this apparently unattainable ability for my favorite club to be canny enough to ferret out talent at a young age, develop it and then slap it on the first team, only spending money on the truly gifted or the not in stock.

But it remains a dream of mine for the moment and perhaps further as it looks more and more like the young will provide the capital for the senior team.

I freely admit that this isn’t my idea. There was an article at fcinter1908.it that caught my eye which I will link to here about a sky report which I looked for but couldn’t find or I would link to it too just to prove how unimaginative I am and how great everyone else is. I am sure that it has made the rounds of the Internets – I fully expect the army of great guys at fedenerazzurra.com to have the article up in English.

Their list is a little different than mine, but that’s okay – at this point all of them are imaginary since I don’t see many of the kids around for very long this summer. Anyhoo, I used FootballUser.com to make this graphic which I will link to here so they get credit, you can see other people’s creations and you all can use it too if you are so inclined. 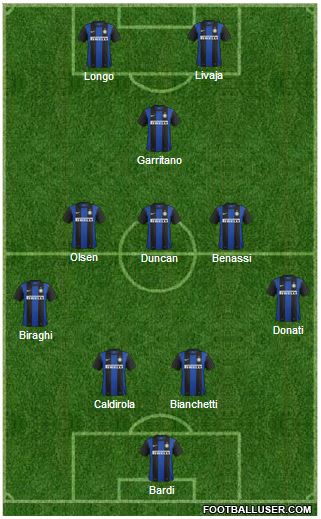 It’s not the greatest team in the world, now or even when they have fully developed. But you know what? I bet that given our current roster, this one wouldn’t be too far below it at many of the positions, especially FB/WB. I think that almost all of these guys could be on the bench without too much embarrassment at the very least. And there is some argument for Kovacic, he’s not homegrown… but he is U21. I thought hard and long about putting him in. I still think that there is an decent argument there somewhere. There might also be an argument for inclusion for Crisetig, Mbaye. Pasa and/or Bessa. Maybe next season when they each can get a full year's of work under their belt. I think they will all still be eligible for this next year as well.