The MAD's Away. Now The Kirby Can Play.

Hey guys! Would you believe I'm not dead?

Share All sharing options for: The MAD's Away. Now The Kirby Can Play. 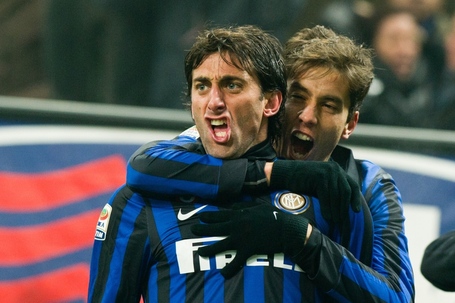 Hey everyone. I noticed that MAD was off on some family adventure somewhere and there is a God awful amount of comments on the last post. I decided to briefly talk about some of the issues that are really irritating me about this team we all love so much. Alright, here goes.

Jesus almighty Christ! How Cuchu is still on this team is beyond me. After watching all the friendlies and assessing the new formation and tactics, I've noticed that this position is the most important on the pitch. Having someone as immobile as Cambiasso in such a crucial spot really is a hindrance to the entire team. His lack of physical ability leaves our defensive game really wanting and makes everyone on the defensive end of our pitch look out of their depth. From what I've seen, within 2 passes he is completely phased out of play. I'm an optimist and honestly, I would let all this slide if he was bring something to the table. Maybe his passing game is good. Maybe he still has organisational skills. The sad truth is that he's lost every attribute that made him Cuchu. Now he's just an aging old fart whose holding on to what little of his career that's left and this is hurting us tremendously.

We all know that there are names in the wings that we are apparently going to replace him with, so I need not get into that. What I will say though is that if no one is signed to pick up the reins, then I really believe that we should through Olsen into the deep end. Of what little I saw of him, the boy brings energy and enthusiasm to the field and this is something we sorely miss.

If I were to ask everyone on this board who I hate the most they would all come up with the same answer: Chivu. Joking! We all know I love that guy. But in all seriousness, I hate Nagatomo with all my Asian/Syrian heart. Surprisingly, there is one that has surpassed Naga in my hate books. His name? Alvaro Pereira. The worst thing about this all is that they both have something in common. They are the only wing-backs that we currently have on the roster. Just like Cuchu, they bring absolutely nothing to the table. Their defensive work is borderline criminal, and their attacking, specifically their crossing, makes me want to do unspeakable things to my eyes. I will give them both one thing though; They run their asses off. Thing about that for me is that they both run like headless chickens, and almost always leaves our midfield looking like Milito's knee circa February 2013. And just like the DM position, they ask a lot of their teammates with their level of play. This is going to sound extremely sad but I have to say it. I'm happier to see Jonathan on the pitch marshaling the right side more than Naga.

I've been thinking long and hard about a solution to this position's issues, but nothing has come to me. If you kids could help quell the panic in my head about this situation, that would be grand.

Well, this is a little insight as to what's taking place in my tiny head. Please leave me with your thoughts on what I've said here. Have I been too harsh? Let me have it then! Am I just in my thoughts? Who knows. Let's just pray that the lyrical genius that is MAD returns to us sooner rather than later. God knows we miss him!