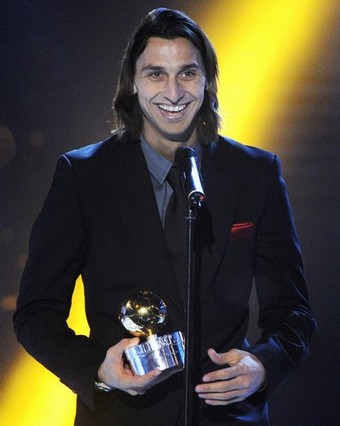 Zlatan was awarded "The Ball of Gold" as the best Swedish soccer player 2008 at the Swedish Soccer Awards in Stockholm. This is the third year he has won this title, and as Ibra said:
"Third time's a charm. Now it feels like I have been written into the history books."

The prize jury was a bit more eloquent, saying:

Zlatan is a unique representative of Swedish football at the very highest level. With technique and character he has created a space for himself both in the world elite and in Swedish football history.

There is no denying it - Swedes love Zlatan. Last time we were at the San Siro (Inter v Udinese, 1-1, thank you Crespo), we met this extended Swedish family who had come down to Milan just to see Ibra play. They just LOVE him. I admit, when he first came to Inter, I was dubious. I could not fault him for wanting to leave Juve for Inter (who wouldn't, right?), but I guess you could say that I just wasn't sure that his intentions were honorable. We took the relationship slowly, he and I, and now, after 2 great seasons, he has won my heart.

If you can stand it, here is about 10 minutes of Ibra being Ibra... C'mon, how can you resist?

Congratulations Ibra, and for goodness' sake, please to something with your hair next time!

But it cant be all about Ibra - we have other players on the squad. 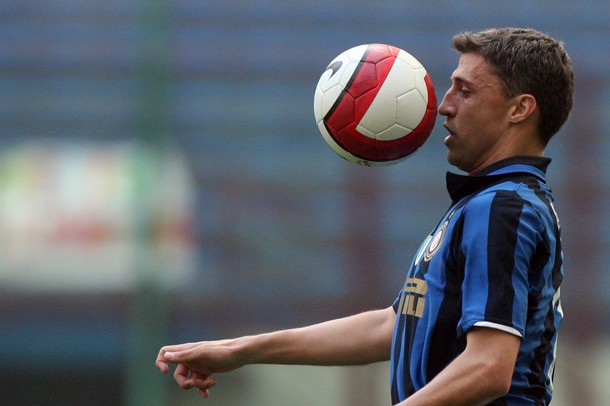 Hernan Crespo is back in the news.

The rumor mill has been at full grind about a possible move for him to Real Madrid. Apparently, they are desperate for a replacement for Ruud van Nistelrooy that is not cup-tied in the Champions League. Inter are happy to oblige, for 10 million Euros that is.

For his part, Crespo is "surprised" by Real's interest and swears that he knows nothing.

Well, he may not but Agent extraordinaire Ernesto Bronzetti certainly does. He has confirmed that Real Madrid are interested:

Yes, after the accident at Van Nistelrooy, the company seeks a striker. He offered for a contract of six months with an option for the following year but the prosecutor wants a two-year contract. Currently the situation is stopped.

Wow. I kind of think that Crespo should take the deal and run. Who else is going to pay him the kind of salary that Inter does? Where else is he going to get Champions League play? Crespo, I love you, really I do, but take the offer. Besides, then he could play under old Golden Bench Roberto Mancini again. Or at least that is the rumor.