Coppa Italia: An evening of joy and respect

Share All sharing options for: Coppa Italia: An evening of joy and respect

Better late than never! I had computer issues last night so it is up a bit late. 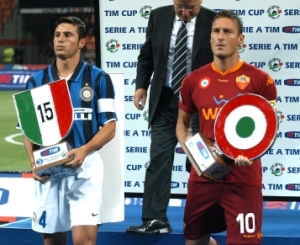 Well, here it comes, the last game of the season and, boy, will it be a doosey. No matter what you think of the Coppa Italia, I think both teams will be playing to win. Zanetti is convinced we will do well and that is good enough for me.

It is clear that Roma will come in to this with something to prove. Apparently, for them, this is some sort of litness test for legitimacy - like a second chance at the Scudetto. Think again, that ship has sailed. If Roma wins tomorrow, it does not mean that they are the "true" winners of the Scudetto, it only means that they are the winners of the Coppa Italia. If they loose tomorrow, I am sure they will find some reason why it was not their fault.

Spalletti's new tact is that second place in the league does not mean that Roma are losers, but runners-up. Of course, he also said that losers should always congratulate the winners - not a lot of that going on around here. So, how about this, I will accept the first statement if Roma fans accept the second. Perhaps it can be like Miss America: as runners-up, Roma will assume all Inter's duties and obligations should we be unable to perform them. I am pretty sure the position even comes with a sparkley tiara.

Mancini has called up our usual Coppa squad:

Ibrahimavic, of course, will not play. He is all about the Euros now. Cambiasso is injured, and Materazzi and Cruz are suspended.

I am not sure what to think of Solari and Maniche - they don't inspire much trust. For both, this may be their last time in the black and blue. Hopefully they will want to go out on a high note.

I would like to think the line up will be something like this:
Julio Cesar
Maicon, Zanetti, Burdisso, Maxwell
Pele, Vieira, Stankovic
Jimenez
Crespo, Balotelli

Of course, Toldo may start, and I have no problem with that. He has more than proven that he still has it.

This will be a difficult game for us, and aside from a chance for bragging rights, a sort of useless one. I just don't know how many players will really "show up."

Julio Cesar, Maicon, Chivu, Vieira, and Maniche have national duty coming up. They have already won the Scudetto so their minds may be with their national teams. Also, no one wants to get injured now.

How about this, lets try our hearts out to win, without hurting ourselves or anyone else, and have a really great time.

If, like me, you dont have tv coverage of this game, streaming locations can be found here.