Our Boys at Home and Other News

Share All sharing options for: Our Boys at Home and Other News

While there are still no movements on the Inter mercato front, there are a few other tidbits I thought might be of interest. Also, true to my word, I thought I would do a little run-down of Inter players who have been called-up to their national teams. 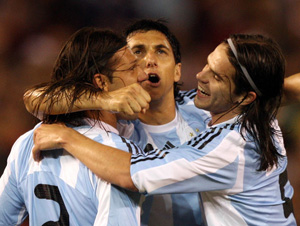 Argentina -- We have 4 players on the Argentina national team: Burdisso, Cambiasso, Cruz, and Zanetti. With help from a Burdisso goal, they handily beat Mexico (4-1) in their last friendly. The second friendly, against the USA, is starting as I write this. Burdisso and Cruz are starting. My big question is why is Nico so much better for Argentina than for Inter? World cup qualifiers start next week for Argentina. 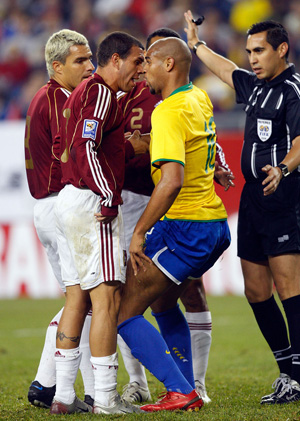 Brazil -- We have three players on the Brazilian National Team: Julio Cesar, Maicon, and Adriano. Brazil has played two friendlies recently, and are looking forward to the qualifier games against Paraguay and Argentina next week. The first friendly was against Canada where all three of our boys played passably, in my opinion, though a bit too forward. Brazil was not so lucky in the second friendly and they lost against Venezuela. Adriano started that game, and by the accounts that I could find, he did not shine. Maicon was subbed in for the second half and Julio Cesar did not play.

Columbia -- Nelson Rivas has been called up for the Columbian national team for their WC qualifiers against Ecuador and Peru. I hope he plays well for his team!

France -- Vieira has returned to full training ahead of tomorrow's game against Romania although it is still not clear whether he will start. He picked up a thigh strain early on and missed both friendlies. Hopefully he can represent his country without jeopardizing his fitness for club play next season. 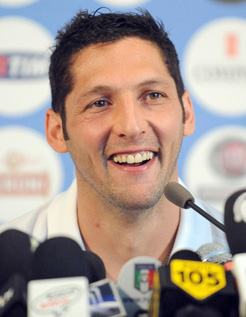 Italy -- As everyone has so thoughtfully pointed out, Marco Materazzi is Inter's only contribution to the Azzurri. It is thought he will be part of the starting team tomorrow, partnered with Barzagli. I would like to write more here, but really, I dont think I can do it in a civil manner. If you read the Italy Euro 2008 page it is pretty clear that Materazzi is not one of Chris's favorite players. Since I find myself wanting to mount personal attacks - I am a little protective - I will just walk away.

Romania -- Our very own Christian Chivu is the captain of the Romanian national team. He seems to have recovered from the shoulder problem that was troubling him at the end of the season. I am looking forward to the game tomorrow morning - I think they could well take France. Unfortunately, they will, of course, fall to Italy.

Sweden -- Ibrahimović did not look so hot at the friendly against Ukraine - at least not in the grainy highlight videos I could find. Of course, national team duty may not be his thing. According to the UEFA profile, he has not scored in an international for Sweden since October 2005! Yikes. Also, the knee is still bothering him and he is unlikely to play the full 90 against Greece. 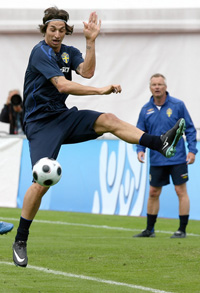 Honduras -- Suazo just helped Honduras beat Puerto Rico in a world cup qualifier 4-0. He scored 2 goals. Good job! Goal.com thinks Inter may make Suazo part of an offer to Roma for Aquilani. With Balotelli being a little brat (see below), we may decide to keep Suazo after all.

It seems that Balotelli and Inter are having some difficulty coming to terms on his new contract. According La Gazzetta, Balotelli wants something on par with Alexandre Pato who earns €1.2 million a year at AC Milan. Right now he makes €60,000 - pretty good for a 17 year old. Balotelli is quoted as saying that he "doesn't feel Inter inside (Non sento l'Inter dentro)," but apparently he still wants a 5-year contract. Goal.com says that Chelsea and Man U are interested. Boy, if he thought he didn't get enough playing time at Inter, I don't think either of those teams are right for him. Talk about your stiff competition!

In other Primavera news, Inter's youth squad cam up against Sampdoria's today in the youth-league final. Unfortunately, Inter lost 2-3, with a goal by Pedrelli and a converted penalty from Balotelli. The squad for this final included: Belec; Santon, D.Esposito, Federici, Fatic; Gerbo, Bolzoni, Pedrelli (Napoli 84); Balotelli, Ribas, Siligardi (Obi 65). I suspect we will be seeing some of these players next year. 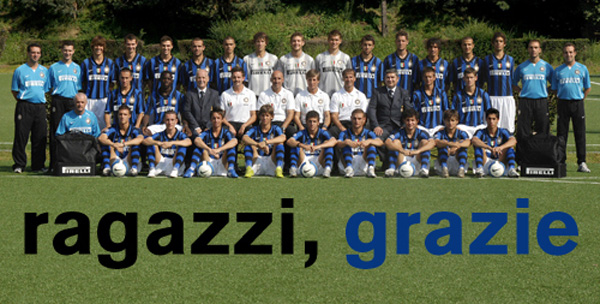 Mourinho is in Japan coaching an exhibition game but he has found a little time to speak to the press about Inter. He will not comment on any mercato rumors but he did say that Figo would be staying on another year.

Similarly, Marco says he would like to stay at Inter and finish out his career.

Inter and Cagliari could not come to terms on a transfer fee for Acquafresca so it will go to sealed bids. I really hope we can hang on to him - I think he will make a good addition to the team in 1 or 2 years time.

Oh, and here is something to warm the cockles of my heart: “It is absolutely impossible that Milan play in next season’s Champions League,” said UEFA spokesman, William Gaillard.

There was some talk of AC Milan taking a spot vacated by either Porto or CSKA Sofia who have been disqualified for match fixing and accounting irregularities. Instead of the vacated spots going to the next in line in Bulgaria or Portugal, it would go to the highest UEFA ranked team not already in the competition: Milan. It turns out, though, that: “The participants are not chosen based on the highest co-efficient but on the number of teams a country is allowed to enter." (Gaillard, see above)
So no Champions League for Milan!