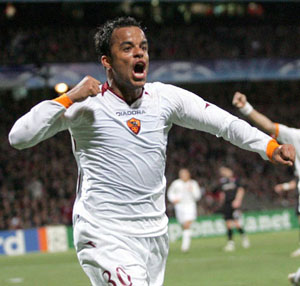 It is official, Amantino Mancini is all Nerazzurro! Yep, Daddy Moratti bought us our very own Brazilian winger - tricky tricky feet and all. Oraiali would not say how much Inter finally ponied up for Mancini, only:

La Gazzetta reports that Roma will receive almost 13 million euros (a few more than Moratti's 10 mil max), and that Mancini will come on a 4 year contract and earn 3.5 million euros net per season. The final details will be hammered out when Mancini returns from vacation next week.

During the negotiations, Mancini has been cool and collected, with nothing but nice things to say about both Roma and Inter. He told the Corriere dello Sport:

I don't know if this will be a goodbye, but to Roma, to the bosses and the fans I only have words of gratitude for what they have done for me. Thanks Roma. I chose Inter because it is a great club. They have a squad that is important and full of champions that can make the difference in any moment. Furthermore, it's the side that have won the past few Scudetti. When a club with such ambitions wants you it's inevitable to be flattered. It's nice to know that Inter like you.

Aw shucks. See, that is how you win friends and influence others - thank your current club and flatter the socks of the new club. On the opposite end of the scale, 180 degrees from this transaction, is the ongoing saga that is Frank Lampard's career.

A little time line:
June, Lampard is Inter's "number one objective."
June 28, Inter and Lampard supposedly come to terms and the transfer is eminent.
June 29, Chelsea insist that Frank is NOT FOR SALE!
July 6, Inter fax Chelsea a £6.5million opening offer (about 8 million euro).
July 7, Chelsea deny there has been any contact with Inter or that an offer was made.
July 8, on his first day, Scolari tells the press that he has spoken to Lampard and that Frank said his was happy at Chelsea and wants to stay for many years. Lampard sees the press conference from the training facility, flips out and calls his agent, who then issues a statement saying that Scolari is talking rubbish and Lampard's future is still undecided. Inter make an £8 million cash offer - Chelsea rejects it outright.
July 9, Chelsea offer Lampard a 4 year deal for £140,000 a week. Lampard, though, wants five years or nothing. Apparently, by this time, Lampard is so cheesed off at Chelsea that he is willing to make a four-year deal with Inter worth £120,000 a week, which will become five years if Inter lift the European Cup while Lampard is at the club. Chelsea say that Frank will see out his contract at Chelsea no matter what. 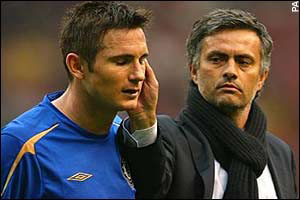 July 10, Mourniho releases the statement: "He is the best professional I have ever worked with. He's the player that trains better, has more concentration, more commitment and is always focused on himself." Inter get ready to offer Chelsea £10 million. Other reports say that Moratti will telephone Abramovich within the next two days to offer ₤9million.

If Chelsea refuse to negotiate, Frank has three options:
-- capitulate and take Chelsea's 4-year deal;
-- he can wait until January and sign a pre-contract agreement with Inter and move (for free) next summer;
-- or he can leave under the so-called 'Webster rule' - namely, Article 17 of Fifa's transfer regulations.

Under the letter of this rule, a player must serve notice of his intentions with 15 days of the last competitive game of the season. Lampard did not do this, so, if he invokes the rule, would probably be fined and/or banned for a few days from playing. Or at least this is the opinion of his legal team. By all accounts, Lampard is well and truly angry and wants to come to Inter. My question to Chelsea is: Why would a team want a player that does not want to be there? Clearly an example is being made and the European football community seems to be hunkering down for fight over player versus club power. I think the fight is a valid and inevitable one, but I hate that Inter are in the middle of it.

While trying to figure out why Chelsea are so keen on forcing Frank to stay, I came across this on the Offside Chelsea board (caution, the language is very foul and not for the easily-offended):

Each day the drama surrounding this transfer becomes more sordid. Poor Mancini, his arrival is being totally overshadowed by the whole mess. I, for one, am going to look at the bright side: We finally signed someone! Hurray! Whether or not Mancini's on-again/off-again performance will continue at Inter next season remains to be seen. I would like to believe that his lack of focus is tied to Roma and will not continue at Inter. It will be a fresh start - a chance to really show what he is capable of. I will give him the benefit of the doubt.

Still in air is the fate of Dacort. His contract has expired but he is still on the list for the 2008/09 squad. We also still have a glut of strikers, and Burdisso is supposedly in hot water for accepting a place on Argentina's Olympic team.