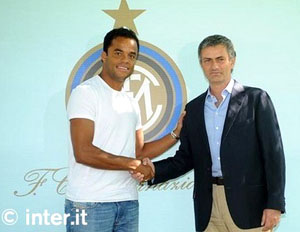 Tomorrow F.C. Internazionale start their 2008/09 season at the at the Centro Sportivo Angelo Moratti. The day will begin with medical tests and a technical meeting, then Mourinho will have a press conference in the afternoon. Friday the squad heads up to mountains to Inter's summer training camp in Brunico.

Joining the squad will be some up-and-comers including:
Francesco Bolzoni (midfielder - he is also on the first team list),
Jonathan Ludovic Biabiany (striker),
Andrea Mei (defender)
Davide Santon (defender/midfielder). 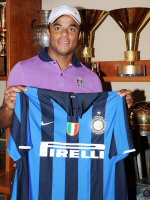 Also reporting for duty tomorrow morning will be Alessandro Faiolhe Amantino Mancini.
For his services, Inter will pay Roma a total of € 13 million in three annual installments of 4.4, 4.3, and 4.3 million euro. After that, it gets a bit more convoluted. There is a variable fee tied to Mancini's performance that will max out at 1.5 million and Inter and Roma will play a friendly in the 2009/2010 season. So there you go.

As it stands, the squad is still a bit bloated, especially in the midfield and attack - and that does not include any new signings.

Well, Crespo may still be going to Sampdoria.
There is nothing official, but Samp sound like they want him. Of course, Crespo wants to stay, but if he truly wants to get back on the Argentine national team, maybe he should consider the move. Dont get me wrong, I like Crespo ... I would like him even more if he would regain his old form. Still, I would rather see him play at Sampdoria than sit on the bench at Inter.

Stankovic may still go to Juve. According to TuttoSport (through Goal.com), Moratti has lowered Dejan's price to below 5 million. A bargain! There is also rumor of a loan to Juve (also on Goal.com).

And of course, there is poor Adriano who may be part of some last ditch effort to pull Lampard.

Suazo? He wants to stay and try for a first place. But is there room? I am of two minds over Suazo. He could be good and he has a few more potential years of playing in him, but he was just so darn lousy last season. I guess we could give a few more months. There is always the winter mercato.

Besides our new (well, new to us) Brazillian? Who can say. 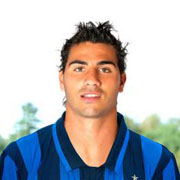 Quaresma may or may not still in the works. The club say Quaresma will be there next season but he has yet to show up for training (he says he is sick). As you can see by this fine piece of photoshopping, he looks mighty fine in blue and black.

Lampard... I am so over that. It will happen or it wont. I am changing the channel on that soap.