The Boys are Back in Town! (with the new kit)

Share All sharing options for: The Boys are Back in Town! (with the new kit)

And I am so excited that I can hardly stand it! 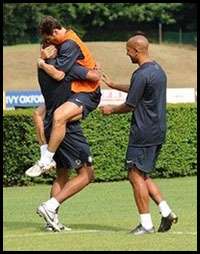 Training began today for the upcoming season and over 3000 fans came to see the new Mister at work. Apparently they were in fine voice, chanting "portaci Lampard, Mourinho portaci Lampard" (bring us Lampard). I would like to add "ma non per 20 milioni." I think we all can agree, though, it is very nice to see the sqad in training kits again. It literally warms my heart. The team seems happy to be back and there appears to be a real comradery between the players. In fact, some of them were very happy indeed to see each other (yes, that is our fearless captain and Maicon).

In yesterday's press conference, Mourniho spoke a bit about what he expects from his players:

I can't ask the players to do things that I can't do, I only ask them to do what I can do too. If, for example, I get here an hour and a half before before training I can't accept a player arriving late. With common sense and communication, we won't have any problems. There might be small internal fines for lateness or forgetfulness, but I don't think the amount of the fine is important for players who earn e few million euros. What counts is that training must start at ten if scheduled for that time. If there are 24 players on the pitch it's perfect. If there are only 14 I will just work with them because I won't accept anyone else... They will go home. And they will go when even when there's a match.

Apparently the team took this to heart, and training began ten minutes early. Clearly, this man is here to work! Even Moratti, who was at the training center to see what was what and check out Mourinho's moves (at Mou's invitation, no less) was sure to be on time, saying:

Yes. Even I was almost worried about being late... This was a public message that he gave, and I think he spoke to the players with lots of clarity, fondness and faith. He's trying to create an atmosphere of discipline and mutual trust. 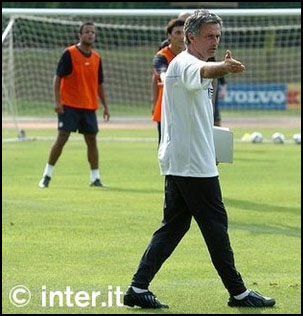 "An atmosphere of discipline and mutual trust." Music to my ears. I know Mancini did great things for us - and I thank him from the bottom of my heart - but I never really felt like the majority of players respected him 100% of the time. And after the Liverpool affair, could building an atmosphere of discipline and mutual trust really have been possible with him? I dont think so. Moratti went on speak of Mourinho's "great dynamism" on the pitch. Really, would you want to disappoint this man? I think not. He looks so focused and organized - he has a clipboart and everything!

While the whole squad did not train on the pitch -- Ibrahimovic, Vieira, Samuel and Chivu are still injured and worked with medical staff -- the players that were there seemed to be really pulling out the stops (cue the montage). 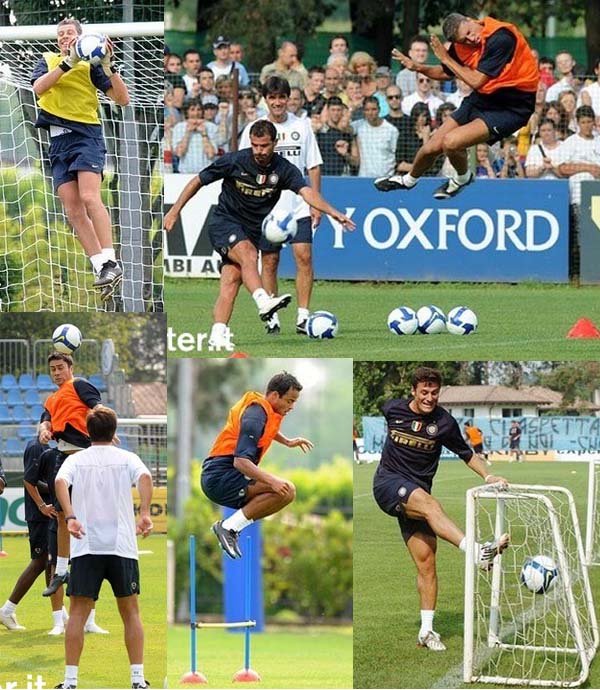 (Alessio, that last one was for you). Isn't it odd to see Mancini up there? It will definitely take some time before that looks entirely right.

So, what now. Well, we seem to be moving on to Plan B in the transfer market. I dont think the squad is complete. Mourinho was quite specific, saying "I need another midfielder." Any thoughts on who that might be? Personally, I am still holding out for Quaresma. As he has yet to take the field with Porto, he may still be in the works. I think we should have a little Inter Offside pool on who this mysterious midfielder will be. I am optimistic and will stick with Quaresma. Besides, I just dont see Napoli selling Hamsik.

A couple of other things Mourniho said caught my eye (both the transcript and video of the press conference are on Inter's website). First, Mourinho said he was going to make something of a personal project out of Stankovic:

Stankovic isn't a problem. I like him as a player and what I will say now is what I told him earlier, otherwise I wouldn't allow myself to say it: for me the Stankovic at Inter has never been the Stankovic he was at Lazio. For me working with him is a challenge. If possible I will try to get him back to being like he was in his Lazio years.

The other one is sort of snarky, but I love his response to Ancelotti's dig ("Mourinho to Milan? He can't even kick a ball..."):

... I think he forgot one important thing. In the history of Milan a super important coach was Arrigo Sacchi who never played football better than me. Personally, my dentist is fantastic and he's never had toothache.

Pure class. Plus, he has those oh-so-cute dimples. For sure, now we have the dreamiest coach in town. For reference, here is the whole staff - Mou's gang, if you will: 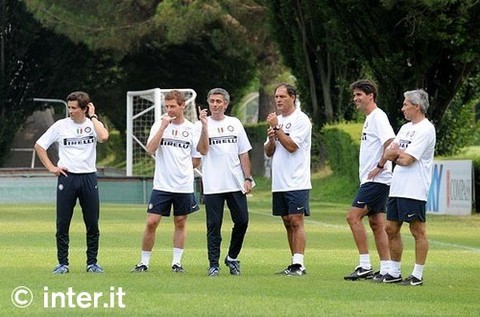 Oh, and in case you missed it, Inter are now proud half-owners of Luis Jimenez.

And here it is, the new kit. It is not as bad as it could have been. I can live with "chocolate" shorts. 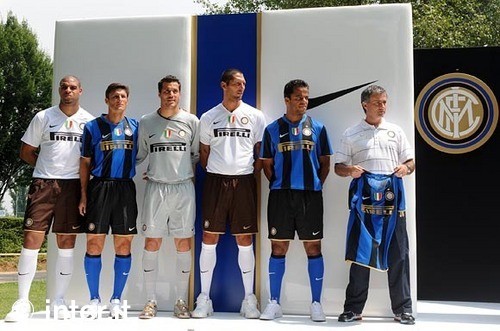