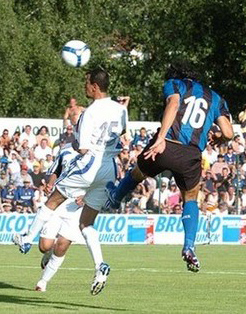 Ok, so it was only 1-0 against Al-Hilal, but a win is a win and it is nice to start out on high note.
First Half:
Formation (4-3-3) -- Julio Cesar; Santon, Burdisso, Pelé, Bolzoni (Biabiany); Vieira, Cambiasso, Zanetti; Figo, Adriano, Balotelli. (so it seems that Zanetti is moving back into midfield).

I have only been able to find a run-down of the game in Italian (see the link above) so I thought I would give a little Reader's Digest version of the game.

Al Hilal had the first chance with Salman testing Julio Cesar at five minutes. Inter answered in the 15th with cross in from Santon that unfortunately was blocked. We had a couple more drives but nothing was on target. Julio Cesar stopped a shot from Tarik, then Al Hilal's keeper stopped an "insidiosissimo" shot from Figo. At the end of the first half, Balotelli crossed the ball from the three-quarter line, finding Nico's head then the back of the net.

Inter almost had a second goal when Crespo found the back of the net at the 53rd minute, but it was disallowed for offside. Maxwell tested the keeper next, but could not beat him. Maicon, Jimenez, and an "excellent combination" with Crespo and Mancini try to no avail. At the 74th minute, Toldo was tested from 20 meters by Altemyat. Then, at 92 minutes, a header from Crespo grazes the crossbar.

From what I could gather, Mancini played well, but was too long on the ball, allowing Al Hilal's defense to shut him down. Both Toldo and Julio Cesar stopped the ball when tested - always a good thing for a keeper. Crespo was Crespo, off side and slightly off target. None the less, this is a new season and a clean slate. I will not make too much of our performance today - it was our first game with a new coach and I am glad we won. Great, now I have "We've Only Just Begun" from the Carpenters stuck in my head. (so many hills to climb, we start out walkin' and learn to run....)

Which will lead to the first game of the season:

And I doubt that will be very friendly at all. 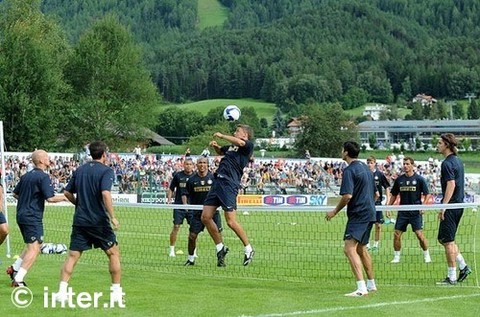 For the past week the squad have been training at our mountain facility in Brunico. The first half of the week, it was all fun and games and smiles and sweating. Then yesterday, Mourinho closed the doors of the training session so the team could practice tactics. Apparently the fans who had come to cheer the team on were not happy. Mourinho, though, was firm in his decision saying:

I have a lot of respect for the fans, in fact also last week at Appiano we had an open training for the people. But I know that along with the many Inter fans who have come here to transmit their affection, there are many coaches and scouts of other teams, which might be our opponents over the course of next season.

I am sure all us fans will sleep better knowing Mou's tactics are safe from prying eyes! If other teams want to know what we are up to, they will have to wait until we beat them on the pitch. No, really, I am kidding (hard to tell over the internet, I know). Is espionage really a problem in football? or is this just another publicity stunt to get everyone scratching their heads - you know, a psych out? 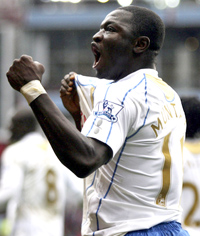 Well, now that Lampard is a no-go for now and possibly for ever, Inter have turned their sights to Portsmouth and Sulley Muntari. You may remember him from 2006/2007 when he played for Udinese. La Gazzetta is reporting that he has been offered a 5-year deal, starting at 1.8 mil euro that will grow to 2.5 with bonuses. Portsmouth has been offered 14 million euros, 2 million more than they paid Udinese just last season. Apparently Muntari will fly to Italy for the final paperwork on Friday (if you believe the gossip). I know very little about this guy, except that he helped Portsmouth to win the FA Cup last season and he scored the winning goal against Man U in the 6th round (I guess I knew less than I thought - Thanks Daniel).

Basic stats:
2002-2007 played for Udinese scoring 8 goals in 113 appearances
2007-2008 played for Portsmouth scoring 4 goals in 29 appearances (much better!)
He also plays for the Ghanian National team and was voted as an All-Star Player during the 2008 African Cup of Nations Tournament in Ghana.

Our old friend Quaresma is still in the picture. It seems that Moratti has tabled a €25m offer for him. Other "reports" are that Quaresma's agent was in Milan on Monday to finalize the details of the transfer. Lets hope it is true this time. He still has not trained with Porto, though he did show up to the facility today.

We are also looking to the future. Inter have sighned their very own Brazillian Teenage Sensation (take that AC!) named Philippe Coutinho. Due to worker regulations, he cannot come to Italy until 2010 (he is only 16). The fee is reported to be 10 million Brazilian reals (not 10 million Euros). Next year he will play for his current team, Vasco de Gama. It seems this is quite a coup as Real Madrid wanted him so badly that they illegally offered his father a job. What we have to look forward too:

And a sure sign that I am tooooo old - TV shows from my childhood are coming around again. I just saw an ad for a remake of Knight Rider! Yikes! Besides, who could ever replace the Hasselhoff?