Oh Ricky You're So Fine

Share All sharing options for: Oh Ricky You're So Fine

You're so fine you blow my mind, Hey Ricky!
Yep, after all the will-he wont-he drama this summer, it is official. HE WILL! Well, at least for 18.6 million euros, Pele's card, and some performance-based bonuses he will.

You have no idea how happy this picture makes me. Sure, we had to drop a huge load of cash and give up Pele in trade, but that is what rich owners are for - buying the bling. 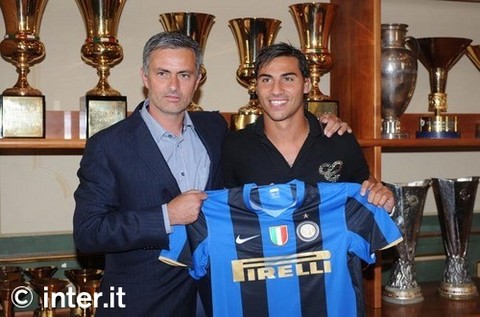 I know, I should have done some review of the Sampdoria game on Saturday (we drew, 1-1), but I started watching YouTube videos of our new number 77 and, well, he is just a whole lot more exciting.

Still, for those of you who could not watch the game, I found these highlights.

All in all, it was an ok game, a C+. We had the expected problems with our patchwork defense. Luckily, though, Cassano was too nervous to take full advantage - only one of his strikes was on-target. Also, I was happily surprised at Materazzi's performance. Ibrahimovic finally scored - that will do wonders for his confidence. It was disappointing to concede the goal, but this was Marco's first full game since last spring and Cambiasso, while proving competent, is not the same as having Chivu, Samuel, or even Nico back there. Once we straighten out the mess in defense, hopefully errors like the one that led to the goal will be few and far between.

So there you go, a not-so-stellar first day but a very exciting end to the summer mercato. I know, we have lots left to discuss - Champions League squad lists (who did and didnt make it), international call-ups, lingering injuries.... There will be time for all that tomorrow. First, lets just bask a little little more in the dazzling light that is Ricky Quaresma:

And remember, now that Mourniho has won the Italian Super Cup, he not just a Champion, but a Super Champion.