Back in the Saddle Again

Share All sharing options for: Back in the Saddle Again 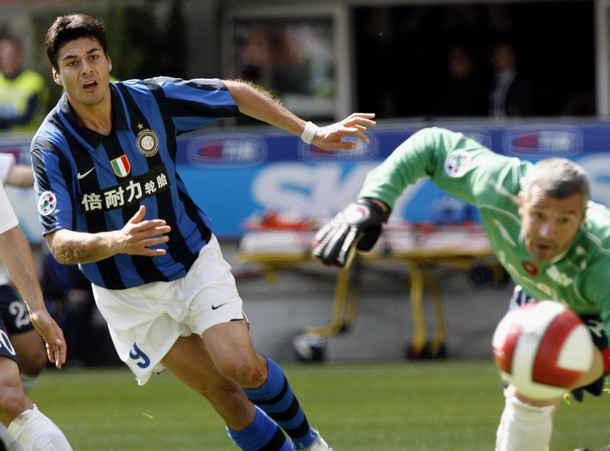 Finally, something besides crazy transfer rumors to talk about. The winter break is over (despite the snow) and Inter have invited their Sardinian friends over to the San Siro for a little kick about. Cagliari (or Kag-lee-are-ee if you are a match announcer on FSC) come to the match with 21 points at 13th place. Inter, as we all know, are top of the table with 42 points. On Sunday, our two closest rivals play: Milan go to Rome where Beckham will find out what it is like to play in a real Serie A game, and Juventus entertain Siena in Turin. While the Roma - Milan game is a toss-up, Juventus are the favorites against the Tuscans. As Juve are only 6 points behind us, we must be extra careful to win this game and keep our lead. We may need those 6 points later. Or, as Julio Cesar puts it:

"Manchester? I think of Acquafresca more than Ronaldo and Rooney. We must leave with three points: the more difficult match is truly the first of the new year, as against Cagliari"

Here is what happened last time Cagliari came to town: 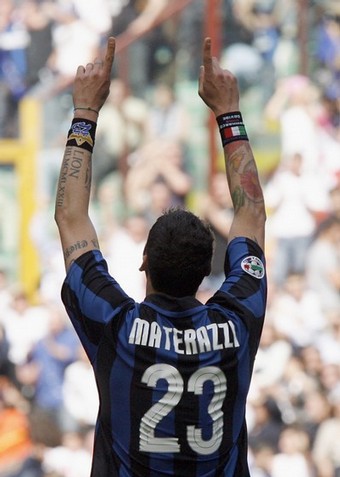 We managed to pull a 2-1 win out of the match, but as you can see, we also missed a fair number of sitters. Luckily, Marco (right) and Cruz (above) came through in the end. For Marco, it was the end of a long dry-spell. When he headed that ball into the back of the net, I distinctly recall leaping up and doing a happy dance around the room. This year, although our need for points is not so dire as last April, we are once again chasing the Scudetto so every game, especially those against a bottom-half team (sorry Cagiari, but it is true), is a must-win.

Inter and Cagliari have met 58 times in the Serie A. Of those games, Inter won 27, drew 22, and lost only 9. Even better, of the 29 home games, Inter have only drawn 6 and lost 5. Still, Cagliari are not push-overs. They had a rough start, but by October, they had managed to turn things around, beating Fiorentina and Palermo. They absolutely annihilated Bologna (5-1) and came away with a respectable draw against Napoli.

Bonus for us: Cagliari have a terrible away record. They have only 4 points from their travels: 3 against Torino and one from that draw against Napoli. Even with Acquafresca (sent to Cagliari by Inter to pupate into a beautiful striker), they are totally beatable. That is, if we keep our wits about us and play like we mean it.

Luckily, I dont have to write too much here. Jeremy at the Cagliari board has written a preview from the Sardinian side of the pitch. I know very little about this team, so I suggest you direct any questions you may have to him.

What I can say is that they have two dangerous forwards in Acquafresca (6 goals) and Jeda (5 goals). Also, they are a little fouly: the team has picked up 31 yellow cards (8 for Conti alone) and 3 reds. As a result, Cagliari will be without two of their staring central defenders: Diego Lopez and Paolo Bianco. Both are suspended.

Another interesting little tidbit (thank you ESPN statistics) is this chart of goals scored and conceded by time for Cagliari:

The chart suggests that they are at their most dangerous right after the break. They come out all fired up and put one in the back of the net (which is true for many teams, I bet). Also, they tend to tire towards the end of the game (duh), causing huge lapses in concentration it seems. Inter are known as a team that plays to the last whistle, and, as the chart below shows, we are just the team to exploit any chinks in their defense.

Just for comparison, here is the chart for Inter:

Interestingly, when you go through the attack charts for Cagliari's last couple of games (here and here), you see that they mostly feed the ball to Acquafresca. Whatever side he is playing on is the side most of their attacks come from. Shut Bobby down, and that takes away a significant threat. Since Maicon is out, what do you bet he plays on the right?

But enough about them, lets get to the good part

The bad news is Maicon is suspended. The really bad news is that Stankovic injured himself in training today.

Mou also had some words about his call-up list and the notable absences of Adriano and Balotelli:

"The call-ups are a message for everybody. In this moment I can't think only about the match against Cagliari, an important match. I am forced to look beyond that and think about Genoa and Atalanta. Adriano and Burdisso have not been called up either. They won't be on the pitch tomorrow night but they already know they will play on Tuesday."

As for Mario Balotelli and his apparent lack of playing time:

"With 13 appearances and 712 minutes played, Mario is the second most used striker after Ibrahimovic... In terms of quantity, Mario has played a lot. In terms of quality, it's a different matter."

That, taken with Mou saying that the transfer door swings both ways (in and out), tells me that Balotelli (or his brothers) better stop complaining and get to work.

As for the lineup, Mou has been experimenting. He would not say if Santon would start on Saturday, instead Mou hinted that he may opt for the experience of Zanetti in right back with Chivu in midfield (?!?). As Stankovic is out, he has been working with both Jimenez and Figo to fill that position.

La Gazetta thinks that Mou will give the kid a chance:

I have not seen the Santon play, but I think I am happy with this line-up. Lets see if Mou actually does it (bets, anyone?).

Ha! I knew it. When I wrote this on Thursday, La Gazzetta had Santon in their projected lineup. Well, now it has changed. They think that Zanetti will drop back to rightback and Chivu will play in the midfield. I guess we will find out in an hour which is right!

This game will be a test of the squad's depth. The team will be missing two key players, one of which we are supposedly too reliant on. If we can take down Cagliari (hopefully with a clean sheet), it will go miles towards the team's confidence and help bury the ghosts of last season's spring. On our side, we have had a solid week of training, and, with the exception of young Mario, moral is high. On their side, they have had two weeks of training. Like all teams, they come to Milan to take down the Champions. Cagliari will play attacking football - they have nothing to loose. Inter must play confidently, but not arrogantly. If we play like we can, there is no reason why Inter cannot get three points from this game.

As for Acquafresca.... What ever happened to the good old days when teams didn't field loaned players against the teams that owned their contracts. Sigh. The good old days. When asked about Acquafresca, Mourinho jokingly said:

"There will be no need for Acquafresca to play well tomorrow to make a good impression on me. Indeed, if he plays too well, I will be angry and he will stay at Cagliari another season."

He and Jeda will be our biggest problem tomorrow. That, and an inexperienced Santon (if he plays). Inexperience and nerves lead to fouls and Bobby takes a mean free kick (just review last game against Reggina). He is always dangerous standing over a ball.

Hey, what do you say about Ibra for a brace, Figo for surprise strike, and JC for a sparkling white clean sheet!

See you all here tomorrow for the match.

That is one way to hold up a ball 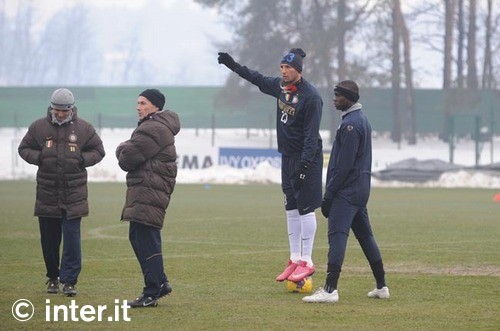