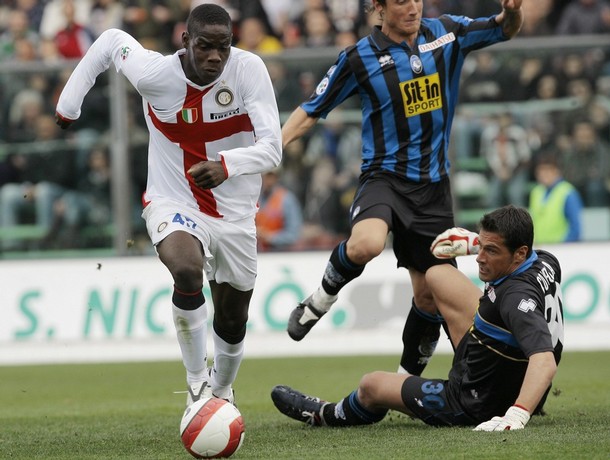 Atalanta is fleet of foot but easily distracted. True, we dont have any golden apples, but Zlatan has three golden balls so maybe that will suffice. The Orobici did not have a good start to the year; they lost last week against Palermo 3-2. Still, they have a pretty good home record so far, having only lost to Milan and Juventus in Bergamo. On our side, Inter have not lost a game to Atalanta in Bergamo since 1994. We will be hoping to extend that record by at least one more year.

Last year, Inter handly won this fixture 2-0 with a goals from Vieira and Balotelli (dammit! I had Bobo on the brain): 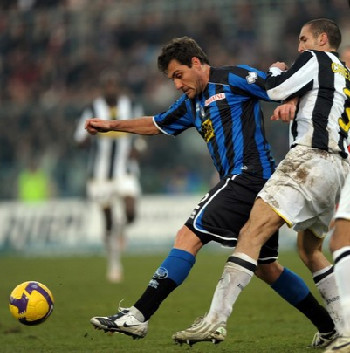 Unfortunately, it looks like the Atalanta board here on the Offside is dead. We will just have to muddle through on our own. As I am sure you all know, our old friend Bobo Vieri has found his way back to Atalanta, making this his third season with team (1995/6, 2006/7, 2008/9). He has played six games this season, scoring two goals. With players like Floccari and Doni available, though, I dont see Bobo making the starting lineup. Still Del Neri likes him, saying:

"We rely a lot on Vieri, on his quality. He is a great champion who has worked hard and we hope to have in him our talisman for 2009."

Floccari is having a pretty good season so far with 9 goals and 2 assists. Doni has also been dangerous, with 3 goals and 4 assists. Certianly they will keep Inter's defense busy. Atalanta are most dangerous in the last 15 minutes of the game, having scored 10 of their 23 goals after the 76th minute. Inter, though, have not conceded a single goal this season during this time so we may be a match for them yet.

Mourniho has called up 21 players:

As I'm sure you have all noticed, Balotelli is not on the list. Although Mou says Mario is working better and they have come to an understanding, he felt it would be better to award Obinna and Crespo for their good showing against Genoa. Personally, I would prefer Balotelli to Obinna. But whatever - Mou knows best.

With Muntari suspended for accumulating too many yellow cards, it looks like Chivu may find himself in the midfield again. Ill Corriere dello Sport thinks so, and I agree: 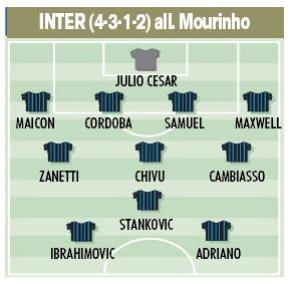 I dont think I am spoiling anyone's surprise by pointing out that Milan won today. We can hope for at least a draw from Lazio against Juve on Sunday, but I am not looking for any favors. We need to win this championship, not have others loose it. This fixture is the last of the first half and I would really like to go out on a high note. Right now, we have a 4-point lead over Juve. A loss tomorrow would surely cut it to a single point. One point is too close, much too close. Even a draw would put us one game from second (shudder). The Genoa game showed that Inter can place the ball on target. Now, we just have to get it past their keeper. If Adriano can put in a performance similar to the Genoa game, we may be in for a real thriller. With the inclusion of Stankovic, Cambiasso, and Ibra, a big win is not out of the question.

Samuel has made a couple of defensive errors, both leading to goals in the last two games. I think, though, they had more to do with poor pitch conditions at the San Siro than Samuel's ability - at least, I hope that is the case. I will be looking for The Wall to return for this game. Between Samuel and Cordoba, a clean sheet is definitely possible. Hopefully Stankovic will not be too rusty after his layoff. Now is the time to show Italy a team that can compete in Europe. Although Atalanta comes into this game at 11th place, they are a team we must take full point against if we are serious about the league. We must fight for first place, and not let the forces of darkness sweep the land again. No more coasting. We must come out swinging!

Maicon has gone all gangsta and is coming for you, Atalanta!