Share All sharing options for: Back On Top: Inter 1 - 0 Sampdoria 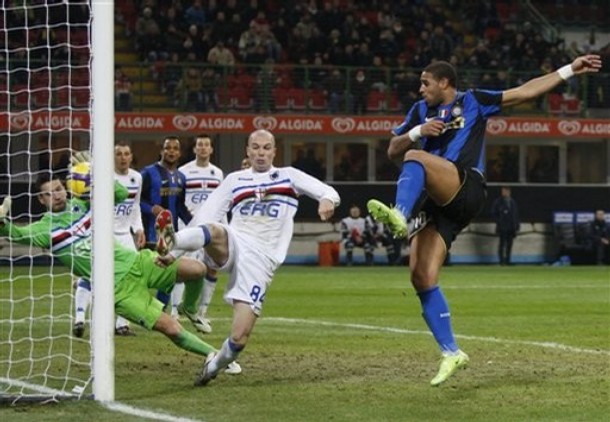 That was bloody. Still, we managed to take full points, and with these three very important points, find ourselves back at the top of the table - at least until Wednesday. The game saw 6 yellows (4 for them, 2 for us), 1 red (for Mourinho), a stupid punch (by Adriano), and a split head (Muntari). There were calls for penalties, injuries (2 a piece), and 3 gut-wrenching injury scares (JC, Zanetti, and Cambiasso). Probably the worst thing, though, was that Inter only managed to score one crumby goal. Even after Mazzarri was forced to take off his last defender, Inter could not score on a squad comprised almost entirely of midfielders. Very disappointing. Highlights after the jump.

Alright, so it was not all horror and blood. Inter did have a few good moments, but then Adriano got tired. As we had used most of our substitutions to replace injured players (Samuel at the half, then Chivu at towards the end), he was stuck on the field and had to make the best of it. The stats show that Inter had the lion's share of shots, and that we were the more attacking side:

.
.
Whatever attacking force we may have had was totally gone by the 70th minute and the last 20 minutes were a slog. Figo helped some -- it was nice to have someone who can actually do something with a dead ball for a change (what the hell was that Stankovic/Adriano free-kick lunacy?), but it was just not enough. Although I am quite happy that Adriano was able to actually score, his antics off the field, and now on as well, are just getting too distracting. 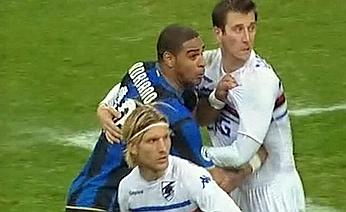 Yep, Adriano is in trouble yet again. This time, he punched Samp defender Ganiele Gastaldello in the gut. The ref didn't see it (I didn't either until the super slo-mo replay), but the eagle eye of the camera did. Adri has been handed a three-match ban for his asinine behavior. That will give him time to go play the friendly for Brazil, I suppose (Dunga also wants JC, Maicon, and half of AC Milan's squad). I find that I have less and less patience for Adriano. I say, lets get what we can (about 18 million euro according to TMW) and find another striker who is a little more serious about his job. Adriano is just too much drama.

Speaking of drama, Jose had his first Italian sending off and will have to watch the Catania match from the stands (unless there are some large clothes hampers in the dressing room). He was not happy with the refereeing in the game (was anyone?), and especially angry at the phantom fouls that were being called against Inter. His take is:

"I was sent off because I told the referee that he had fear. There had been so many players booked in the first half. Stankovic had made a perfect tackle. I would prefer not to say much about the referee although I think he had little experience and he feared someone."

[On a side note, Jose recently gave a nice little interview with ESPN. Nothing momentous, but it is in English so there are no strange translation issues to deal with. Check it out.]

Alright, back to the carnage. Samuel and Chivu came off injured during the match. According to Inter's web page today, Chivu has strained his adductor muscles and Samuel has strained his flexors. I have no idea what this means, except for that we may be having a crisis in defense. Again.

Yep, Marco is still injured with some thigh thing, while Burdisso and Maxwell were sent home with the flu today. Add that to Chivu and Samuel, and it looks like we may either see the elusive Rivas, or that Cambiasso will find his way back into defense again for Catania. But we will have time for that particular piece of stress tomorrow.

Mancini made a rare start on Sunday. I sincerely hope that he is not the best we can do in that position. Except for a small hissy fit, he was almost non-existent. So much so, that until I got to this point of the blog, I had almost forgotten that he played at all. He wants to go, I dont see a use for him, lets sell him on and put that in our striker fund. Between Adriano and Mancini, Dacourt and Crespo, we could most definitely pick up a Tevez or two.

For me, Sampdoria's man of the match was Marius Stankevicius - he was just everywhere for them. On our side, though, we have Stanko-licous, who also played his heart out (if only that shot off the crossbar had been 6-inches lower!). Maicon was his normal fabulous self, and Cordoba had a couple great tackles. For his first Serie A game, Santon was not too shabby - clearly a little rattled by Samp's physicality (to put it mildly), but he did an ok job. Still, my man of the match has got to be Julio Cesar. He didn't have a whole lot to do, but he stayed awake, played through the pain, and saved us from Dessena's last minute shot, ensuring we won all three points.

And so, I will leave you with Julio Cesar, the saver of bacon.