Back to Training and the Winter Market Opens

Share All sharing options for: Back to Training and the Winter Market Opens 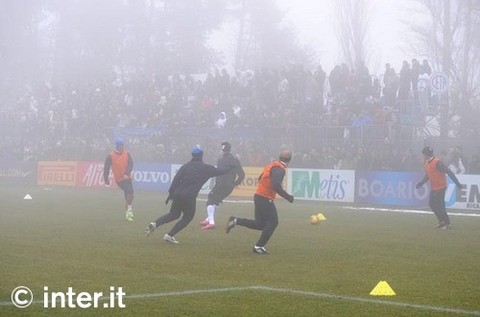 In the fog and in front of 1000 fans, Inter returned to training today. Thank goodness because I was starting to get bored. As a bonus, the winter transfer period opened bringing rumors and gossip to all the good little girls and boys. Transfer periods are always a difficult time for me. I find I have grown attached to many of the squad members and I get terribly nervous at the thought of any of them leaving. That, and in the past, I think it is fair to say that Inter has been a bit schizophrenic when it came to transfers. The club has been known to spend large amounts on players that, in the end, turn out to either be disastrous or simply ineffectual. Last winter we brought in Maniche to fill the gaping holes that injury had cut through our midfield. Well, he never really fit in so back he went to Atlético Madrid (where he is doing pretty well). This year, it seems Inter is looking for a striker and the rumors are flying.

Readers here overwhelmingly think that Inter need to participate in the winter market, although a fair number think the club only needs to sell:.

The four "other" responses are:

only if good opportunity
Bring in Aquafresca!!
buy some fucking italians.
Depends on Adri's situation

If you believe the papers, Mourinho agrees and is desperately looking for a half-way decent striker to take some of the pressure off of Ibra. Apparently, that is harder than you might think.

Yesterday, the hot news was Michael Owen. Reports were saying that Inter would offer Adriano, Suazo and piles of cash to get him. Today, Mourinho says: "I haven't given Owen any thought at all. The last year he has had serious injuries and he is no longer the Owen that we all knew." 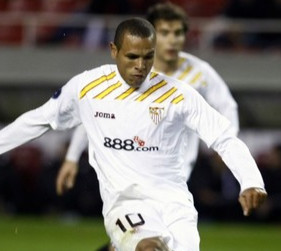 So, I guess that is the end of the Owen to Inter rumor.

Instead, the press has turned to linking Inter with Brazilian Luis Fabiano of Sevilla. He has 8 goals in 16 games so far this season. Unfortunately, both Chelsea and Manchester City are also reportedly interested.

Milito has also been linked with Inter, but Genoa have been quick to say that he is not for sale, at any price.

For the longer term, there is some talk (mainly by his agent) that Inter are close to signing Argentinian right-back Marcos Angeleri. Apparently Santon will leave (hopefully on loan) to make way for him. Still, all I could find were dubious sources, so take this with a grain of salt. If the rumor is true, though, it will definitely increase Inter's pirate contingent. 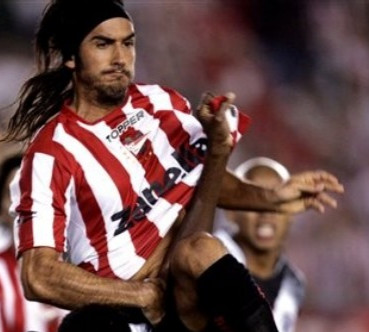 Adriano did not turn up today for training as with the rest of the squad causing all sorts of consternation with the press. Inter released a statement saying that Adriano was excused today for medical tests. Considering Adriano's plane did not land at Malpensa until almost 8pm, though, it seems a little late for house calls.

What a bad start to the new year for Adriano.

“There was a misunderstanding between Adriano and the club. Inter had not booked, as they usually do, Adriano’s return flight from Brazil. This meant he found himself without a seat on the right plane. He had to organise the transport himself and pay for the ticket out of his own pocket.”

So now Adriano, a grown man with a staff and an entourage can not make his own travel arrangements? Really, if Adriano is not responsible enough to get himself to Italy on time, how can anyone trust him to step up on the pitch? Does anyone else think Adri just failed a little test? What a nightmare. Moratti loves him and, at the very least, wants him back to some sort of condition so he can recoup some of his monetary losses. I think Mou has had it. He doesn't want to be Adri's father or babysitter. Yikes.

On the bright side, he was an hour early to training today.

Dacourt is absolutely on the way out saying:

"I have started to think about a departure. It is the coach's choice. I am on nodding terms with Mourinho - that is all. His decisions have been difficult to take. I was in the starting XI before his arrival. I told myself it was up to me to change his mind. He doesn't seem to have faith in me, though, and I have noted that. I have propositions from Italy and England. Not from France. But we will have to see what happens. I want to play and have fun, which is essential at this stage of my career."

The only question now is, where will he go? The newest suitor is apparently Tottenham, though Bologna may still be in the mix.

According to some rag called Forza-Roma, Crespo and his wife spent Christmas in Rome. This, coupled with Totti's new injury and the fact that Crespo is not cup-tied, led the author to speculate that he is on his way to Rome. Only time will tell.

With the return to training also comes the return of press interviews. Mourinho gave his first of the year to Antonio Bartolomucci of Mediaset where he answered such burning questions as:

Have you ever thought of opening a restaurant?
"Never, never, never"

Have you ever thought of entering politics?
"Never"

To play a joke with President Moratti?
"No"

Ever thought to get help from a psychoanalyst?
"No"

To become a homosexual?
"Never, never"

Wow. Talk about all the news you need to know.

And our first keeper photos of the new year - I think JC is missing the Brazilian sun. 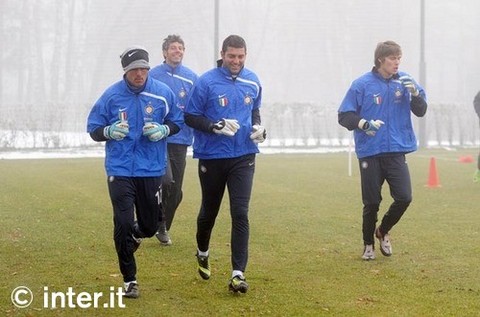