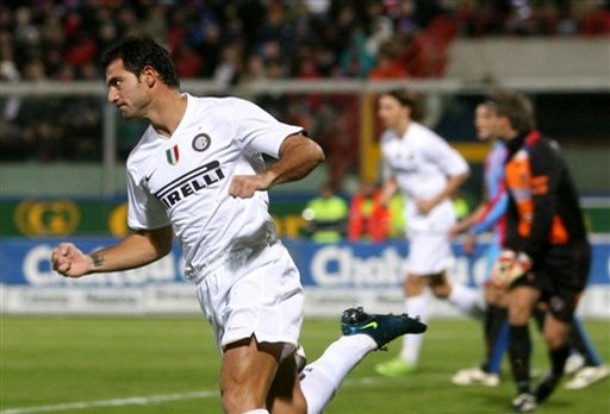 This game has helped to renew my faith in Inter as a team. After that horrific loss and last week's near draw against Sampdoria, this is just the kind of showing that demonstrates why Inter is at the top of the table. Despite going down to 10 men midway through the first half, we kept our wits about us and brought home 3 points. Even better, with the clean sheet, we have the best goal differential again (the details matter). This win, taken with the other results of the day (grazie Udinese e Genoa), put Inter 6 points clear at the top. Highlights after the jump.

This was by no means a great Inter game. Inter only had 44% of the possession and 5 corners to their 8. They had more shots on goal (22 to our 15) and we spent a good portion of the second half pinned in front of our goal. No, what this showed is that Inter is a team that can win even with the odds stacked against them. Instead of completely dropping back and trying to defend our slim 1-goal lead, we continued to attack. Mou must have been so happy as he watched from his sky box. 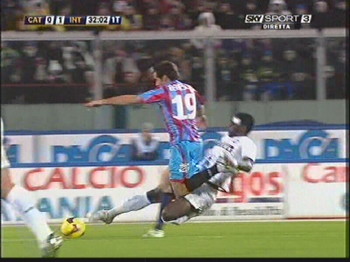 Really, everyone played really well. I am not even mad at Muntari - true, he was sent off, but I dont think it was a fair call. True, the foul was rash, but not worthy of a straight red. It is a bit telling that Muntari has only received a 1-match ban. Santon continues to show his talent - I hope to see him for many years to come in the black and blue. Julio Cesar had another great game as did Maicon and Cordoba. Nico is slowly working off the stigma of that Champions League game - he had a largely error free match against Catania.

Stankolicous continues to make me happy that Juve's fans raised that ruckus. He had a couple of dodgy challenges towards the end of the match, but the ref didn't seem to mind and that is all that matters. Cambiasso was almost flawless. I think he gave the ball away once, but that was because he lost his footing. The only real problem was Cruz who was looking a bit winded by the time he was subbed off midway through the second half. We even got a glimpse of the elusive Nelson Rivas this game. He even made a crazy bicycle-kick clearance.

All props to Giuseppe Baresi who, in front of a sell-out crowd at the Stadio Massimino, made his Serie A coaching debut. Great job! I have no doubt, though, that Mou was on the phone with him at half time. So, Beppe Baresi continues the 43-year-old tradition of not going down to Catania.

Oh, and did I mention? Julio Cesar rocked. 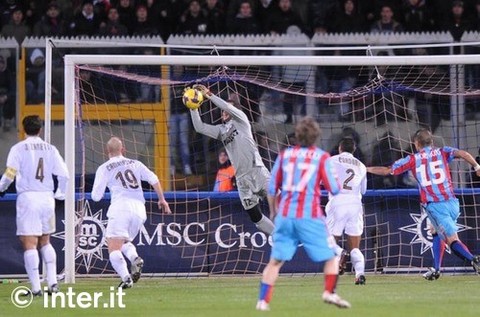 Ok, so now that we were starting to get bored with Adriano, we have a new drama queen to deal with. Mario Balotelli has reportedly been behaving like a spoiled brat. Word is, he was unhappy at being initially left of the squad list for Catania in favor of Adriano. Then, when Mou called him up after Inter lost the appeal over Adriano's ban, Balotelli "stormed out of training and returned home, snubbing his Coach."

Boy oh boy, the fastest way to make yourself look like a primadona that no manager would touch with a 10-foot pole is by pulling stunts like this. I am trying to cut him some slack, he is so young, but as this wears on, I think that Sando Mazzola may have something when he says:

"The strategy adopted by Mourinho is the correct one. The coach is trying to make the lad become a serious professional. The club is dong the right thing by not selling the player. When you have a young player with these qualities, he should be kept and developed. In my time such an attitude was not tolerable, but the world was different for young players than it is today. For Balotelli, who has the good fortune to have made significant gains in his life, it is easier to risk becoming a bad example for many young people who want to enter sports."

So today he had a meeting with Mourinho about his future - reportedly, Mario is concerned that Mou will give his Champion's League spot to Crespo. I have to say, I wouldn't blame Mourinho if he did. Crespo may have trouble hitting the back of the net but it is not for lack of heart or trying. Whatever his faults may be, Crespo would not pull a stunt like this.

Moratti has muddied the water with his statement today. He reiterated that Balotelli would not be leaving Inter and the he did not think Mario would be left off the Champions League list, adding "Mourinho is a person of common sense and knows what he must do." Is that a hint?

Moratti's explanation of Balotelli's latest snit is that he “had the idea of leaving. He changed his mind and then changed his mind again, but we have put a lot of faith in him because he is a quality player."

I guess that Mario is not too upset. He had time to go shopping for what appears to be perfume (or cologne, I guess) with his friend Davide Santon. Luckily the paparazzi were along for the trip (see below). All I know is that Mario had better not corrupt our cutie Davide with his bad attitude. For further reading, check out the article on Inter's up and comers (which is strangely focused on how tall each of them are).

Apparently Bologna has not been beating a path to Dacourt's door. Bologna have been leading the guy on for 20 days, then nothing. Poor guy, he is waiting day and night for the call, but no, Bologna has yet to commit.

Could be that we have loaned Obinna to Real Betis for the rest of the season. The only place I can find any word of it is on Goal.com and we all know how reliable they are.

THE NEW SCANDAL (or not as the case may be)

If you recall, last May Il Corriere della Sera leaked transcripts of calls between Inter staff and players and Domenic Brescia, a taylor for Inter. Brescia was arrested for drug trafficking soon after, pulling Roberto Mancini into the mess. Well, after the leak, Stefano Civardi, judicial police deputy prosecutor, ordered that the police investigate the leak, and, as part of the investigation, the police were also ordered to reconstruct what happened in the last days of the championship last May.

According to Il Gionale (a paper in Milan), the police have filed a three-page report largely dealing with the race between Inter and Roma and the fluctuations in the gap between the two teams at the end of the season last year. It also looks at the formations Mancini used and the impacts they had on the betting industry. The report analyzes how the bookmakers open and closed betting based on how many points there were between Inter and Roma.

The article says that the report seems to suggest, though never states clearly, that Inter deliberately "slowed its race to the title." As proof of this, the article cites Mancini's "odd choices" for formations and fact that Marco Materazzi took the penalty kick instead of Cruz in the game against Siena - and that the kick was subsequently saved.

Luca Fazzo writes: "It is clear that so little is not enough to accuse Mancini, Materazzi, or anyone else that they were in the pay of the bookmakers. And in fact - at least officially - there are no open cases against anyone."

So there you go. Did it ever occur to anyone that maybe Mancini was just a bad coach? And that the reason Ibra didn't play more was that he was legitimately injured? And maybe Manninger was just better than Marco on that day?

How about a little Davide and Mario shopping in Milan 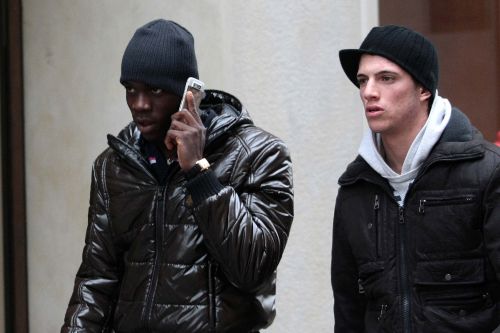 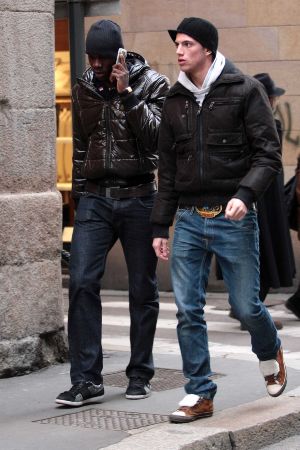