Share All sharing options for: Kirby's Derby Write-Up or How The Milan Derby Warps Young Minds 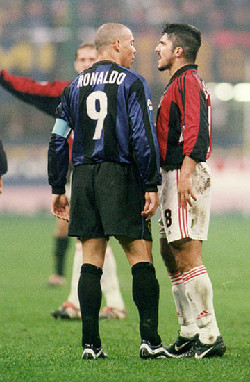 The Milan Derby conjures up strong emotions, the nature of which are largely dependent on what side of the Blue/Red divide you fall on and the final score. These strong emotions filter through to even the undecided - the once-neutral viewers find themselves swept up, unable to stop themselves from taking a side. Whether you watch the game for a passing fancy, or because you follow a player, the power of 22 men giving their all in front of 80,000 screaming fans will make you a partisan - if only for 90 minutes. The only question is, whose side are you on? The side of the scrappy underdog finally having its few moments in the sun? Or that of a criminal's all-powerful marketing/propaganda machine disguised as a sports team? Many would overlook the moral dilemma and choose the winner, seduced by the glory of victory. But a thoughtful few will gravitate towards the looser, finding solidarity through adversity.

For a look at a fan formed in the fire of defeat, Kirby brings you his favorite Derby, May 11, 2001:

This is going to be a bit of a surprise to you all, but my “favorite” derby match was the 2000/2001 demolition of Inter by Milan. I know what’s running through all your heads right now is “what the f***? Why is that your 'favorite' derby match?! You’re a fraud Inter fan”. I have good reason for calling that my “favorite”. It’s the day I realized how much I loved Inter and how much I hated AC.

It was a Sunday (I think) like any other. All my family was over of lunch as usual. After we ate, my cousins and I use to pile into my rent's room and watch a movie or football. That day was no different. I was only 11 at this point and didn't really follow football that much. Ronaldo was my favorite player back in those days and he was the reason I started to watch Inter. I wasn’t really a follower or a fan of the team (yet). This was all to change on that faithful day. 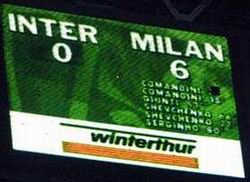 As I sat on my parent’s bed looking up at the tele I knew that something was going to happen. I could not determine whether the feeling I was getting was a good one or a bad one. As the game started I was feeling hopeful. Hope turned to sorrow very quickly during that match. As Commandini scored the first 2 goals I felt my heart sink. I never thought I could feel such emotion during a football match, especially since I wasn’t a fan of the team. Seeing the anger, frustration and disgust on Seb Frey’s face (there’s an example at point 2.56 in the video) as each one of those goals went in broke my heart. I couldn’t stand to see the cocky Milan players run around celebrating. That’s when I realized what was going on. I was no longer a fan of a player, but a fan of the club he plays for. 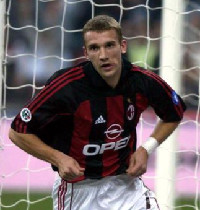 With love for one thing there comes hate for another and AC became the thing I hated the most for the next couple of years (since then Juve have surpassed them in my hate books). I didn’t hate them because they were our fierce rivals. I don’t know why I did. There was just something about them that I couldn’t stand! Just the sight of Shevchenko makes me feel sick.

Strangely enough, this story shows you how something horrible could make you realize how much you care for something. The pure feelings of love and hate are still with me to this day and I hope to God that Inter avenges that injustice during my lifetime.

So there you go, even in the depths of such a horrific defeat, Inter found at least one new fan that day. I have to say, a 6-0 win for Inter on Sunday seems so far-fetched as to be almost impossible. Now, a good 4-0 is well within the realm of possibility, though I would be overjoyed at a simple Inter 1 - 0 Milan.

If you would like to share your Derby thoughts and/or memories, email me at johonnars [at] gmail [dot] com . We have only 4 more days to work ourselves up into a proper frenzy. Plus, you could be famous. I was doing my usual search for Inter-related news (type Inter Milan into news.google.com) and this blog (and MAD's post) came up THIRD! Yep, it is just like having your name in lights for all the world to see!

(now everyone sing along)