Adriano Makes A Scary Cake and Other Spurious Gossip

Share All sharing options for: Adriano Makes A Scary Cake and Other Spurious Gossip 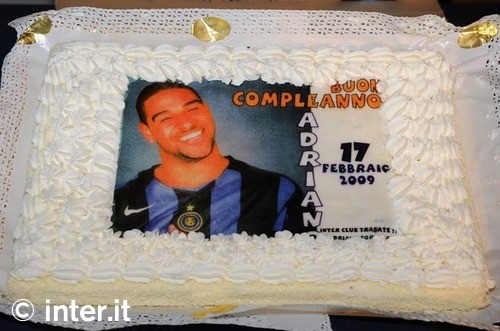 Yep, F.C. Internazionale is a huge, multimillion euro company and this is the cake they got for Adriano's 27th birthday? I dont know what is more shocking - the shabbiness of the cake, or that they got that thing in Italy. One would never guess a cake like that could be had in a country known for its cuisine. If someone had asked me, I would say that cake had come from Walmart. Even funnier, it looks like someone noticed how bad it was and tried to cover it with frosting. Too bad they only managed to cover a bit of the writing. I wonder who had to eat his face (chock full of food-colory goodness!).

In other, non-cake related news, Adriano will not be suspended after the possible handling incident during Sunday's derby. Sporting judge Gianpaolo Tosel said:

"The images on video don't clarify whether the player intentionally used his arm to score. The referee's view that the gesture was involuntary cannot be overturned beyond any reasonable doubt."

To tell you the truth, I dont know enough about the actual rules of the game to judge whether Adriano committed an offense during the Derby that should warrant a suspension or not. I will say that I was looking forward to a nice 2-match ban for him. That way he would be fresh and chipper for the Champions League games coming up. Oh well.

In one last little bit of Derby news, at Striscia la Notizia gave Ancelotti and the squad at AC Milan golden Tapirs to help them feel better after their derby defeat. Ancelotti is quite funny, asking if Rosetti will be getting one too. Beckham is confused, and Ronaldinho doesn't really seem to understand Italian.

I am just glad it is not Inter getting them for once. It is sort of strange seeing people like Pirlo and Ambrosini just in normal street clothes - they seem like much nicer people when they are in their skives.

Now I think we can safely move on from the Derby, yes? Yes. 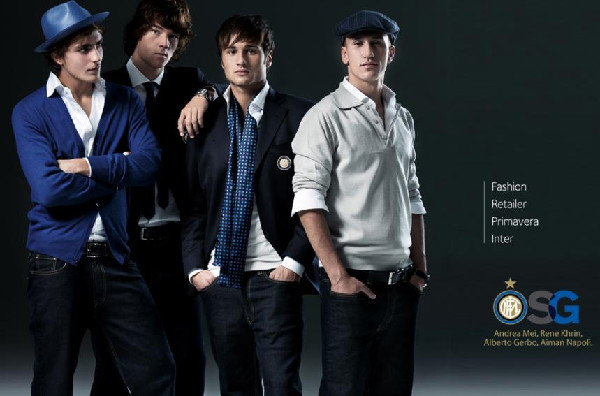 Between modeling sessions, Inter's Primavera squad beat Vicenza 3-1 and will continue on to the quarterfinals where we will face Maccabi Haifa from Israel. The three other match-ups in the quarter finals are Torino-Reggina, Juve-Siena, and Sampdoria-Palermo.

Good job boys, and lookin' good. In case you are wondering, that is (from left to right) Andrea Mei, Rene Khrin, Alberto Gerbo, and Aiman Napoli.

Apparently ex Veline and wannabe WAG Elisabetta Canalis has caught the eye of both Maicon and Balotelli.

Remember when Balotelli was late for the U21 training because he had been up late the night before partying at the nightclubs along Corso Como in Milan? Well he was with Canalis at a birthday party for Super-WAG (and also ex-Veline) Melissa Satta. For reference, Melissa Satta has just broken up with our old friend Bobo Vieri (well, technically, he is just about everyone's friend). It is rumored that while clubbing with the buxom Ms. Canalis, Mario was also making eyes at Melissa Satta which may prove problematic because Maicon was chatting her up as well.

Or so the story goes. Man, you would think there was an ex-showgirl shortage in Milan... Are there really not enough to go around? Maicon, time for you to settle down. Take a page from your compatriot Julio Cesar: get married and have a kid or two. Mario, stay away from those dirty girls!

Well, that is about it. Soon we will turn our minds to Bologna. I think the wards are empty so we may see a slightly different squad take the field... Maybe even Toldo!

I leave you with Elisabetta Canalis (who got a little cold and needed a sweater)... 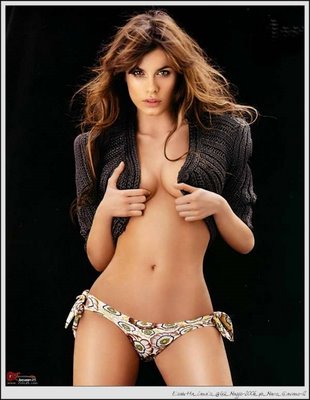 and Melissa Satta (who has forgotten almost all here clothes)...